Working with the BBA Ireland, Yulong Investments signed for €5,625,000 worth of stock during the first day of the Goffs November Mares Sale

Group 2-winning sprinter Ladies Church headed the opening session of the Goffs November Mares Sale on Friday when knocked down for €970,000 to Dermot Farrington.

However, the overriding theme of the day was the commitment of support from Zhang Yuesheng’s Yulong Investments towards his Group 1-winning two-year-old Lucky Vega ahead of his second season at the Irish National Stud. Bidding through Michael Donohoe of the BBA Ireland, Yulong’s Lucky Vega Syndicate signed for €5,625,000 worth of stock with which to support their 2020 Phoenix Stakes winner, who covered 152 mares during his first season at a fee of €15,000.

At €790,000, the well-related Galileo mare Aspiring was the most expensive of the day’s 19 acquisitions, falling to Donohoe’s online bid following a protracted duel with agent Mark McStay, taking instructions from Charles Shanahan.

The unraced Aspiring was bred by Coolmore out of Danedrop, making her a half-sister to the Arc heroine Danedream as well as a sister to the Group 3 winners Venice Beach and Broadway. Adding further to her appeal, however, was the fact that she is carrying her first foal by Wootton Bassett.

“Yulong sent Lucky Vega a stellar book of his own mares this year and is going to send him some more nice ones again in 2023,” said Donohoe. “He sent 30 mares last season and he’ll probably send some more next year.

“Yulong sent their own mares to Lucky Vega in Australia too [where he stands at Yulong] and he’s already had his first crop of foals down there. They’re getting rave reviews from breeders so he’s going to support him even heavier this year on the strength of that first crop.”

Indeed, young Galileo mares proved to be catnip to the operation, as illustrated near the end of the session when they paid €630,000 for Pleasant Dreams, a young Galileo half-sister to the Group 2-winning two-year-old and stakes producer Besharah in foal to Starspangledbanner, and €600,000 for Eaves, a sister to Group 3 winner Rain Goddess in foal to Wootton Bassett. Both were sold by Grenane House Stud.

The Yulong – BBA Ireland team also made a bold play for several mares within the sizeable draft belonging to the Niarchos family, notably by paying €530,000 for the Kilboy Estate Stakes winner Bocca Baciata, sold through Kiltinan Castle Stud in foal to Mehmas. Now a ten-year-old, the mare’s second living foal of racing age, the Galileo two-year-old Foniska, looked potentially smart when winning on her third start at Thurles for Jessica Harrington.

“Bocca Baciata is another for Lucky Vega as well,” said Donohoe. “Obviously Mr Zhang has horses in training with Jessie [Harrington] and she trained her so she recommended the mare to him. Jessie is high on the two-year-old sister [Foniska] that she trains too. He actually bought Lucky Vega’s sister as well. It’s undecided where she’ll go next year but she’ll go to stud in Ireland.” 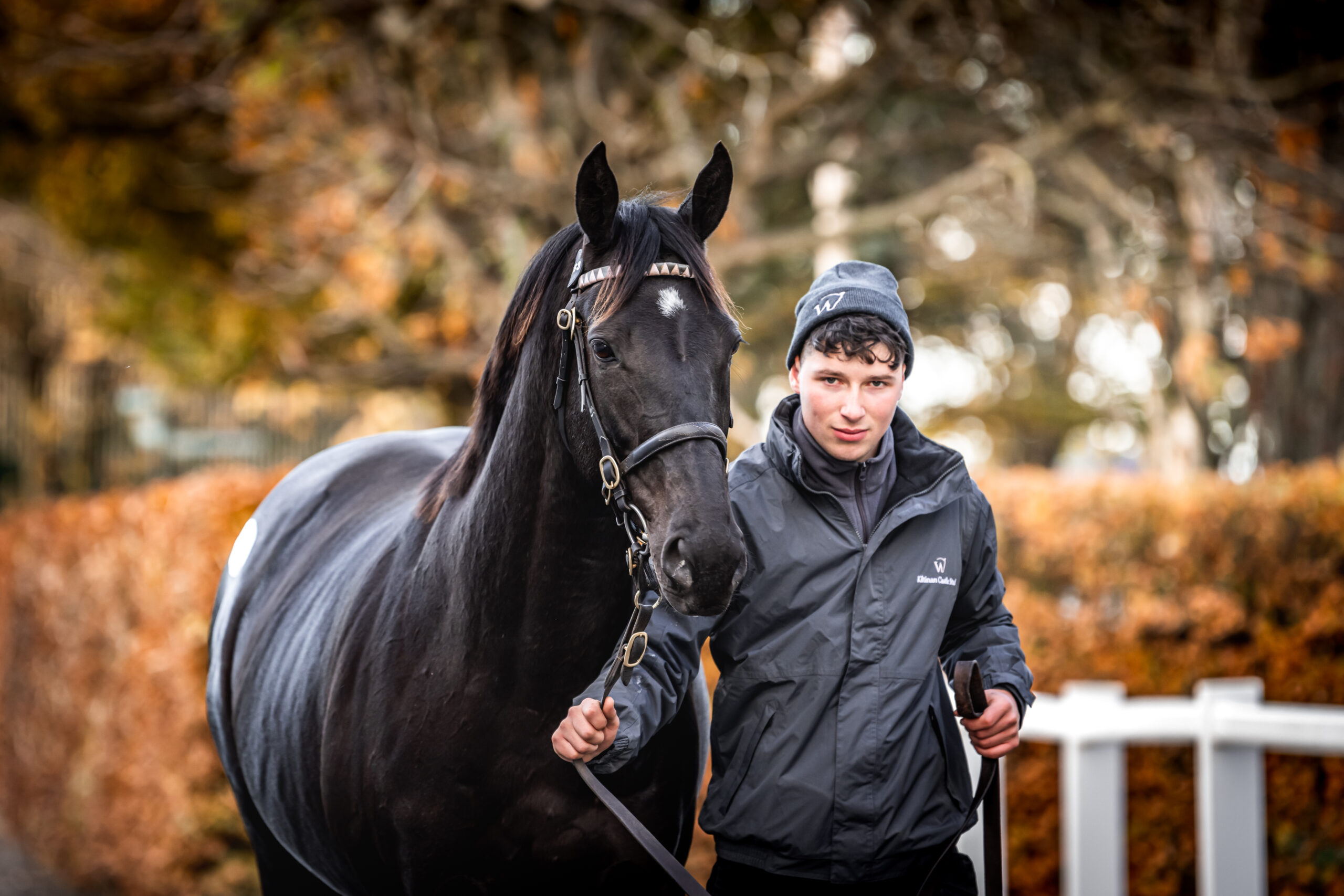 Also set to visit Lucky Vega next year is Albula, a stakes-placed daughter of Galileo who cost €500,000.

Raced by the Niarchos’ in partnership with Mrs John Magnier and Demi O’Byrne, Albula won first time out at Naas for Joseph O’Brien before landing valuable black-type when second to Zhang Yuesheng’s Magical Lagoon, subsequently winner of the Irish Oaks, in the Group 3 Flame Of Tara Stakes.

She is also particularly well-related as a Galileo daughter of Australian Group 3 winner Dawn Wall, herself a Fastnet Rock granddaughter of Robert Sangster’s Arc heroine Detroit.

“This mare is a lovely physical and she’s got that all important two-year-old black-type,” said Donohoe. “It’s a fantastic family and there’s still lots to happen as the dam is back in foal to Dubawi and there’s a couple of Galileos to come so we thought she represented good value – to be honest as she was number one on our list.”

Other significant purchases for the Yulong operation included Surely, a Galileo daughter of the champion Irish 1,000 Guineas heroine Again purchased for €520,000. Like Aspiring and Eaves, the four-year-old mare, who is a sister to the Group 1-placed Delphinia, is in foal to Wootton Bassett.

The stakes-winning Fadhayyil also came the way of Yulong on a bid of €410,000. The ten-year-old daughter of Tamayuz was a Group 2 winner and Group 1-placed on the track for Sheikh Hamdan and is already dam of the Australian Group 2 winner Turaath during her short time at stud. The mare was sold by Derrinstown Stud back in foal to that filly’s sire Oasis Dream.

Many of the purchases, notably Aspiring, Bocca Baciata, Pleasant Dreams, Eaves and Surely, were made by the team while utilising the sale company’s online bidding facility.

“Obviously he’s quite familiar with the online bidding in Australia, the online bidding format there has a couple of years head start on Europe, so he feels comfortable bidding that way,” said Donohoe. “That’s the way they do it in Australia and that’s the way it’s going here because you can bid in a nice relaxed atmosphere. We can nip down and look at the horses in the parade ring and do our final checks, then go up and have lunch and bid in comfort. We value the horses and we bid to what we think their value is so it doesn’t really matter who’s bidding against us. Sometimes when you’re bidding in the ring you can maybe go one or two bids that you might regret afterwards when you’ve been wrapped up in the theatre of it. It’s all a bit more composed doing it this way.”

Donohoe, however, did come off second best to Dermot Farrington for the session-topper Ladies Church. Bidding online while stationed in the ring, Donohoe cried enough at €970,000, leaving Farrington to sign the ticket.

Farrington was unable to reveal the identity of his client but did suggest that the filly is likely to remain in training. Trained by Johnny Murtagh on behalf of Mark Dobbin, the daughter of Churchill was the narrow winner of this season’s Group 2 Sapphire Stakes at the Curragh. 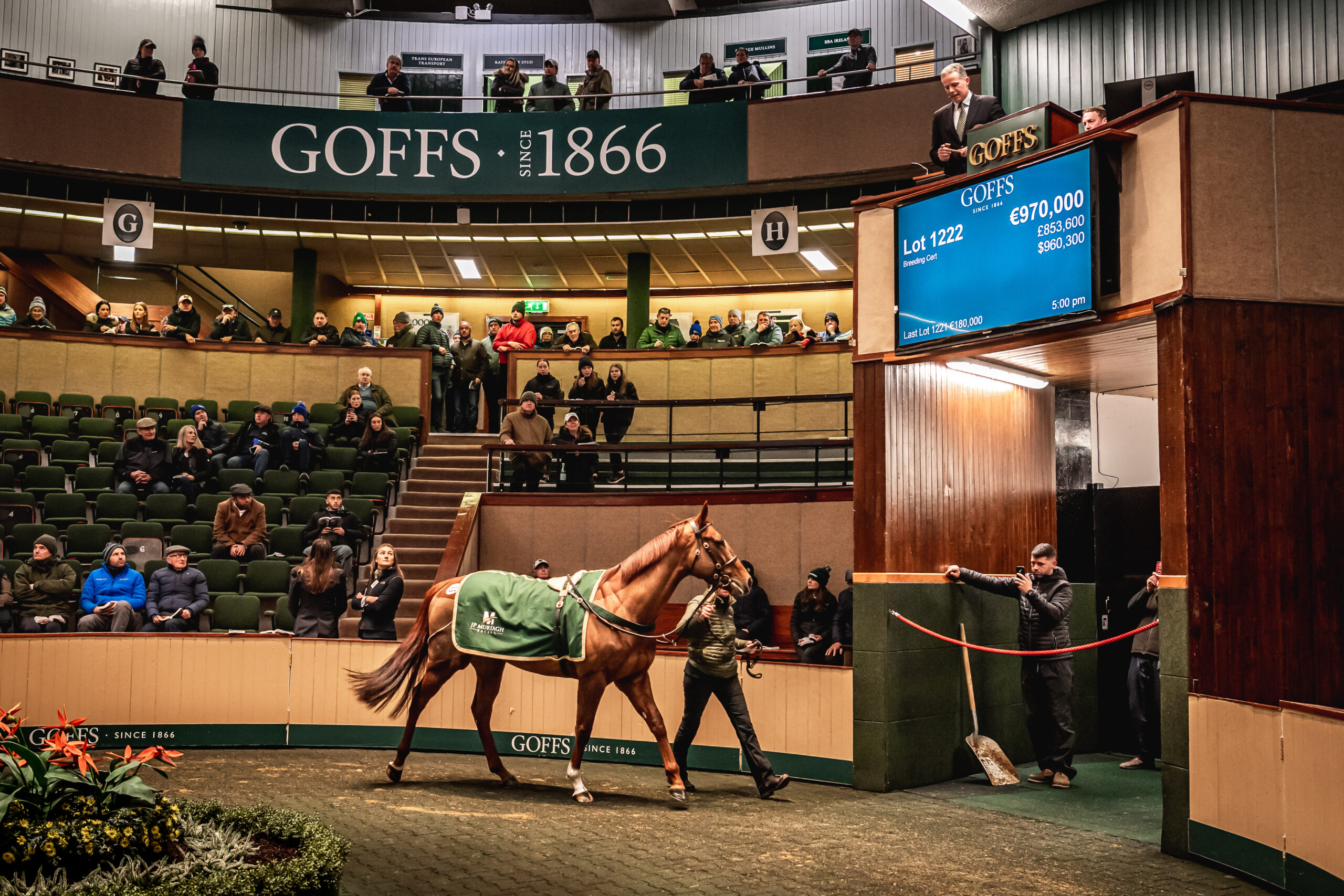 In addition to Fadhayyil, the Derrinstown Stud draft was also the source of stakes producer Yasmeen, who joined David and Diane Nagle’s Barronstown Stud on a bid of €520,000. A Listed-placed relation to Bahri, the daughter of Sea The Stars is the dam of this season’s John Musker Stakes winner Shaara and in foal to Night Of Thunder.

“With the help of God we’ll send her to No Nay Never,” said Nagle. “Listen, he’s the sire of the moment, isn’t he? This is a great pedigree and it goes back a long way. All we need now is a bit of luck.”

Classic producer Nictate is also destined to head into the hands of an Irish-based syndicate after falling to Adrian Nicoll of the BBA Ireland. Barren to Starman, the daughter of Teofilo owed her attraction to the exploits of her three-year-old son Maljoom, the winner of this year’s German 2,000 Guineas prior to running an unlucky fourth in the St James’s Palace Stakes. As such it was no surprise to see that colt’s former purchaser Federico Barberini make a bold play for the mare but he was forced to give best at €450,000 to Nicoll, taking instructions off Charles Shanahan.

“She’s for an Irish partnership and I should think she’ll stay here,” said Nicoll of the mare, sold by Limekiln Stud on behalf of Andy and Diarmuid Collins. “She’s good-looking, well-bred mare who has already bred a good horse – she didn’t take too much imagination. It was the top of the range but then you’ve got to pay to get these types of mares.”

The sale concludes with the final of two breeding stock sessions at 10am tomorrow. 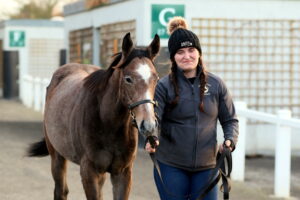 Up Next
Average rises 15% at vibrant Goffs November Foal Sale