All the way win for Josses Hill

Huntingdon’s premier race of the season – the Grade 2 Betfred Peterborough Chase – witnessed Josses Hill make almost every inch of the running to secure his biggest success to date over fences.

The eight-year-old, who had yet to really impress over fences, took his four rivals along from the outset. They included last year’s Feltham Chase winner Tea For Two, the 2015 Champion Chaser Dodging Bullets and 2014 World Hurdle winner More Of That.

The latter was looking to get his chasing career back on track also having pulled up on his last start in the BetVictor Gold Cup at Cheltenham’s November meeting.

In the hands of Noel Fehily, Josses Hill set an even tempo and jumped efficiently from fence to fence. The field closed up on the home turn with Dodging Bullets coming up alongside the leader under the returning Sam Twiston-Davies.

A quick jump at the second last saw Nicky Henderson’s charge gain a two-length advantage. He edged further ahead coming to the final fence which he winged and stayed on strongly up the run-in. His nearest pursuer Tea For Two was six-lengths behind come the winning post.

For Fehily, this triumph capped off a fine recent association with the Henderson yard, with first rider Nico De Boinville still sidelined with injury.

The two-mile-and-a-half prize has been kind to the Seven Barrows team. Now Henderson’s fifth victory in the race, his very first came 24 years ago with Remittance Man with none other than Richard Dunwoody in the saddle.

“His jumping has come together again. He was very good at Kempton three weeks ago and he jumped very well there,” reflected Henderson.

“You’d have to say this race was sort of set up in his favour, I think he’s better going right-handed and pretty sure he’s ground dependent.”

Chelsea Vice-Chairman, Alan Spence now enjoys a fourth Graded success over jumps as an owner. This his highest-rated National Hunt horse in training, only six months ago he was celebrating a Group 1 win in the King’s Stand Stakes at Royal Ascot courtesy of the Clive Cox-trained Profitable.

Spence said: “He did it impressively. He enjoyed it. He pricked his ears and bounded away at the end of it. He dictated the race and Noel gave him a great ride. He is not a bad jumper, he just jumps everything differently but is getting the knack of doing it.”

He added: “You can see by the way he ran and from what the jockey said that he would probably get a bit further, but going up four furlongs to three miles is a long way. As it stands the Ryanair would be the race for him at Cheltenham. It’s nice way to end the weekend.” 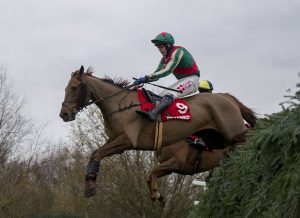 Up Next
Rouge scuppers fairytale comeback