Vieux Lion Rouge left it late to nab an exhilarating Becher Chase to give his trainer David Pipe a first win in the three mile and two furlong contest.

The story around the race was very much centred around last year’s winner Highland Lodge. Aboard again was Henry Brooke, who only seven weeks ago was in an induced coma having suffered serious injuries from a fall at Hexham.

He only returned to the saddle this week and the dream scenario looked like becoming a reality for much of the race.

Jimmy Moffatt’s ten-year-old led after the fourth and although hampered by a loose horse at the seventh was always at the head of affairs alongside Beeves.

This year’s Grand National runner-up, The Last Samuri came to challenge Highland Lodge two out with Vieux Lion Rouge and Tom Scudamore tracking them through on the inner.

The long-time leader hit the elbow with a two-length advantage over his nearest pursuers but then began to falter in the closing stages. Scudamore snuck up the rail on his mount and just got there to win by a short-head.

“He hasn’t been the strongest in a finish in the past, but I think he’s just a stronger horse now,” reflected Scudamore. “I’ve won the Grand Sefton before so to win another over these fences is great, it’s always emotional for us as a family because of granddad and Oxo.”

David Pipe, Grand National-winning trainer in 2008 with Comply Or Die, also wins the prize with a relatively young horse.

He becomes the joint-third youngest horse at seven to triumph in the race, with Indian Tonic and Silver Birch being the other two.

The gelding by the German-bred Sabiango was having his first outing since finishing seventh in the Grand National itself back in April.

He seems to respect the National fences more than park fences

Pipe said: “This has obviously been the plan for a while, but I wasn’t sure he was going to get there.

“He seems to respect the National fences more than park fences and we needed him to win a race to be high enough to get back in the National.”

He added: “Now we need to decide if he runs again, because if he loses you run the risk of his mark dropping. It might be that he doesn’t run again.” 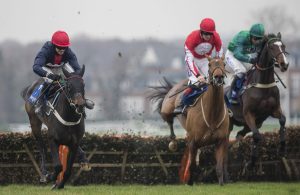 Up Next
Fourth Winter Novices' for King