In what turned out to be one of the closest finishes of the week at Royal Ascot, Twilight Son stuck his neck out to win the Group 1 Diamond Jubilee Stakes on the final day and claim top sprinting honours.

The son of Kyllachy, trained by Henry Candy and owned by Godfrey Wilson and Cheveley Park Stud, travelled well under Ryan Moore in an international field that featured representatives from Australia, America, Hong Kong and France. In a blanket finish with five runners spread across the track, the winner edged it by a neck from Hong Kong’s Gold-Fun and France’s Songs Of Blessing.

Having ridden the opening two winners on the card for Ballydoyle, Moore’s second Group 1 of the week put him two clear of his nearest rival Frankie Dettori in the race to be leading jockey.

“I rode him here last year, he felt like a very good horse and he’s taken a while to come to hand, but I felt Mr Candy was very confident about him,” said Moore. “He’s done very little wrong this horse, he’s only been beaten a couple of times and has proved himself a high-class colt.”

He’s done very little wrong this horse, he’s only been beaten a couple of times and has proved himself a high-class colt

Candy – who was celebrating his first Royal Ascot success since Pipedreamer’s Hunt Cup in 1979 – has proved to be a dab hand with top-class sprinters down the years, including with the likes of Airwave, Markab and Twilight Son’s sire, Kyllachy.

Candy said: “He’s a strong character. After York I’ve realised he needs an awful lot of work and I’ve been quite hard on him. He was slightly showing the results of that but he certainly stayed on well enough.”

The afternoon began with Aidan O’Brien claiming his sixth success of the meeting, courtesy of his two-year-old colt Churchill in the Listed Chesham Stakes. The son of Galileo’s only previous run came in a maiden at the Curragh, where he finished a creditable third behind Coventry fifth Van Der Decken. After being backed into warm favouritism, Moore made no mistake, holding off all challengers despite his mount hanging in the closing stages.

A seventh victory of the week for Coolmore quickly followed as Sir Isaac Newton, a one-time Derby hope, secured an unassailable lead in the final furlong to land the Wolferton Handicap from Godolphin’s Second Wave.

It was to be a fairytale final day, as Hardwicke Stakes victor Dartmouth survived a stewards’ enquiry to give the Queen her first Royal Ascot winner since Estimate’s Gold Cup success in 2013. Under French legend Olivier Peslier, the four-year-old colt came with a strong challenge from the back of the field to score by a head despite coming close to Ballydoyle’s Highland Reel. The sound of the claxon made it a nervous few moments for Her Majesty but no one was to steal the victory away.

It also meant Sir Michael Stoute’s grip on the Group 2 contest was to continue, having taken six of the last ten runnings. On top of this achievement it was a landmark 75th Royal Ascot success for the Newmarket maestro, bringing him level with the late Sir Henry Cecil as the winning-most trainer at the meeting.

Stoute said: “He’s a lovely quality horse and everybody in the yard is very fond of him.

“He’s stepped up all year. We put him into the John Porter which was run at Chelmsford and he was only rated 101 at the time – it was another step up in the Ormonde and another one here today.”

In the fiercely competitive Wokingham Handicap, trainer Robert Cowell gained his second winner of the week as Outback Traveller got up to win for owners the Lordship Stud and Mrs J Morley. Dropping back from 7f, the five-year-old gelding travelled best and got up in a tight finish under Martin Harley.

Closing the curtain on the 2016 Royal meeting was the Queen Alexandra Stakes over the marathon 2m5½f trip. The contest turned into a tactical affair, benefiting a well-positioned Commissioned, who went on to win by just under two lengths for Cheltenham Gold Cup-winning trainer Gordon Elliott. It also marked a third triumph of the week for pilot Adam Kirby, who topped off a magical five days which saw him become a father for the first time in addition to claiming two Group 1s. 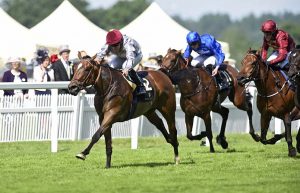 Up Next
Successive Coronation Stakes for Rouget