Jean-Claude Rouget – who currently holds the record as Europe’s winning-most trainer – sealed a second Royal Ascot victory with his three-year-old filly Qemah, who won the Group 1 feature the Coronation Stakes on day four of the meeting. Only 12 months ago, Rouget triumphed in the same race with Ervedya for this year’s Derby-winning owner the Aga Khan.

The daughter of Danehill Dancer was held up off the pace under Gregory Benoist, while Irish 1,000 Guineas winner Jet Setting, whose rags-to-riches story hit another level earlier in the week following her £1.3 million purchase at Goffs London Sale, took the field along.

As the 13-runner field stacked up into the home straight, Jet Setting was unable to pick up as she did in Ireland. A host of challengers fanned out, including Nemoralia and Alice Springs, who both met trouble in the run for home. All the while, Benoist had his filly positioned on the outside out of harms way and when asked his filly picked up in good style, running on well to win comfortably by just under two lengths.

In a week full of maiden Royal Ascot victories, the same was to be the case for Al Shaqab’s retained French rider Benoist, who won a Group 1 contest for the same connections last month when Jemayel landed the Prix St-Alary at Deauville.

“I take my time and today with this ground, she had a really good finish,” reflected Benoist. “Today my dream is in my head and I never can lose at this moment.”

For the prolific Pau-based handler, who wrote himself into the history books with a 6,000th winner back in April, successive victories in the Coronation Stakes advertised his sublime touch with fillies. Qemah had previously finished a close third in the French 1,000 Guineas.

Rouget said: “I was very confident after the French Guineas for this race because I prefer her with the turn.

“She was very nervous in Deauville and I think she didn’t run the race as she should have done. Today she did and won easily.”

The penultimate day began with the Group 3 Albany Stakes and featured the Richard Fahey-trained two-year-old filly, Queen Kindly, the first progeny of Frankel to grace the Royal meeting. Although acquitting herself well in third, the Aidan O’Brien second-string Brave Anna held on to claim the honours by a short-head under Ballydoyle stalwart, Seamie Heffernan.

There was a wide open feel to the King Edward VII Stakes beforehand, and it didn’t fail to produce an exciting finish. Frankie Dettori came out on top for the fourth time this week aboard the Sea The Stars colt, Across The Stars. The Sir Michael Stoute-trained three-year-old only ran in the Derby just shy of two-weeks-ago, but rewarded connections this time with a gutsy display, fending off the Coolmore favourite Beacon Rock.

In the second running of the Commonwealth Cup, Quiet Reflection made it a first Group 1 success for ex-jump jockey Dougie Costello, and a first British Group 1 for trainer Karl Burke, whose training career suffered a self-inflicted low point just a few years ago. The three-year-old filly travelled through the race much like she did last time out in the Sandy Lane Stakes at Haydock, and found enough to win in what was also a first top-level success for sire Showcasing.

For Costello, who has turned his attention to the Flat game, the triumph comes after only 38 wins on the level. The 34-year-old follows in the footsteps of Graham Lee having ridden a winner at Royal Ascot and at the Cheltenham Festival.

“She’s such an honest filly. She jumps and wherever you want to put her she goes,” said Costello. “She’s probably not picked up quite as well on the ground today, but courage and class took her all the way through.”

A stewards’ enquiry was called at the end of the Duke of Edinburgh Stakes, after Kinema, trained by Ralph Beckett, came with a sustained challenge under Fran Berry to pick up Godolphin’s Elite Army. As the five-year-old entered the final furlong, he swerved across towards the leader, squeezing up third-placed Ryan Moore and Kings Fete in the process. The first season Berry-Beckett partnership got their names on the scoreboard for the first time this week.

In the Queen’s Vase, which rounded off the day’s action, another Aidan O’Brien second-string, Sword Fighter, caused an upset at odds of 33/1, after being given a fine front-running ride by Colm O’Donoghue over the 2m trip. Victory saw the Ballydoyle team stretch their tally to five for the week. 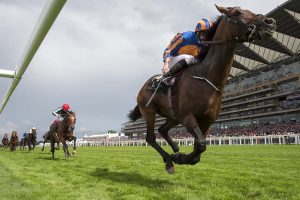