Turkish delight for Balding’s Blonde Me

By The Owner Breeder staff 05 September 2016

With combined prize money boasting £1.3 million over two days at the Turkish International Racing carnival at Veliefendi racecourse in Istanbul, it was no wonder that this year’s inaugural event saw British raiders claim four of the five international thoroughbred races.

Andrew Balding’s four-year-old filly Blonde Me got up in a bunched finish to land the £200,000 Group 2 Longines International Topkapi Trophy. The daughter of Tamayuz was waited with under Oisin Murphy and came with a sustained run to collar the Godolphin-owned Silent Attack by a neck.

The latter veered badly left a furlong out which arguably cost the three-year-old colt a few lengths, despite being straightened up by Mickael Barzalona in the run up to the line.

This overseas success for Balding comes at the end of a week which saw the Kingsclere maestro reach 1,000 winners as a trainer. This significant milestone was achieved by Qatar Racing’s Poet’s Vanity, who won the fillies’ maiden on Salisbury’s Thursday card by a commanding ten lengths.

For owner Mrs Barbara Keller tasting Group success abroad has become a familiar feeling in recent years. The Karl Burke-trained Odeliz who also sported the grey silks took three Group races in three different countries – Germany, France and Italy – the last of which a neck success in the Group 1 Premio Longines Lydia Tesio over one mile and two furlongs at Capannelle in Italy, was the mares’ swansong.

Over the past seven years in the four international races open to older horses, Brits have won no less than 22 of the 28 renewals.

Godolphin last year secured two of the four races with the former Richard Hannon inmate Toormore and Local Time. Although the wayward Silent Attack should arguably of made it three, the boys in blue matched their exploits of 12 months ago.

Move Up, a three-year-old son of Dubawi made no mistake in the Group 2 International Bosphorous Cup. Bringing strong British handicap form into the equation he soon stretched clear of nearest rival Fly By Me in the closing stages, with another Balding horse in the shape of Elbereth back in third.

On Saturday, Promising Run was the first part of the double when she prevailed by a hard-fought half-a-length from local challenger Willpower in the Group 3 Instanbul Trophy over a mile.

In the France Galop – FRBC Anatolia Trophy which kicked off the weekend’s proceedings, Manton-based trainer George Baker had something to cheer about as his eight-year-old handicapper Belgian Bill ran out a comfortable winner in the hands of Fergus Sweeney. 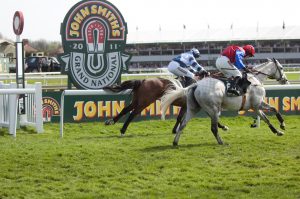 Up Next
Injured Thousand Stars retires