Tattersalls Chairman Edmond Mahony paid tribute to the resilience shown by the bloodstock market in 2020 on Thursday as it continues to react to one of the most challenging periods in modern history.

Mahony was speaking following the conclusion of the Tattersalls December Sale in Newmarket, a sale that at one stage appeared under threat of being delayed yet ultimately went ahead and turned over 73 million guineas. As ever, the bulk of that total was spent during the four-day mare sale, which closed with gross sales just over 43 million guineas.

“Traditionally at the conclusion of the Tattersalls December Mares Sale we would reflect upon the level of trade, both at the December Sales and earlier sales, and also record our thanks and appreciation to all those who have contributed throughout the year,” he said. “In this strangest of years our thanks to all concerned is an even more central message, but we should start by expressing heartfelt gratitude on behalf of the wider industry that the 2020 Tattersalls December Sales, Europe’s foremost foal and breeding stock sales, have been able to take place, under strict Covid-related protocols, on the advertised dates and with the minimum of disruption to the established cycle of the bloodstock sales season.

“We have been able to bring a testing sales season to a successful conclusion and for that we are enormously grateful. While the usual vibrance associated with this annual showcase of Europe’s finest breeding stock has, by necessity, been lacking, we have again been buoyed by the sustained resilience of the market and the extraordinary determination of buyers from throughout the world who have contributed to yet another 2020 Tattersalls sale which has defied the prevailing social and economic uncertainty.”

Only one lot during the two-week December Sale, Palace Pier’s dam Beach Frolic, broke the million-guinea barrier, when bought by MV Magnier for 2.2 million guineas.

“In addition to the obvious issues, we were conscious that this year’s December Mares catalogue lacked a little of the depth of recent renewals,” commented Mahony. “But nevertheless, quality consignments from Britain, Ireland and France have attracted buyers from throughout the world who have been active at all levels of the market, as ever demonstrating the enduring appetite for quality European bloodstock.

“While the undoubted highlight of the week was the 2.2 million guineas sale of Highclere and Floors Studs’ outstanding broodmare Beach Frolic to MV Magnier, encouragement can also be taken from the consistent global participation, with buyers from America, France, Japan, Kuwait, Qatar and the UAE all featuring amongst the leading buyers alongside new and established British and Irish investors.

“Buyers from throughout Europe, the Gulf region, Australasia, India, Kazakhstan, Libya, Morocco, Pakistan and Turkey have also been active and a particular feature of the sale has been the prolific use of the live internet bidding facility which has allowed so many buyers unable to attend in the usual manner to participate successfully.

“More than half of the lots offered this week have attracted internet bids and it has been notable that the online action has been at every level of the market, including the very top end.”

Tattersalls reported that 1,637 internet bids were accepted overall from 75 individual bidders. That resulted in the sale of 136 horses for a total of 3.091 million guineas.

“The implementation of the live internet bidding platform is a perfect illustration of how all involved in this industry have successfully adapted and responded to circumstances outside their control, as is the mutual cooperation with our counterparts at Goffs and Arqana which has allowed us all to adjust sales dates when needed,” said Mahony.

“We have staged an unprecedented 16 sales at Park Paddocks since the end of June and after every one of them we have reflected on the admirable patience and determination which everyone has shown to overcome unprecedented obstacles.

“The world has been thrown into turmoil, but every single participant at our 2020 sales should be applauded for the manner in which they have accepted the demands presented by the global pandemic. Few will look back on the 2020 Tattersalls sales season with pleasure, but they can look back with pride and our thanks go to each and everyone who has contributed to a Tattersalls sales season of remarkable resilience.” 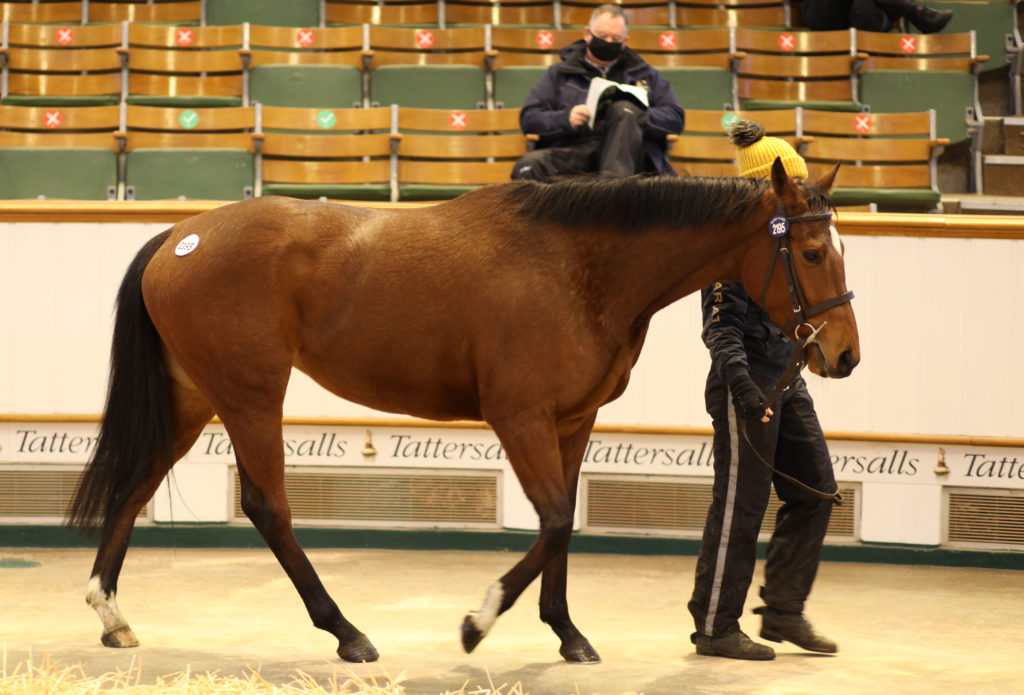 Thursday’s final session of the Mares Sale was predictably low-key.

With each of the lots to realise 23,000gns or more unsold, it was left to Banmi, a winning two-year-old daughter of Kodiac, to lead the way on a valuation of 21,000gns from Howson & Houldsworth. The filly is a half-sister to the Listed-placed Moonlit Gardens, herself dam of the Group 3-placed Mokaatil.

“We’ve bought her for a French client,” said Howson via telephone after bidding through Paul Thorman. “She was quite small, but she has speed in the pedigree and that’s what the client wanted. The Kodiac over Night Shift cross was very appealing too.

“I don’t know who she’ll be covered by yet, but she’s going to be a broodmare and as she’s heading to France, she’ll visit a stallion in Normandy.” 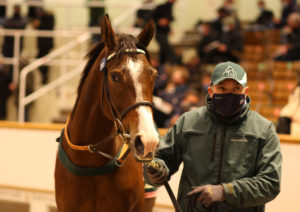 Up Next
Peter Brant dips into Juddmonte draft for Cressida