Renowned for offering breeders a chance to buy into some of the best bloodlines in the Stud Book, the annual Juddmonte draft of fillies at the Tattersalls December Mares took centre stage on Wednesday.

Demi O’Byrne fielded the bids while Tammy O’Brien sat alongside taking instructions on the phone to secure the three-year-old who had won a seven-furlong novice fillies’ stakes on debut at Kempton last July.

A half-sister to the Grade 3-winning Grand Jete, Cressida is out of the Group 2-winning mare Modern Look who in turn is a sister to the Listed-winning Arabesque – dam of Whitsbury Manor Stud’s exciting sire Showcasing.

It was no surprise to learn later on Wednesday evening that Cressida will visit Brant’s Prix de l’Arc de Triomphe hero Sottsass during his first season standing at Coolmore Stud in County Tipperary where he will command a fee of €30,000.

Another Juddmonte filly to sell well on Wednesday was the placed Kingman mare Brinjal, who was bought by Marc-Antoine Berghgracht of MAB Agency on behalf of Haras d’Haspel in Normandy for 190,000gns.

The three-year-old is out of the Sadler’s Wells mare Clepsydra and is a half-sister to Falmouth Stakes heroine Timpiece and Criterium de Saint-Cloud winner Passage Of Time, the dam of Group 2 winner and now sire Time Test. The further family includes multiple Group 1 hero Twice Over.

Berghgracht said: “It is just a lovely family. She has been bought for French breeder Jose Delmotte [of Haras d’Haspel]. The farm started in the last two or three years.

“We just like her, the pedigree is very active – plenty of fillies are in there, it is a really moving pedigree. The page could look different next year.

“We will think what we will do about stallions, we will probably ask Juddmonte what their suggestion would be!”

Twomey hoping to work his magic with Stormy Girl

Having masterminded the transformation of Sonaiyla, who went from handicapper to Group 1-placed filly before selling for 900,000gns on Tuesday, trainer Paddy Twomey secured an exciting prospect with the purchase of the Listed-winning Stormy Girl for 310,000gns.

A daughter of Night Of Thunder, Stormy Girl secured black-type when she captured the Flying Fillies Stakes at Pontefract in August for trainer Rebecca Menzies and owners Stonegrave Thoroughbreds.

Twomey said: “She’s a nice filly who will hopefully continue to progress for a client for whom we have done well before.

“She’s shown ability and has been progressive – she’s been unlucky in a few races and if the cards go her way in a few races, hopefully she’ll do well. You have Tiger Tanaka under the second dam so it’s a deep pedigree too. She has residual value.”

Menzies added: “She has been absolutely amazing for us; she has improved as the year has gone on. Even over the last four weeks since we have backed off her, she has improved physically, she has strengthened up a lot.

“There is loads more to come from her as a racemare, and she is going to make a brilliant broodmare down the line. Somebody is going to have a lot of fun with her, and a lot of success at a higher level.”

Despite no lots breaking through the seven-figure barrier there were a total of 11 horses that sold for 100,000gns or more during Wednesday’s session, while the clearance rate was a healthy 88%. 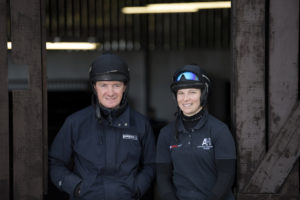