While the battle for the jockeys’ title is set for a thrilling climax at Ascot on Saturday, the race to be champion trainer is no less exciting.

Less than £570,000 separates the trio of Charlie Appleby, Andrew Balding and John and Thady Gosden – closely tracked by Mark Johnston, Aidan O’Brien, Richard Hannon and William Haggas – and with £4 million in purses up for grabs on QIPCO British Champions Day, weekend events will be pivotal in the trainers’ championship.

Splitting the Newmarket powerhouses of Appleby and the Gosdens is Kingsclere-based Balding, who has enjoyed his best year to date in terms of both winners – 133 at the time of writing – and prize-money won, his haul of £4.1 million almost twice the total banked in 2020.

Balding, who is bidding for his first trainers’ title and currently sits £253,000 behind Appleby in the table, said: “Everything has gone pretty much to plan this season – we’ve probably been punching above our weight a little bit. We were fourth in the championship last year, so it’s not come totally from left field, but at the same time you need everything to go right – and you need a horse like Alcohol Free to go and win you almost £1 million in prize-money!

“I don’t think anything will be decided until the last race on Saturday has been run. It’s a nice sub-plot, especially with the jockeys’ championship [race], and although the trainers’ title goes on until the 31st, if there’s more than £200,000 in anyone’s favour it will be virtually impossible to make that back after Saturday.

“British Champions Day was designed to be that pivotal day and quite rightly it’s the day where you have to perform if you want to be in the title chase.”

Balding’s success this season has been built on strength in depth throughout the age groups for a variety of owners, including Kirsten Rausing’s Royal Ascot-winning juvenile Sandrine, the aforementioned three-year-old Alcohol Free for Jeff Smith, winner of the Coronation Stakes and Sussex Stakes, and older horses such as King Power Racing’s Bangkok and Spanish Mission, owned by Team Valor and Gary Barber, both successful at Group 2 level in 2021.

The trainer, who has explained previously his vision to build up support from different owners, continued: “It’s extremely rewarding to have that breadth of people who are supporting the yard. I’m in a very fortunate position.

“The key to Kingsclere is trying to attract the best owners around and we’re luck to say we are.

“It’s just great to be involved [in the title race] and it would be a wonderful accolade, but the most satisfying thing is winning big races and if that comes with it then great. It’s all about competing in the big races and winning as many of them as you can.” 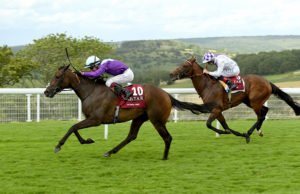 The master of Park House Stables is taking a strong team to Ascot on Saturday, with eight runners across the six-race card, led by his triple Group 1 heroine Alcohol Free, set to take on star colts Palace Pier and Baaeed in the Queen Elizabeth II Stakes, perhaps the race of the season so far.

“We’re well represented – this isn’t an afterthought for any of my runners,” Balding explained. “This has been the target whereas in previous years we have gone into Champions Day clinging on in there and rolling the dice a little bit.

“Alcohol Free has had a break since York. She has gone slightly in her coat, like fillies often do this time of year. She started off in a Guineas trial and it isn’t a given that she will bring her best form to the table. Historically, a lot of fillies can perform below par at this time of the season having started early in the spring.

“However, her work has been good and she looks well, and of course she is hugely talented. I have no doubt if she’s anywhere near her best then she has a big chance. Hand on heart, on her day, I think Alcohol Free is as good as any of them. If she’s at her best she’ll be there or thereabouts on Saturday. Whatever wins will be champion miler.

“We also have Invite in the Fillies & Mares. We haven’t had her that long, but she won well for us first time out at Chester. She doesn’t do a lot at home, but conditions should suit and she’s not without a chance.

“Berkshire Rocco has a squeak in the Long Distance Cup against Stradivarius and Trueshan. He finished second in the St Leger last year and is a high-class horse. He’s an outsider but [Champion Stakes entry] Foxes Tales is proven in these conditions and he was giving nine pounds to Dubai Honour when he touched him off at Newmarket earlier in the year. He could be placed.”

Balding also has a keen interest in the jockeys’ title race; both Oisin Murphy and William Buick graduated from the famed Kingsclere academy, with the former taking the ride on Alcohol Free – who is set to stay in training as a four-year-old – in the Queen Elizabeth II Stakes.

“I would count them both as friends,” the trainer said. “Oisin rides a lot more for me now than William does but Will still rides for me as and when. I’d be delighted to see either of them win and the best result for us would be a tie!

“Whoever they were with they would have made it – both have tremendous ability – but I think everyone connected with the yard, particularly the ones that have been here with both of them, will take great satisfaction from seeing them do so well.” 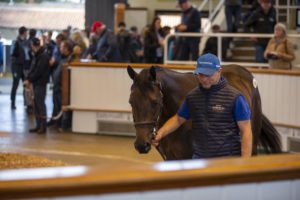