‘New record turnover at any sale is always an achievement, but for Europe’s largest yearling sale to reach new levels as we all strive to return to normality after 18 months of turmoil is pretty extraordinary’

A colt by the ascendant Time Test set the seal on a record-breaking renewal of Book 2 of the Tattersalls October Sale in Newmarket on Wednesday when selling for 400,000gns to SackvilleDonald.

His sale represented an almighty profit on the 56,000gns that he had cost connections, ‘Otilia’, last December as a foal. Of course, no one had any idea how successful Time Test might turn out to be back then – and indeed this colt was his most expensive foal sold last year. The National Stud resident has stood for just £8,500 throughout his stud career to date and fast forward almost a year, is one of the ascendant stars of the British stallion scene thanks to a clutch of winners that include the Group 3 scorers Romantic Time and Rocchigiani, Group 1-placed Sunset Shiraz and Listed winners The King’s Horses and Tardis.

All of which helped to make this colt, a son of the Rainbow Quest mare Aurelia who had done exceptionally well physically in the intervening time, a standout of Wednesday’s session. As such, he was followed in by a deep crowd and as the bidding rocketed from the opening 50,000gns mark, matters ultimately came to rest between Johnno Mills of Rabbah Bloodstock, Richard Hughes and Alastair Donald, with the latter emerging successful at 400,000gns on behalf of King Power Racing.

“He was my favourite horse of the week,” said Donald. “We decided to hold out for him, and it was a gamble worth taking.

“He’s a beautiful-looking horse, the stallion’s on fire and the mare has produced a third in the Oaks. He’s a proper Classic type. We knew he would make a lot of money, and I’m thrilled to get him.” 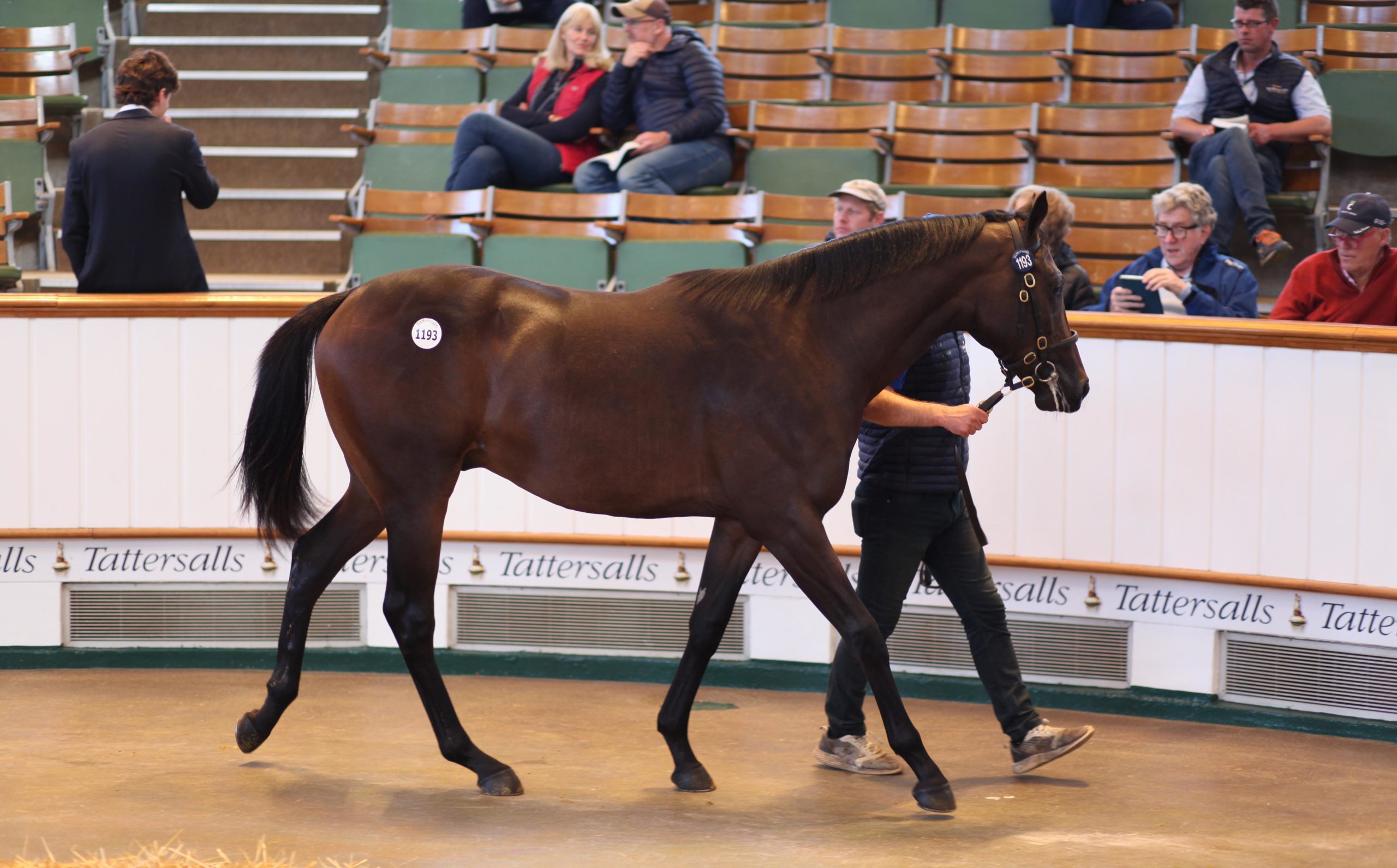 This Time Test colt topped the final day of Book 2 of the Tattersalls October Sale at 400,000gns. Photo – Tattersalls

Vendor John Foley of Ballyvolane Stud was understandably delighted with the result.

“Since we have had him he has been amazing,” said Foley. “He is a special horse, the best we have ever had. His attitude, his presence – he is a ‘wow ‘horse.

“He was a lovely, quality straightforward foal and very well produced by the National Stud – there is a reason he was the dearest Time Test foal.

“There are some that are nice foals who come back as nice yearlings, but he has done better than we thought. It has developed and he has improved the whole way through.”

He added: “Otilia is myself and three friends, and he is the first one that we have pinhooked together. We wanted to take a punt on the stallion. It was a fair throw for him as a foal, we were taking a punt on Time Test but sons of Dubawi have done well. Time Test has had a great year. He has not surprised us but maybe he is a stallion who has gone above and beyond what people thought. He looks very good and his stats are good. I will definitely be using him next year!”

He added: “It is amazing to get a result like this. This is a very tough business as there are more hard days than good days. We have great help at home. Donnacha Higgins helps me at home and John, my dad, who is 77, mucks out every day.”

The colt is a half-brother to the 2016 Oaks third Harlequeen and was bred by Richard Moses and Joe Callan out of the winning Aurelia, a Rainbow Quest member of the Luca and Sara Cumani’s Free Guest family. There aren’t too many Rainbow Quest mares out there now; in fact, Aurelia was 19-years-old when this colt was foaled.

Remarkably, those levels were achieved without the participation of Shadwell Estates, traditionally such a strong player at this sale. Activity from Godolphin also appeared to be muted, although Rabbah Bloodstock were active, paying a total of 798,000gns for 11 lots.

“At the end of Book 1 of the Tattersalls October Yearling Sale last week we referenced the depth and diversity of the demand, and the momentum established at Book 1 has been very much sustained throughout the three days of a record-breaking Book 2,” said Tattersalls Chairman Edmond Mahony.

“New record turnover at any sale is always an achievement, but for Europe’s largest yearling sale to reach new levels as we all strive to return to normality after 18 months of turmoil is pretty extraordinary. Only ten years ago Book 2 of the October Yearling Sale had turnover of a fraction over 25 million guineas and an average price below 40,000gns. This year’s October Book 2 has broken the 50 million guineas mark for the first time, produced a record average in excess of 80,000gns and also an unprecedented median.

“Similar to Book 1, international buyers have again made a massive contribution to the market, with notable participation from American and Australian interests as well as from Hong Kong, Japan and throughout the Gulf region, but perhaps the most encouraging feature of the record-breaking sale has been the domestic demand. British and Irish trainers have been the backbone of the sale and to see such a voracious appetite for quality yearlings, not only at Books 1 and 2 of the October Yearling Sale, but also at our Newmarket based yearling sales last month, has been fantastic.

“As ever, we are hugely indebted to the consignors from Britain, Ireland and further afield, who make Books 1 and 2 of the October Yearling Sale the showcase for so many of the finest yearlings to be found in Europe. Consistent quality is the key to attracting the buyers in such numbers and we now turn our attention to Book 3 of the October Yearling Sale where buyers will continue to find yearlings of the highest calibre.”

Breeder Tim Bostwick of Biddestone Stud had earlier been left speechless after watching the stud’s homebred son of Ribchester sell out of the Barton Stud draft for 350,000gns to the Hong Kong Jockey Club.

Working with Oliver St Lawrence, the Bostwicks paid €55,000 for his dam Vitello at the 2016 Goffs November Sale and subsequently bred this season’s smart two-year-old Andreas Vaselius, runner-up in the Group 3 Anglesey Stakes, out of the mare.

“I don’t know what to say, I’m shocked,” said Bostwick. “It’s much better than we expected. I haven’t lost faith in Ribchester but we were unsure how the market would react.

“Her second foal, Andreas Vaselius, was originally bought for Hong Kong and that may have attracted these guys. Once again, we have to pay credit to Tom Blain and his team at Barton, they always do such a fantastic job.”

Vitello has a filly from the first crop of Ten Sovereigns in the pipeline. “We liked the Caravaggio so much [Andreas Vesalius] that we thought we would go back to the same line,” said Bostwick.

“The half-brother is now in Hong Kong but I don’t think he has run yet,” he said. “This is a gorgeous horse, but that is a gorgeous price, too!

“This is the first by Ribchester that we have bought so we hope he is lucky – he is a beautiful horse, a standout for us.”

His 350,000gns price tag was later matched by a Zoffany filly who sold to Thady Gosden and a daughter of Wootton Bassett who was knocked down to Matt Coleman of Stroud Coleman Bloodstock.

The Zoffany filly was sold by Kilcarn Park and shares her granddam, Group 3 winner Acts Of Grace, with none other than Mishriff, a current star of the Gosden stable who is on course to run in Saturday’s Qipco British Champions Stakes at Ascot.

“She is brilliant moving filly, she has some class about her,” said Gosden. “She is an exceptional type and it is a happening pedigree that we know well – it will be nice if she is the same as Mishriff on the track!

“She is for a new client, and hopefully she will do well for them. It’s a very nice pedigree, so will have some residual value, too.”

Coleman, meanwhile, was working on behalf of Anthony Stroud to land the Wootton Bassett filly. Offered by Haras d’Etreham, she had been a €120,000 pinhook by Canirola Bloodstock out of last year’s Arqana December Sale, and is well-related as a sister to the Group 3-placed Dave. Granddam Toupie was a Group 3 winner who ran second in the Poule d’Essai des Pouliches.

“I’ve bought her for Anthony [Stroud], who couldn’t be here today, on behalf of an unnamed client,” said Coleman.

“She’s just a great-moving filly and we thought she was pretty much the filly of the sale. We bought the filly Audarya by Wootton Bassett, who has been lucky for us, and obviously he’s become a fantastic sire so we’re delighted to get her.”

Stroud Coleman ended the sale as leading buyer thanks to the purchase of 20 yearlings worth 3,240,000gns. 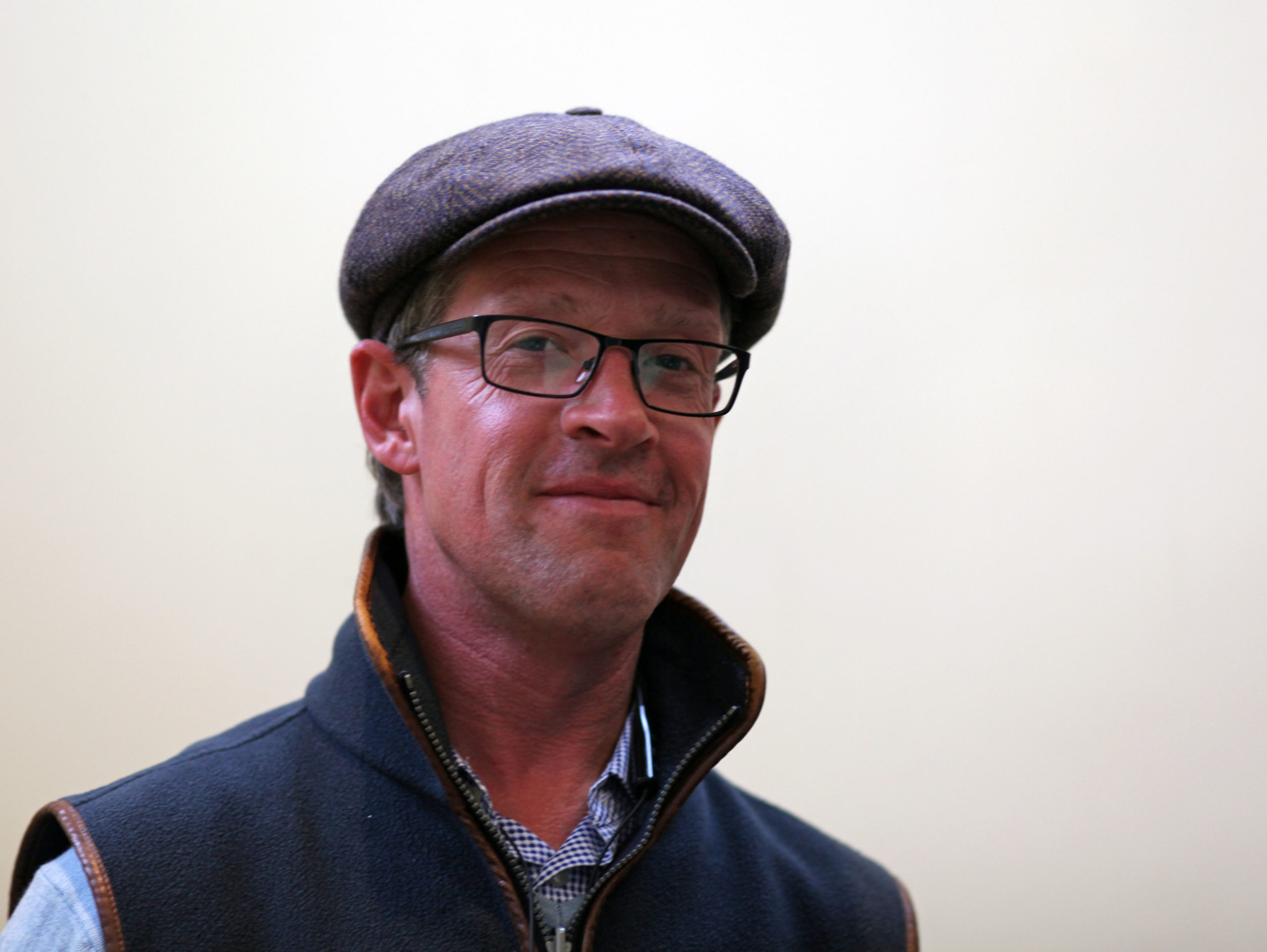 Another Kodiac for McElroy

The session was quick to burst into life with the sale of a Kodiac colt, the sixth horse into the ring, for 285,000gns to American agent Ben McElroy.

McElroy has more reason than most to zone in on Kodiac, having purchased his dual Group 1-winning daughter Campanelle on behalf of Barbara Banke’s Stonestreet Farm at the October Sale two years ago. He returned to the well on Tuesday evening to purchase another filly by the stallion for 340,000gns on behalf of Stonestreet and was delighted to add yet another Kodiac to his haul yesterday morning. 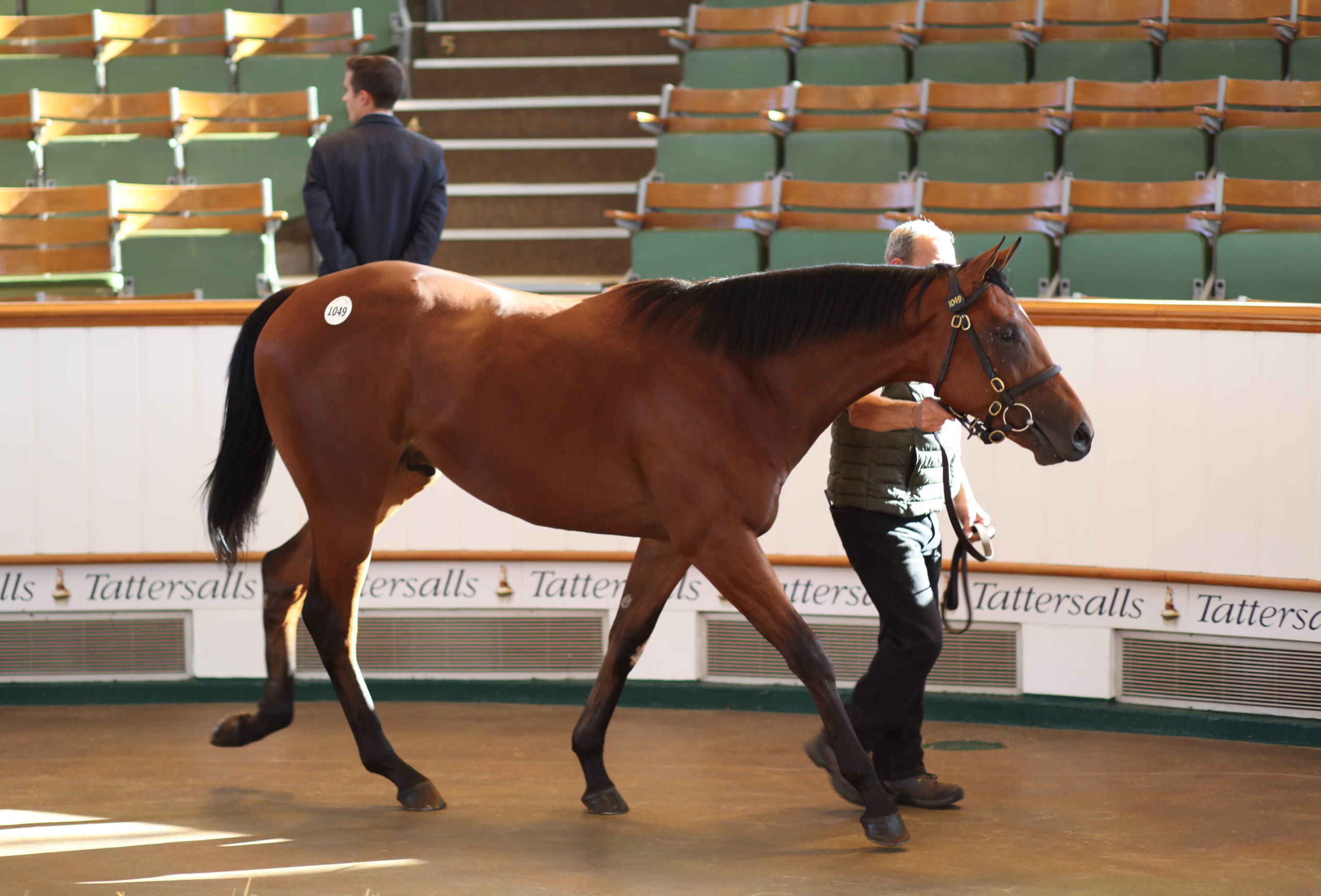 This Kodiac colt is set to head to the US after selling to Ben McElroy. Photo – Tattersalls

As with Tuesday’s purchase, the colt is set to head to the US.

“It is very early in the morning in the US, but I saw the horse and for me he is the best colt in the sale – maybe the best horse I have seen since I have been at European sales,” said McElroy.

Bred by Epona Bloodstock and sold through its Croom House Stud, he is a half-brother to this season’s talented two-year-old Cashew and the second foal out of his placed dam Taste The Salt, a Born To Sea half-sister to Norfolk Stakes winner Baitha Alga.

The Tattersalls October Sale continues on Thursday with the first session of Book 3. 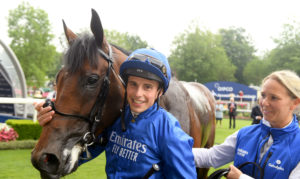