“When you’re riding for Willie Mullins, you’ve always got a chance no matter what price they are”

Tornado Flyer sprang a 25/1 surprise in the King George VI Chase at Kempton Park for Willie Mullins on Sunday to hand Ireland its first winner of the race since Kicking King in 2005.

Although a Grade 1-winning bumper performer as a young horse, Tornado Flyer was seeking his first win since December 2019, when successful in the Grade 3 Klairon Davis Novice Chase at Navan. Thus, in a renewal of the King George that featured reigning Cheltenham Gold Cup winner Minella Indo, last year’s King George hero Frodon, the 2018 and 2019 King George winner Clan Des Obeaux and last season’s leading novice chaser Chantry House, Tornado Flyer was understandably cold in the betting despite the fact that he hailed from the all-powerful Willie Mullins yard.

As it turned out, Tornado Flyer was aided by a frenetically fast pace set by Frodon under Bryony Frost. Minella Indo, who briefly challenged Frodon for the lead going out on to the second circuit, cried enough under Rachael Blackmore halfway down the back straight while a bad mistake by Chantry House not long after prompted his jockey Nico de Boinville to call it a day and pull up.

Meanwhile, Saint Calvados, making his debut for Paul Nicholls following a 323-day absence had cruised into the leading rank alongside Clan Des Obeaux and Willie Mullins’ other runner, Asterion Folonge. Clan Des Obeaux still had the advantage approaching the second last only for Tornado Flyer to come with a wet sail down the outside and take up the running. With Asterion Forlonge staying on well under Bryan Cooper, there was briefly the prospect of a Mullins one-two but Asterion Forlonge crumpled on landing at the last, leaving Clan Des Obeaux to lead home the chasing pack.

At the line, Tornado Flyer had nine lengths to spare over Clan Des Obeaux, who in turn was three-and-a-half lengths clear of the third Saint Calvados. 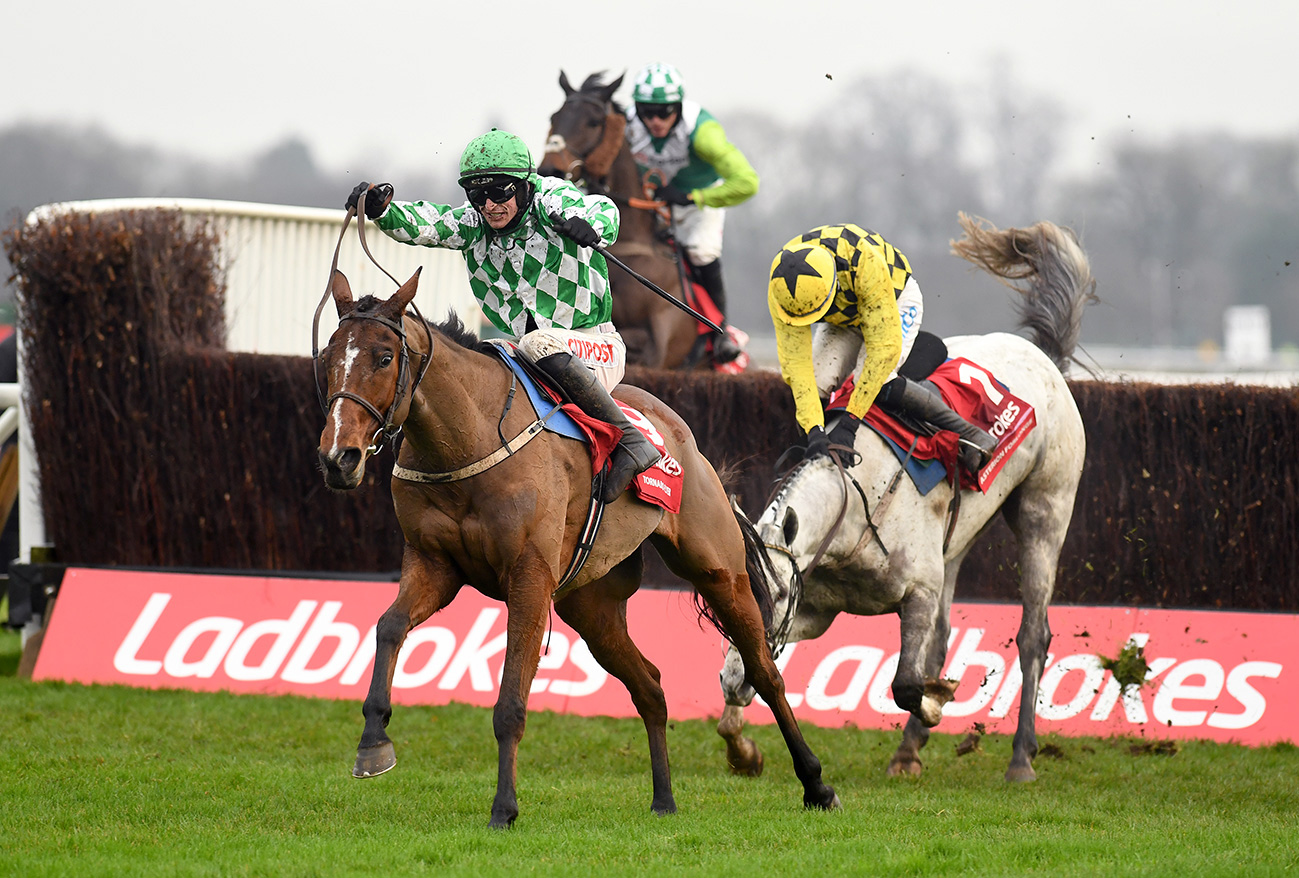 His win sealed an excellent day for jockey Danny Mullins, who had come to Kempton having never ridden a winner at the track yet left having celebrated two following the earlier success of Jacamar.

“I didn’t think he was totally out of this,” he told ITV Racing. “When you’re riding for Willie Mullins, you’ve always got a chance no matter what price they are, and this lad has always had the promise to deliver something like this, so we thought we had a squeak.

“From going away the second time round, I was starting to come alive and halfway down the back I was able to take him back and start filling him. Even coming down to the last, he was on his own and was probably idling – I could have done with Asterion getting to me as I had a little bit left.”

Now the winner of six races, the TFP Partnership-owned Tornado Flyer shares his sire Flemensfirth with the likes of Imperial Commander, Lostintranslation, Flemenstar and Waiting Patiently. He was bred in Ireland by Sweetmans Bloodstock out of Mucho Macabi – she is a daughter of Flat speed influence Exceed And Excel yet boasts excellent jumping connections as a half-sister to Hurricane Fly. 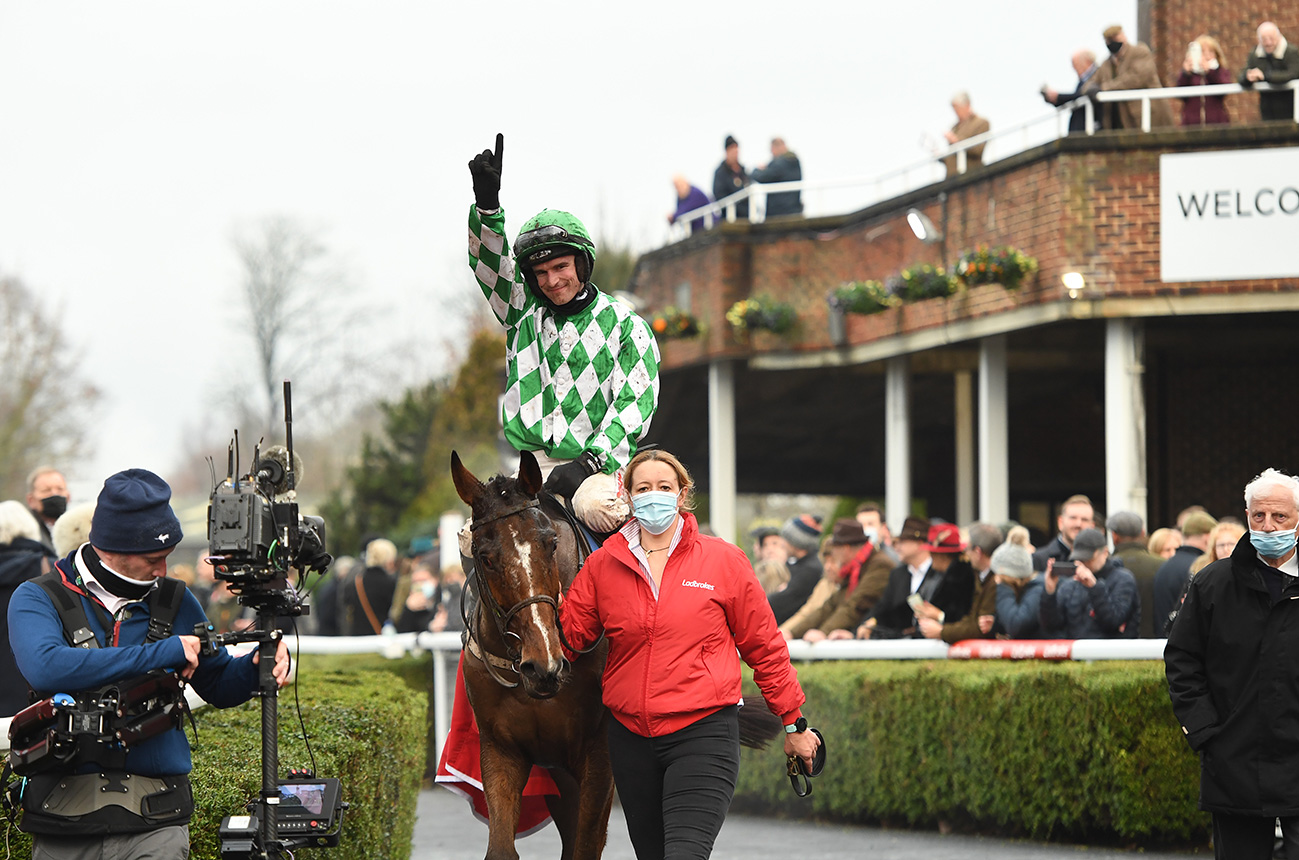 Danny Mullins punches the air as he comes back in aboard Tornado Flyer. Photo – Bill Selwyn

All roads lead back to the Champion Hurdle in March for Epatante after the mare turned in a smooth display to capture her second Christmas Hurdle.

In doing so, the daughter of No Risk At All handed trainer Nicky Henderson a record tenth success in the Grade 1 showpiece.

There was a sense that we hadn’t seen the best of Epatante following the 2019 – 20 season, which had been highlighted by victories in the Christmas and Champion Hurdles. Granted, she wasn’t disgraced when second to Silver Streak in last year’s Christmas Hurdle or when third behind Honeysuckle in the Champion Hurdle, and had regained the winning thread only last month when dead-heating with Not So Sleepy upon her return in the Fighting Fifth Hurdle. None of those performances, however, suggested that the mare was operating at her brilliant best.

Yet Sunday’s race suggested otherwise. Settled in just behind the occasionally reluctant leader Not So Sleepy, Epatante travelled with zest for Nico de Boinville, who was deputising for the injured Aidan Coleman, and after having jumped to the front three out, maintained her advantaged to ultimately win by two-and-a-quarter lengths. Glory And Fortune ran an excellent race for Tom Lacey to finish second at 28/1 while Soaring Glory was another neck away in third.

Some bookmakers reacted by trimming her to to 8/1 for the Champion Hurdle, although she is still available in some places at 14/1.

“She felt superb there on ground that might be a bit softer than it is normally,” de Boinville told ITV Racing. “I’m highly aware I’m only keeping the seat warm for Aidan Coleman [who is suspended] and I’m very lucky to come in for the ride.

Alluding to Not So Sleepy’s sporadic reluctance that resulted in a stop-start pace, he added: “It was a tactical mess but you have to make the most of these situations. I’m delighted, so onwards and upwards.” 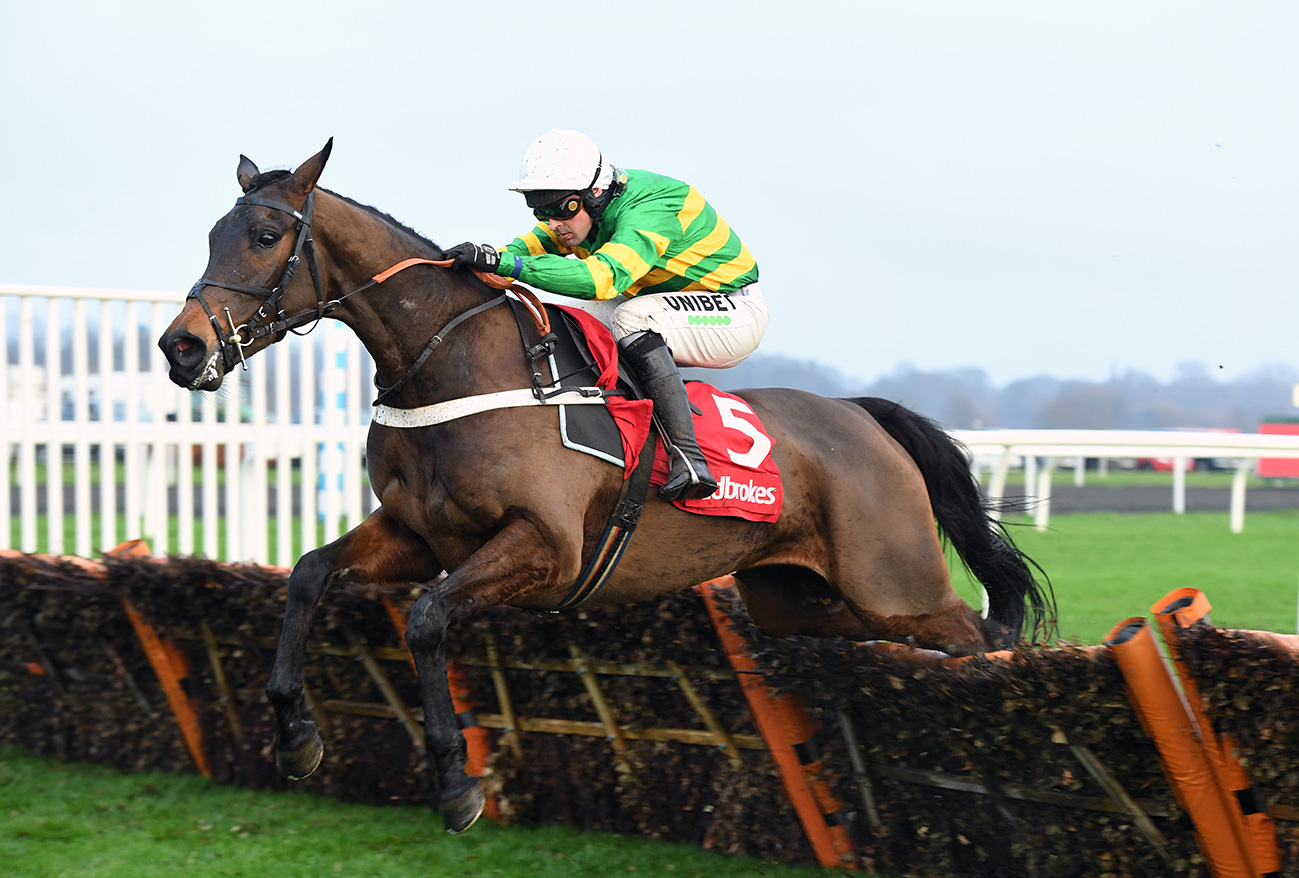 Bravesmansgame maintained his unbeaten record over fences in scintillating style for Paul Nicholls with an emphatic victory in the Grade 1 Kauto Star Novices’ Chase.

The four-runner race was billed as a clash between Bravemansgame and his Doom Bar Sefton Novices’ Hurdle conqueror Ahoy Senor, who had made an impressive chasing debut at Newbury for Lucinda Russell last month, and it didn’t disappoint with the pair dominating throughout.

Ahoy Senor was bounced out in front by Derek Fox ahead of Bravemansgame, who had been settled by Harry Cobden in his slipstream. Ahoy Senor still had the advantage as they rounded the home turn but Bravemansgame was still going well, and once pulled out by Cobden, quickened clear for a seven-and-a-half length win as the 6/5 second favourite.

It was the sixth win for Bravemansgame, whose previous Grade 1 success came in last year’s Challow Novices’ Hurdle at Newbury, and one that again justified Nicholls’ high regard for the gelding – the trainer has gone as far in the past as to compare him with Denman.

“He’s a horse we’ve always thought a lot of and we wanted to see a performance like that,” Nicholls told ITV Racing. “He’s a proper horse and he’s done the talking there for us. He’s awesome.

“He’s a better horse on slightly better ground so that was a mighty performance. He’s only going to get better as he gets older. He’s such a big horse and he was still weak last year – people laughed when I compared him with Denman but right now there’s nothing between them at the same stages of their career and he’s a mighty horse. 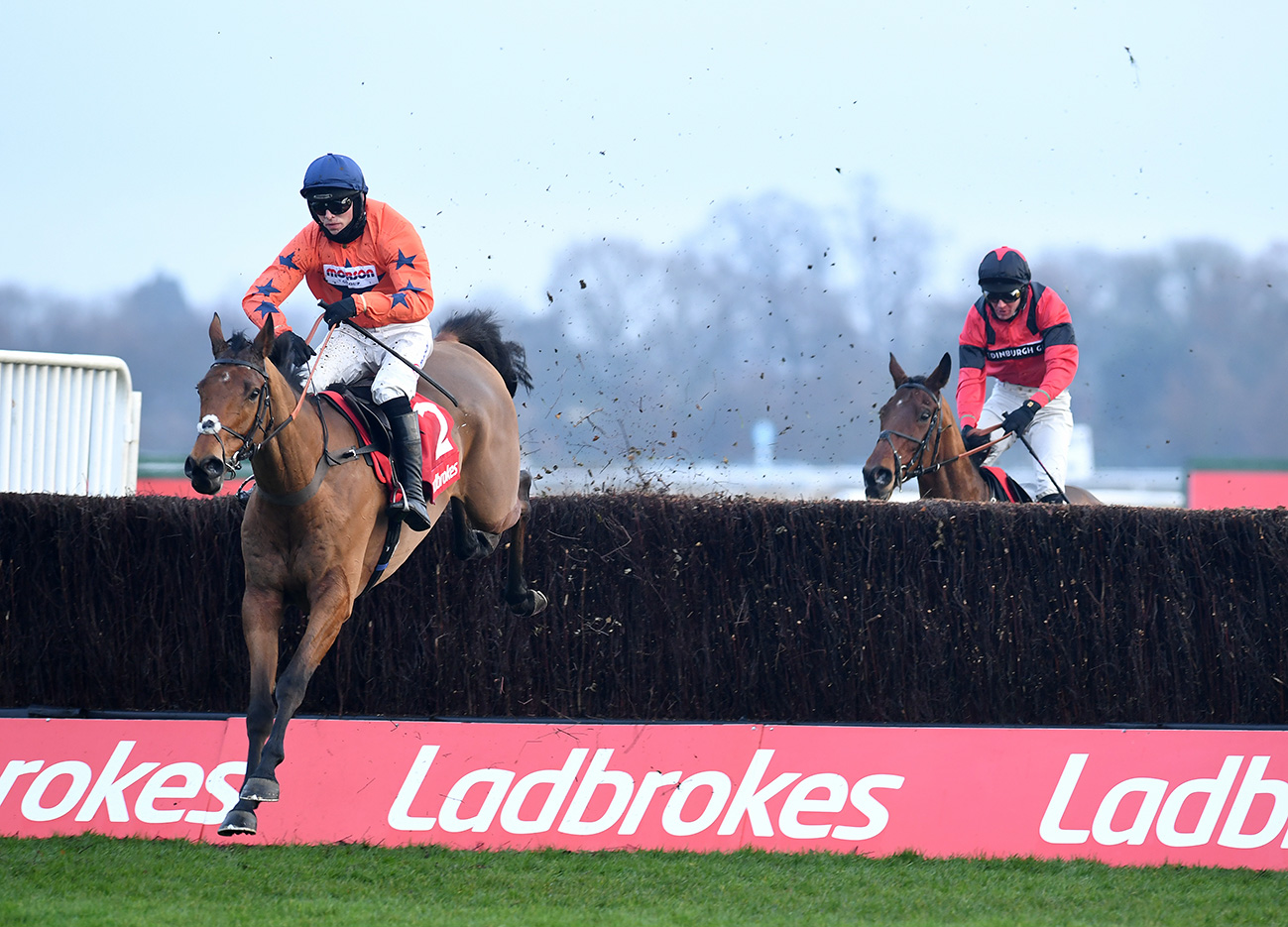 Equally impressive in Ireland, meanwhile, was Cheveley Park Stud’s Ferny Hollow, who made all to deny Riviere d’Etel and maintain his unbeaten chasing record.

Paul Townend took no prisoners on the Willie Mullins-trained gelding, allowing his free-running partner to set a strong pace from the start. In return, Ferny Hollow turned in an exceptional round of jumping and although closely attended by Riviere d’Etel throughout, he had enough in reserve to fend off that challenger and win by a length-and-a-half.

Coral reacted by shortening Ferny Hollow into 6-4 favourite for the Sporting Life Arkle Chase at Cheltenham in March. 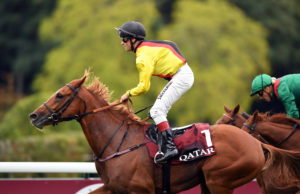 Up Next
Quality output in Germany