Owners John and Heather Snook have confirmed that their star jumper and this year’s World Hurdle winner, Thistlecrack, will be lining up in the King George VI Chase on Boxing Day.

This follows hot on the heels of the announcement that 2015 Cheltenham Gold Cup hero Coneygree will be missing the three mile contest after a poor piece of work.

Thistlecrack so far has an unblemished record of three-from-three over fences, with Tom Scudamore in the saddle on each occasion.

An easy four-length debut win at Chepstow was followed by a Cheltenham success, albeit with one or two heart-in-mouth moments. On Hennessy weekend at Newbury, he put in a faultless display in a Grade 2 novice chase when making all the running.

“It wasn’t a great surprise, obviously we had the decision between the two races, I say we but it was always going to be John and Heather’s decision,” said Scudamore.

He added: “We are not talking about an average, normal novice here, this is a horse that’s been running in Grade 1 company and carried all before him in the staying division over hurdles.

“He’s a very intelligent horse, he’s done all I’ve asked of him. He’s gone and made one mistake in jumping the best part of 50 obstacles which isn’t a bad start. It’s a Grade 1 contest in open company, one of jump racing’s classics, but we think Thistlecrack is up to it now.”

The eight-year-old gelding will be facing his stablemate Cue Card, who is coming off the back of a third Betfair Chase win.

Last year’s winner, who edged out a thriller against the recently deceased Vautour, is still on track for the £1 million bonus. The son of King’s Theatre narrowly missed out on scooping the prize in the spring, when a third from home fall in the Gold Cup put pay to his chances.

Both horses are in cracking form so should take their chance

Their trainer Colin Tizzard, who is enjoying a remarkable season, said: “We’ve been saying we’d leave a decision for as long as we could but felt it was only fair we told people what we intended to do.

“The owners want to go for the King George and I’m full backing with it. Both sets of owners have sat down and talked about it. Both horses are in cracking form so should take their chance.”

Cue Card is currently edging favouritism for the Christmas showpiece at 11/8, with Thistlecrack a shade bigger at 6/4. 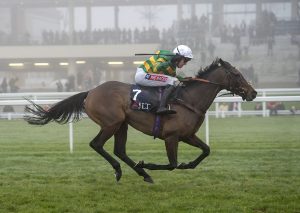 Up Next
First Long Walk for Fry