Politologue on point in Grade 2
Stories

The Harry Fry-trained Unowhatimeanharry extended his winning sequence to seven by running out a ready winner of the Grade 1 JLT Long Walk Hurdle at a foggy Ascot.

An impressive winner of the Long Distance Hurdle at Newbury on his seasonal comeback, the eight-year-old gelding was typically held up towards the rear early on under Barry Geraghty.

Ballyoptic and three-time winner of the race Reve de Sivola set off at a decent clip, stringing the 11-strong field out.

With visibility still remaining very poor, Thistlecrack’s half-brother West Approach applied pressure on Ballyoptic’s inside over three out. Unowhatimeanharry and French challenger Alex De Lerredya made good progress to get onto the heels of the leaders on the turn for home.

The long-time leader under Richard Johnson still held a narrow lead coming to the last with the favourite bearing down on his outside.

Having been purchased by JP McManus at the end of October, this performance cements the son of Sir Harry Lewis at the top of the staying hurdle division going into the new year.

His remarkable winning streak, which now stands at seven, began around this time last year in a handicap hurdle at Cheltenham. On that occasion he was rated 42lbs below what has now become his revised rating of 165.

“He had to work harder today than he had the last day,” reflected Geraghty. “Lil Rockerfeller has a good level of form and was second to Yanworth and we needed to know how good this fella is, it was a good performance.

“I’d say he only does as much as he has to, he sneaks along quietly and probably has a little bit more class than he lets on.”

We needed to know how good this fella is

Dorset-based Fry, who turns 30 this weekend, now notches a third win at Grade 1 level in a short training career so far.

Eight-year-old mare Bitofapuzzle gave him his first back in April last year, while Unowhatimeanharry’s Albert Bartlett Novice Hurdle win at the Cheltenham Festival this year was his second.

Fry said: “We were relying on the jockeys report today and he [Geraghty] said it was a proper Grade 1 test.

“He’s had to work hard and he’s come through it, so the dream goes on.” 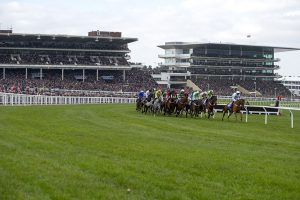 Up Next
Politologue on point in Grade 2