Tiger Roll taken out of the Randox Grand National

As expected, dual Randox Grand National hero Tiger Roll was taken out of this year’s Aintree showpiece at the latest entries stage on Tuesday, with 92 horses remaining in the extended 4m2f contest on Saturday, April 9.

His owner Michael O’Leary of Gigginstown House Stud had called Tiger Roll’s handicap rating “idiotic” and declared he would not try and emulate Red Rum as a three-time National winner.

JP McManus’s Minella Times (11st 4lb), who carried Rachael Blackmore to a historic success in the 2021 renewal, remains engaged although his handicap mark is 15lb higher this time around.

The weights for the nine handicaps at the Cheltenham Festival were also released on Tuesday. The Paul Nicholls-trained Frodon, winner of the Grade 1 Champion Chase at Down Royal in October, has been given an entry in the Grade 3 Ultima Handicap Chase (3m1f), for which he has been handed top weight of 11st 12lb.

Sky Pirate (11st 12lb) tops the weights in the Johnny Henderson Grand Annal Chase (2m), a race he won last year by a short-head, while the Willie Mullins-trained duo Burning Victory and Ganapathi and the Noel Meade-trained Daly Tiger have all been allotted 11st 10lb in the Martin Pipe Conditional Jockeys’ Handicap Hurdle (2m4f), a contest that has fallen to Irish-trained horses four times in the past five years. 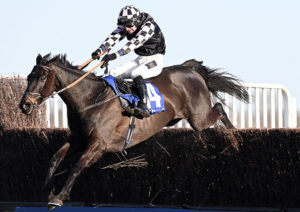 Up Next
Christian Williams bags headline races at Newcastle and Kempton