St Patrick’s Day brought three more short-priced graded winners for Willie Mullins and Ruby Walsh, Ireland’s modern-day saviours for many punters, at Cheltenham on Thursday but the bumper crowd held back its heartiest roar for a more local hero in the World Hurdle.

Thistlecrack, a 12-length winner of the Cleeve Hurdle in January, returned to the scene of that triumph with gusto as he powered up the Cheltenham hill to see off Irish raider Alpha Des Obeaux by seven lengths with a remarkable performance.

It was another appearance at racing’s top table for Dorset-based 60-year-old trainer Colin Tizzard, 24 hours before Cue Card’s Gold Cup run, and a victory equally welcomed by jockey Tom Scudamore and owners John and Heather Snook.

“Thistlecrack has been like that all season and it is lovely to get him here in the same form,” said Tizzard. “He is huge but was not always like that. John and Heather have been very patient with him and he has grown into himself the last 12 months. He has gone from a very nice horse to a superstar.”

Bred by Robin and Scarlett Knipe, Thistecrack was providing a third Grade 1 win of the week for Overbury Stud’s Kayf Tara, following Blaklion and Ballyandy on Wednesday.

Scudamore was even more liberal with his praise for the eight-year-old. “To be able to ride a horse like that was very special,” he reflected. “It was wonderful. I have never ridden anything like him. They were going fast enough in a championship race and, at the top of the hill, there were only three in it and then very quickly there was only one in it. He’s just outstanding.”

Vautour – like Thistecrack an even-money chance – led the Mullins treble when Ruby Walsh came home six lengths ahead of stablemate Valseur Lido in the Ryanair Chase.

The seven-year-old had switched late from the Cheltenham Gold Cup to the shorter race, to the dismay of some punters, and Mullins reflected that the winner’s recent homework had been less than satisfactory.

“He hasn’t been exactly delighting me in his work, and it’s amazing to see him making a performance like that. I think the drying ground has been a huge help to him, and maybe he’s a horse who was just fed up of all that winter ground,” said Mullins.

“He had a very hard race in Kempton and it took him ages and ages to get over it. We’ve been trying everything with him for the past three weeks, all sorts of things, and they’ve obviously worked.”

Mullins and Walsh hit the scoresheet in the opening JLT Novices’ Chase when Graham and Andre Wylie’s Black Hercules came out ahead of Bristol De Mai.

They teamed up again to take the first renewal of the Grade Two Trull House Stud Mares’ Novices’ Hurdle when odds-on chance Limini held off Dusky Legend. The runner-up, defying her odds of 50/1, put a great show for sponsors Richard and Lizzie Kelvin Hughes, who also bred the Midnight Legend mare.

Thistlecrack was the only British-trained winner on a banner day for Ireland with Mall Dini winning the Pertemps Network Final, Empire Of Dirt ending a frustrating run for Gigginstown House Stud when taking the Brown Advisory & Merriebelle Stable Plate, and Cause Of Causes coming out best in the Fulke Walwyn Kim Muir Handicap Chase. 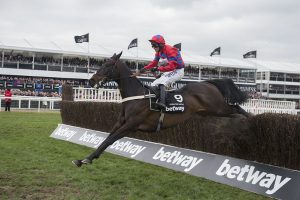 Up Next
Sprinter Sacre brings the house down