Sprinter Sacre brings the house down

Champion Chase hero back to his brilliant best with thrilling victory

Ruby Walsh, aboard 4/6 favourite Un De Sceaux, had to look on in second as Henderson’s charge – a 5/1 chance – took the Betway Queen Mother Champion Chase by three and a half lengths, recapturing a contest he previously won in 2013.

Since that earlier success, his handful of appearances had been restricted by heart problems, before his resurgence this season.

“For me that was probably my most rewarding moment in however many years I have been training,” said Henderson, cementing his position as the Cheltenham Festival’s most-successful trainer with a 55th victory at the meeting.

As with many in the crowd that rushed to Cheltenham’s winner’s enclosure, there were tears in Henderson’s eyes as he reflected on some testing moments for one of the best two-mile chasers many had seen.

“The two years in the wilderness were dark days,” he recalled. “And we thank everyone who has been part of his resurrection – because that is what it is.

“He’s been a very special horse. To have those two golden years when he was unbeaten was incredible – I always said I don’t think he’s got back there but maybe he has. He had to be as good as he was to do that today. To come back and do that after all that time was incredible,” said Henderson.

While Willie Mullins added another Grade 1 to his tally when Yorkhill took the opening Neptune Investment Management Novices’ Hurdle from hot favourite Yanworth, the afternoon was even more memorable for locally-based trainer Nigel Twiston-Davies.

He enjoyed a Grade 1 double when Blaklion took the RSA Chase and Ballyandy captured the concluding Weatherbys Champion Bumper. Both are British-bred sons of the all-conquering Kayf Tara, based at Overbury Stud just a few miles from Cheltenham.

Twiston-Davies is hoping that Blaklion, bred by trainer Hughie Morrison’s wife Mary, can continue his rise to the very top.

“I hope he makes up into a Gold Cup horse. I was inconsolable last night as I really thought The New One would win the Champion Hurdle but this has made up for it,” said Twiston-Davies.

The trainer’s son Sam was aboard Ballyandy, who was bred by Pleasure Palace Racing, a company headed by Jeremy Hinds.

“That was lovely and when your boy is riding it’s double the excitement,” added the Naunton handler. “He’s a very good horse. We got knocked so far back and I thought we were beaten but what a good horse to gallop on. He’ll go hurdling next season.”

Martin Keighley enjoyed his first Festival victory when Any Currency took the Glenfarclas Cross-Country Chase while a pair of trainers with considerably more past Cheltenham successes got off the mark for this year. 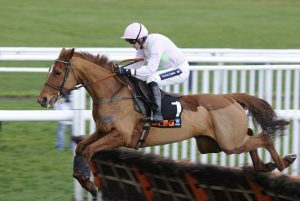