Filly by The Last Lion on top at Goffs

The first session of the Goffs Autumn Yearling Sale on Monday saw a filly by The Last Lion command a final bid of €78,000 from Rabbah Bloodstock.

Purchased as a foal for just €1,000, the filly was consigned by Clonmult Farm and is out of the winning Authorized mare Countess Ferrama. She is half-sister to the James Tate-trained Top Rank, who is unbeaten in three starts this year.

With a glittering catalogue assembled for this year’s edition of the Arqana October Sale, the first of four days of trade kicks off in Deauville today.

One of the high-profile graduates to emerge from this sale is the dual Beverley D Stakes heroine Sistercharlie, who was picked up at the 2015 edition for just €12,000 by Paul Nataf.

Coolmore America revealed the fees for its 14-strong stallion roster on Monday with Triple Crown hero Justify remaining at $150,000 for the 2020 breeding season.

Their other Triple Crown winner, American Pharoah, will have his fee announced at a later date.

There is also a Flat card at the Curragh in Ireland and jump racing at Exeter, where the Paul Nicholls-trained Southfield Stone, successful at Grade 2 level over hurdles, makes his fencing debut in the Best Mate Beginners’ Chase (2m1½f) against four rivals. 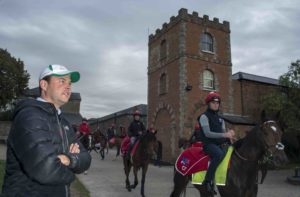