The race of the day is at Pontefract, which stages the Listed ebfstallions.com Silver Tankard Stakes, a mile contest for two-year-olds.

Six runners go to post including the Charlie Fellowes-trained King Carney, a progressive son of Australia. King Carney relished the soft ground when winning his maiden at Nottingham earlier this month and looks to hold sound claims for his owner, former BHA Chairman Paul Roy.

Fellowes, who has enjoyed his best season with 30 winners on the board so far, is hoping stable star Prince Of Arran makes the final field for the Melbourne Cup on November 5. The six-year-old gelding ran a fine prep race when touched off in the Group 2 Herbert Power Stakes at Caulfield on October 12.

Windsor races for the last time this year on what will be testing ground while there is jump racing at Plumpton and an evening all-weather fixture at Southwell.

Goffs stages the Autumn Yearling Sale today, while the action continues tomorrow with part two of the yearling sale followed by the horses-in-training session.

Night Of Thunder is enjoying a fine debut season with his runners and topped the final day of Tattersalls’ Book 3 Sale when his son out of a Dalakhani mare sold for 75,000 guineas. His single representative at the Autumn Yearling Sale is a filly out of the Raven’s Pass mare Suggest (Lot 59) and could attract plenty of interest in the ring.

Force on the move

The ten-year-old has been represented with distinction this year by his two-year-old son Golden Horde, winner of the Group 2 Richmond Stakes and placed behind unbeaten Earthlight in two Group 1s, the Prix Morny and Middle Park Stakes.

As a son of crack sire Dark Angel, Lethal Force should prove a popular recruit to Grandcamp, with his new fee set at €6,000.

The trip to San Siro in Italy paid off for the Simon Crisford-trained two-year-old Night Colours, winner of the Group 2 Premio Dormello (1m) on Sunday. The daughter of Night Of Thunder scored by a short-head from local hope Rose Secret with the Hughie Morrison-trained Romsey back in third place. 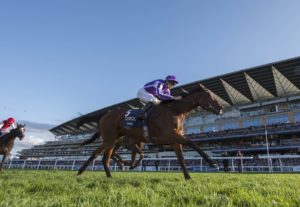