This House is on fire
Stories

Few trainers have more experience of racing’s highs and lows than Kim Bailey, who is on the up again after a quiet time

Unlike many in business life, trainers have no haven from drought or decline. Stark, merciless reminders are published daily in the statistical sections of the racing press. Yet some of the most mortifying indicators are not played out in public at all.

Kim Bailey recalls lunching with a friend in London during one of the fallow periods of his oscillating career. Two men at the next table were studying the Racing Post and deciding whether to back a horse running at Lingfield that afternoon. Oblivious to his presence, they rejected it. “We can’t back that, it’s trained by Kim Bailey,” one said scornfully.

This episode has an agreeable ending. “The horse actually won,” Bailey relates. “I said nothing until I got up to leave, then I took one of my cards from my wallet and put it down on their table. Their faces were priceless.”

A sense of humour was invaluable to Bailey as he swam reluctantly and protractedly in the shallows of National Hunt racing, prior to the renaissance that is into a third thriving season. Bailey now has a 50-box yard in a converted farm near Cheltenham, not only full but showing signs of the quality he has missed for too long. With Mat Nicholls as his estimable head lad, he seems both energised and content, a far cry from the agonies of recent years.

A decade after joining the elite band to have won the Gold Cup and Champion Hurdle at the same Cheltenham Festival, in 1995, he went through an entire season with only six winners. If he thought it could get no worse, two years later he trained only three in his first full season at his third and present base.

“By then, I had people taking me out to lunch trying to persuade me to pack up,” he reveals. “But I never even thought of it. The lowest I ever got was when having to leave Preston Capes. It had been a big move for me and it was very hard to admit it had failed.”

By then, I had people taking me out to lunch trying to persuade me to pack up

That purpose-built yard in Northamptonshire was conceived as Bailey’s escape from Lambourn, where years of serene success had given way to personal and professional turmoil. Largely, it was not through his own omissions that it failed, much more the freakish weather that washed away a new all-weather gallop and the subsequent incursions of foot and mouth that stifled any hope of revival.

“You just couldn’t believe everything that went wrong for us,” he says. “I firmly believe you should never look back and wonder what you might have done differently. You can’t change anything. All you should take out of such times is the benefit of experience. In a funny way, I enjoyed having my back against the wall. I was being challenged, to see if I could come through it.

“Back in the Lambourn days, everything tended to go to plan – you turned up at the racetrack and the horses won. Suddenly, everything in your life falls apart.

“It was a great leveller and I learned a lot from it. It made me a better and stronger person. In Lambourn, I was very aggressive.

“I attacked the job in every sense of the word. The aggression is still there but I’m a slightly more relaxed and philosophical person now.”

One human conduit for such mellowing may come as a surprise. “I’d always had a huge regard for Henry Cecil but it is much greater now. Maybe he saw in me someone who had been through similar troubles to some of his own, but he has been a great inspiration.

“There has been some correspondence between us and when I had a double at Newbury last year I got a lovely email from him. He’s a proper person.”

Bailey arrived in the Cotswolds unplanned, seeking a refuge from the disaster of his previous project, and his climb back up the training ladder has been steady and measured.

He says: “Coming here was the right thing to do but it started slowly because we had no horses of note. It was bound to take time.”

His consolation, through the gestation period, was a grounded home life with his second wife Clare, and their son Archie.

Bailey says, “Clare has been a brick. She’s transformed my life, actually. She is very strong-willed and gives me just enough rein, before pulling me in again. We tried very hard to buy the house next door to the yard but failed, so we live in a village a few miles away and it means I have another, separate life. By accident, it’s turned out perfectly.”

Bailey, a sociable character, is so much a part of local life that he has been enlisted as a restaurant reviewer for a Cotswold magazine. Such diversions do not impinge on his single-minded mission to regain faded glories. The most obvious manifestation of his progress is the imposing Harry Topper, whose thrilling victory in a Grade 2 novices’ chase at Newbury in November left the trainer visibly emotional in the winner’s enclosure.

“We’d had a bit of luck with some people sending us homebreds and he was one of them,” he recalls. “He won his bumper well and the owners were tempted into sending him to the sales with a £75,000 reserve. 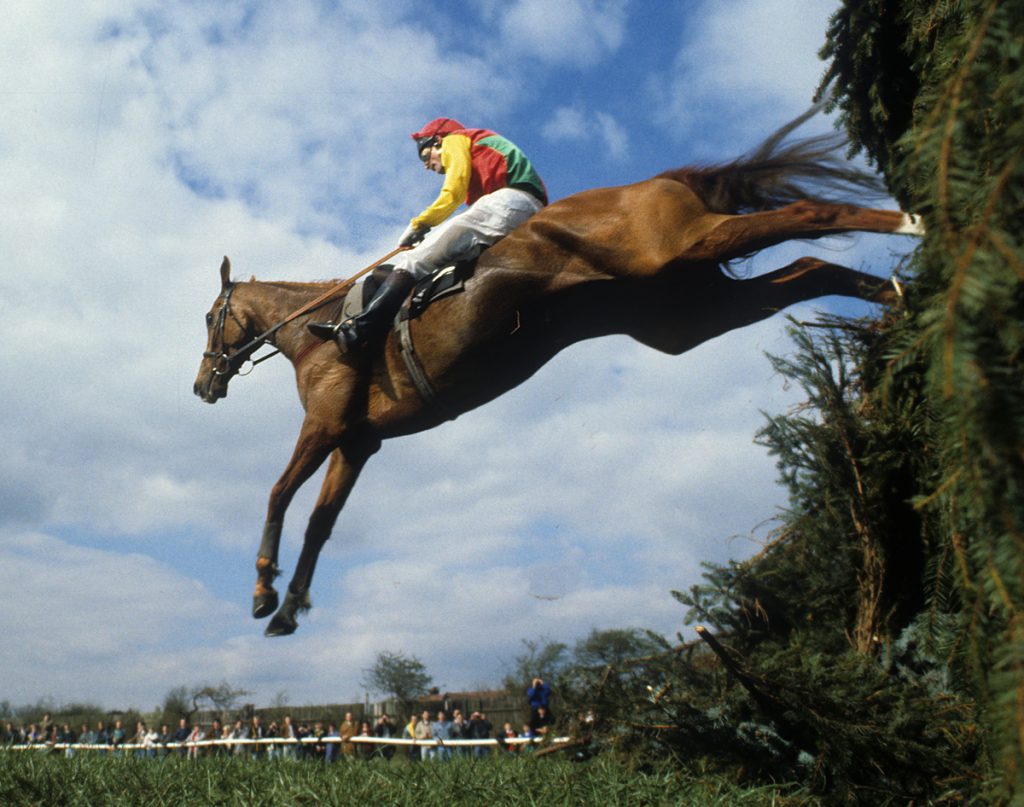 “I’d have tried to buy him back even if he’d fetched more than that, but he didn’t make his reserve. So I said I would try to find someone to have half of him and I rang Tony Solomons, who has had horses with me through thick and thin. I drove to Ascot to see him and wouldn’t leave until he’d signed the cheque.

“Tony understands the pitfalls of racing and has experienced plenty of them. He’s 82 now and I’m just so pleased he has a decent horse with me. I’ve nurtured ‘Harry’ for a long time. He’s still a frame and he would go wrong if you didn’t treasure him, but if you pointed him at a brick wall he would run through it. I haven’t had a horse like that since Master Oats.”

The successful jockey at Newbury was Timmy Murphy, another throwback for Bailey. “It was his first winner for me in 20 years,” he says. “I was in Lambourn and he was still claiming 7lb when I sacked him. We all know the problems he had with drink and it was a shame – he was a great talent, still is. Now he lives only a few miles away and I’m happy to use him again.”

Talk of Lambourn does not agitate Bailey any more. Far from it. “I take horses there every week now, the gallops are so good and I think it’s useful for the young ones to have a change in routine,” he says.

“Lambourn has wonderful facilities and, if I was starting out again, that’s where I would train. The overheads are much higher when you are on your own. The Jockey Club has put a lot into Lambourn and I’m sure the place will take off again.

“I wouldn’t go there to socialise. I have my mates who still train there, especially Oliver [Sherwood]. He and I were neighbours in Essex, when we were boys. Then we went to Radley College together and ended up training as neighbours in Lambourn. We’ve spent a lot of time together on the cricket pitch, or shooting, and it’s great that he has some decent horses back in his yard, too.”

Back in the glory days, Bailey briefly wrote columns for The Sporting Life.

“I remember writing that I couldn’t see jump racing surviving the next 20 years,” he reflects. “Now, 20 years on, it’s healthier than ever. Back when Fred Winter and Fulke Walwyn were dominating, they never had more than 60 horses apiece.

“Now there are plenty of trainers with more than 100 horses and the competition for the good ones has never been more intense. I’ve had one of my biggest orders to buy a horse but, at the last two sales, I haven’t been able to put my hand up once.”

On one issue, though, he is far from sanguine. Bailey was the youngest trainer to have a runner in the Grand National and his winner, Mr Frisk, still holds the course record for his 1990 win.

“I love the race but I really worry we’re getting to the end of its life and I think that would be incredibly sad,” he says. “We all felt raw and vulnerable after the latest National and, although the deaths were unlucky, there are more problems. The sponsor has gone and, with the BBC no longer involved, TV ratings will go down.

“How Lord Daresbury keeps his head up, as Aintree’s Chairman, I don’t know, but they are lucky to have him.

“I wouldn’t make further changes to the race but it’s important that trainers try to protect it. If we’re asked to take horses to school over Aintree fences – and be videoed doing it – then we should do so to show we have done everything possible. Animal Aid is out to get racing and we should not underestimate them.”

Cheltenham, a mecca for Bailey well before his indelible double of 1995, is embedded still deeper in his consciousness now that he lives on the doorstep. Harry Topper, he insists, is too immature to go to the Festival this season but in time he may be the horse to end a long and uncomfortable hiatus.

“I haven’t had a Festival winner for 14 years,” he says. “I still go every March, of course, and it used to be purgatory but I can handle it now. I was with Nigel Twiston-Davies last year as Wedger Pardy looked like winning the cross-country. He told me I’d won but I knew a lot could go wrong in the last two furlongs and it duly did.”

Yet Wedger Pardy, owned by the engaging Lord Leigh, is now fuelling a different dream for Bailey. “We’re looking at taking him to the Maryland Hunt Cup,” he reveals.

“He goes on rock-hard ground and no English horse has ever won it, so I’m really enthused by the idea. It’s only a £30,000 race and it will cost nearly that to get there, but the Americans love an English Lord and we’re trying to put a project together. It’s a proper ambition, something completely different.”

He adds: “It’s frightening to think I started training at 24 and will be 60 in May. But getting my bus pass won’t make me think about stopping.

“What else would I do? I have this idea of going fishing all around the world but it would take a year to do it. We’ve got too many nice horses to train for that.” 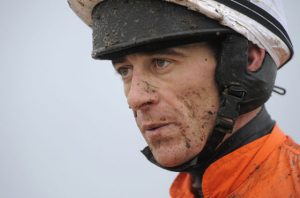 Up Next
This House is on fire