A shot in the arm
Stories

Tally-Ho Stud stole the show during the opening session of the Tattersalls Craven Breeze-Up Sale in Newmarket on Wednesday, with Tony and Anne O’Callaghan’s operation accounting for three of the top seven lots during an evening that yielded rises across-the-board.

Leading the way within Tally-Ho’s highflying draft was a homebred son of resident stallion Kodiac, who will join David Loughnane after falling to the trainer on behalf of a new syndicate, OMNI Horse, for 525,000gns. The colt is the first foal out of triple winner No Lippy, an Oasis Dream half-sister to the Prix Marcel Boussac heroine Albigna.

“He is for a new syndicate,” said Loughnane after outbidding Oliver St Lawrence. “I didn’t think that we would have to go that far for him although I knew he was not going to be cheap. Thankfully I have some owners who are willing to back him.

“The sire has done it year in and year out and he comes from a very good farm in Tally-Ho Stud.

“I loved everything about him, he is very well balanced and he did an exceptional breeze – the fastest breeze of the lot. He also has a very good pedigree – his dam was a good two-year-old for Mark Johnston.” 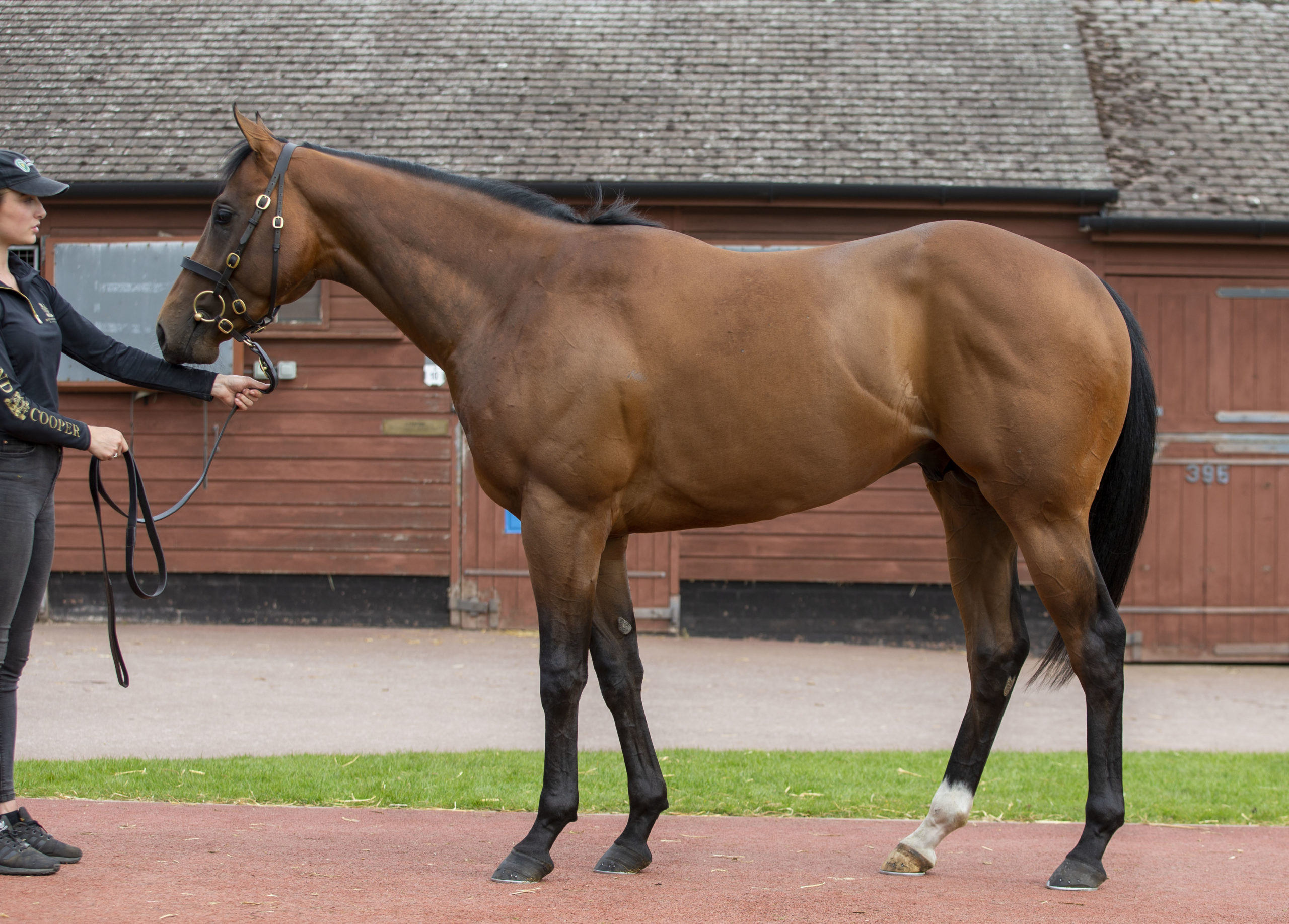 This Kodiac colt will join David Loughnane after selling for 525,000gns. Photo – Tattersalls

Richard Brown of Blandford Bloodstock signed for the Night Of Thunder colt whose dam Letterfromamerica is a winning half-sister to Grade 2 winner London Bridge.

“There’s a long history building between Blandford Bloodstock and Tally-Ho Stud,” he said. “We bought Dream Ahead, Ardad and Perfect Power off them, so it’s going back to the source of a lot of success.

“This colt did a fantastic breeze and I’m a big fan of Night Of Thunder, I think he’s set to launch to another level.”

The Mehmas filly, meanwhile, will join Richard Hannon after falling to Ross Doyle at 300,000gns. The filly boasts an excellent pedigree as a half-sister to last year’s Phoenix Stakes winner Ebro River in addition to Strong Power, who has gained black-type since the publication of the catalogue. But it was her sire who proved the most powerful attraction, and unsurprisingly so given his long association with the Doyle – Hannon partnership.

“We’re obviously huge fans of Mehmas – we bought him here as a breezer off John Cullinan and Roger Marley,” said Doyle. “And he’s a fabulous stallion who has been good to plenty of people, including Richard Hannon.

“She looked like she would do what it says on the tin, a real two-year-old with a very good pedigree. She comes from one of the best homes in the game and there is a lot of speed in the pedigree with Slade Power back in there too. There are a huge amount of positives.

“She is for an existing client, long term the plan is to breed from her if she can go as quick as she looks hopefully she can get some black-type on the way.”

It was also a good day for Norman Williamson’s Oak Tree Farm as the vendor of a War Front colt who will join Joseph Parr after selling for 425,000gns.

Ted Durcan fought off a host of interested parties for the colt, a son of the Grade 3-placed Giant’s Causeway mare Pine Needles who had been sourced by his vendors after failing to sell for $170,000 out of Book 1 at last year’s Keeneland September Sale.

“He is from a marvellous stable and a smashing-looking and moving horse,” said Durcan. “He is a beautiful stamp.

“He goes to Joseph Parr for an owner in the yard.”

Williamson has more reason than some to look fondly upon the progeny of War Front having breezed and sold one of his best sons, the Preakness Stakes War Of Will.

“They are very similar,” he said. “Similar in action, similar in attitude – this colt comes out and he’s always fresh and happy with life. Size and build-wise for a War Front, he is very like him as well. They’re both big, strong horses with a lot of scope.”

He added: “I have to give Mark McStay a mention with this colt. He knew I’d had luck with War Of Will and he said, ‘Listen there is a War Front colt out here [at Keeneland] that has not been sold’.

“So Tim Hyde Jnr went out to the farm, took videos and we were able to buy him. So without Mark we would not have got to him.

“He is a beautiful horse and his breeze was beautiful too. Let’s hope he is a racehorse.” 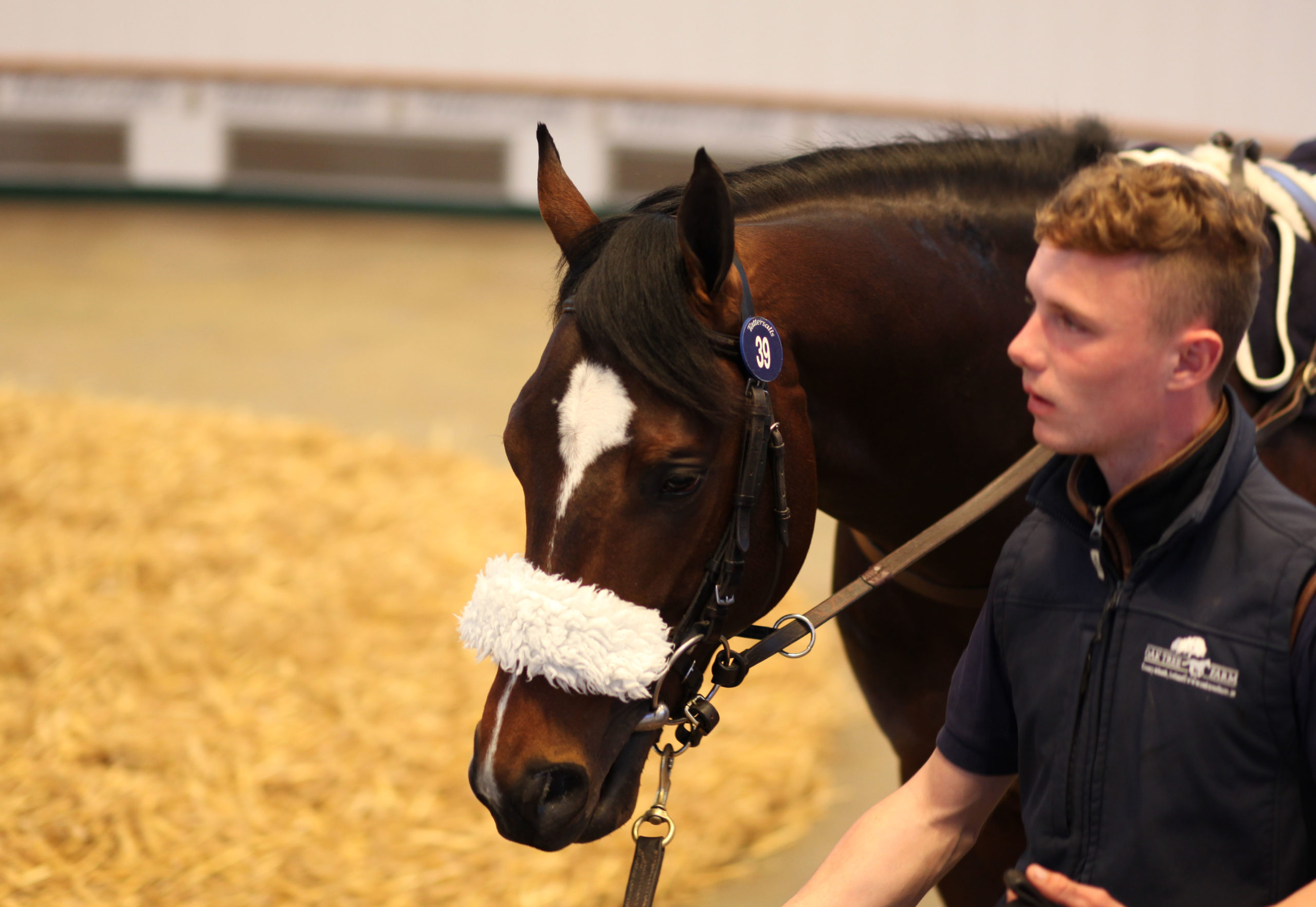 This War Front colt will be trained by Joseph Parr. Photo – Tattersalls

Anthony Stroud, meanwhile, is hopeful that lightning can strike twice after coming away with an Oasis Dream colt at 310,000gns on behalf of Godolphin.

It was at this sale last year that the Godolphin buying team came away with another by the sire who turned out to be the unbeaten champion two-year-old Native Trail.

The colt is the first foal out of the unraced Dansili mare Queimada, a half-sister to champion Querari and Grade 2 winner Quidura, and was well bought by his vendor Johnny Collins of Brown Island Stables at €58,000 out of last year’s BBAG September Yearling Sale.

“He’s a very nice horse with a good pedigree,” said Stroud after outbidding Michael O’Callaghan. “He was beautifully produced by Johnny Collins, he does an excellent job. And this horse did very sectionals – I thought it was a very good, progressive breeze.”

His sale capped an excellent day for Collins, who had earlier sold a first-crop son of Saxon Warrior for 210,000gns (Lot 2A) to Bhupat Seemar.

As with the Oasis Dream colt, the youngster turned a fine profit, having been bought by Collins for €48,000 out of last year’s Goffs Orby Sale.

Seemar also struck at 230,000gns for a Medaglia d’Oro colt from Tom Whitehead’s Powerstown Stud. The colt had been sourced by his vendor for $130,000 out of the Keeneland September Sale.

Up Next
A shot in the arm