Every cloud has a silver lining they say, and out of the bleakness of the Covid pandemic has emerged the opportunity for more prize-money to filter back into the system.

Come the end of 2020 and the British European Breeders Fund (EBF) was in possession of a small surplus of funds following the reduction of racing during the virus-ravaged season. As has been the ethos behind the EBF since it was established in 1983, that money is now going to be put to good use, with a plan in place for it to be channelled back into racing via a new and lucrative race series for the two-year-old progeny of middle-market stallions.

The British EBF 2yo Series will be run for the first time this year with a total prize fund of £200,000 split equally across two 7f finals, one for fillies at Goodwood on Tuesday, 6 September, and another for colts and geldings to be held at York on Friday, 7 October.

The initiative has won support from trainers for its inclusive nature. There are no early-closing entries and therefore no early-deadline payments to be made. Nor are there any additional entry fees.

Instead, a horse needs only to run in the first six in a restricted novice and maiden race to ensure eligibility. As over 100 such races are scheduled prior to the finals, starting at Beverley in April, there will be no shortage of opportunity for owners and trainers to qualify their horses.

“The EBF had allocated £1.68 million into prize-money in 2020,” says Rachael Gowland, marketing and communications manager of the EBF. “Obviously there was a lot of uncertainty at the time but we ended up placing £1.4 million into the system that year, which was really pleasing. 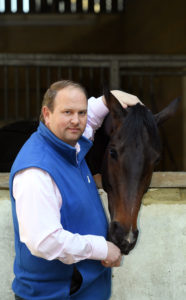 “But that meant there was a small surplus left over and we all felt that it shouldn’t be placed in our reserves – we wanted to do something constructive with it and support the industry following such a critical period.”

And so the British EBF 2yo Series was born. “The idea was to make it as inclusive as possible but we were also keen to focus it towards the progeny of middle-market stallions,” says Gowland.

When a lot of two-year-old auction and median auction races were phased out in 2021, they were replaced by restricted races. Two- year-olds qualify through an auction value at a recognised yearling sale or breeze-up sale. If not sold through the ring, they qualify through their sire’s median auction value. Horses are then organised into bands against their respective values; Band A caters for horses in the £50,001 – £80,000 bracket while Band D represents those in the £1 – £15,000 bracket.

Restricted races are framed so that horses in different bands can race against each other, and where applicable, a horse in a lower band receives a two-pound allowance against its higher-banded rivals.

Goodwood and York have backed the initiative with enthusiasm, with both pledging the full financial support requested by the British EBF in its tender process by match-funding the organisation’s £100,000 contribution.

“We all share a commitment to British racing and are pleased to have created the two new six-figure targets for juveniles,” says William Derby, York Racecourse Chief Executive and Clerk of the Course. “Modern sport is about creating development pathways for emerging talent and this innovative series seeks to further reward owners, horsemen and breeders as well as creating compelling and competitive racing.

“It is a great option for younger horses and potentially those connections who are in the early stages of their experience of our sport.”

It is hoped that the timing of the races not only gives trainers and owners a lucrative target to aim at but will also encourage them to reinvest at the yearling sales.

“The Trustees of the British EBF were keen to make sure that the surplus was re-focused to do the maximum good it could for the industry,” says Simon Sweeting, Chairman of the British EBF. “This series not only provides tantalising prize-money targets but also aims to add the EBF’s weight to encouraging owners to reinvest at the yearling sales. With no early-closing stages and over 100 chances to qualify a horse, we hope that owners and trainers will support this new initiative.”

“It is a great option for younger horses and potentially those connections who are in the early stages of their experience of our sport.”

By all accounts, those hopes are well on the way to being met with various trainers quick to signal their interest, among them Kevin Ryan.

“Such initiatives are a great reward for owners who have supported the industry through the pandemic and give great optimism for the Flat season ahead,” he says.

“We very much look forward to competing in both the series and, hopefully, both finals with our current crop of two-year-olds who are shaping up nicely for the season ahead.”

It has also attracted the attention of fellow Group 1-winning trainer David Menuisier, who trains not far from Goodwood in Pulborough.

“The British EBF has created a series that all trainers will want to have horses running in,” he said. “It is a great initiative for middle-market horses and gives them a valuable end-of-season target.”

He added: “The finals being normal closing races makes a big difference and prevents a slower-developing horse from being penalised.”

Racing has proven time and time again its ability to self help, the Great British Bonus Scheme [whereby the connections of a qualified winning British-bred filly or mare receives a bonus of up to £20,000] being one of the most recent successful examples.

Another successful initiative, the Irish EBF Ballyhane Stud Stakes at Naas, has also caught the imagination. In fact so popular is this 6f event, which is likely to be worth €300,000 in 2022 and is open to juveniles by an EBF sire whose median sales price is no more than €75,000, that consolation races have been run against both its renewals to date.

In addition, a number of auction incentives are also out there to be won, such as the £25,000 Tattersalls October Book 1 bonus.

The British EBF 2yo series is another string to that bow of self-help initiative. Accessible and inclusive, it promises to provide owners with a meaningful reward, making it a very welcome addition to racing’s landscape at a time when prize-money remains increasingly under pressure.

To qualify, two-year-olds must run in the first six places of a restricted novice or maiden race. There are over 100 qualifying races. Prize-money is paid down to eighth place.

THE VALUE OF THE EBF 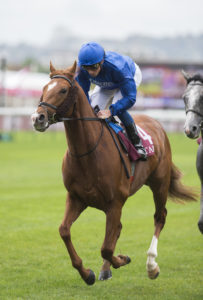 Few organisations are as acutely aware of the issue of woeful prize- money in this country than the European Breeders’ Fund, which has been at the forefront of the debate since it was formed in 1983.

The EBF was set up primarily in response to the announcement that the Levy Board would be cutting back its contribution to maiden races. At around the same time in America, the Breeders’ Cup scheme had been launched with great success. A self- help initiative that derived its income from stallion fees, it did its part to revitalise racing in the US to aid the suggestion that something along similar lines could work effectively in Europe.

The EBF operates by collecting annual contributions from stallion owners equal to the average value of that stallion’s nomination. Those with stallions who cover larger books are required to pay a greater sum – up to three times the standard contribution for those covering in excess of 121 mares.

The money is redistributed as a form of sponsorship and in return, the progeny of those participating stallions are eligible to compete in EBF-supported races; the fact that over 75 per cent of maiden and novice races in Britain today carry EBF status underlines just how crucial the organisation has become to the industry.

A horse by a non-participating stallion (most of whom are likely to be international) can be also made eligible via a contribution up to June 30 of its two-year-old year.

The first EBF-supported race was run in April 1984. Since then, it has contributed just under £40 million to prize-money in British racing.

It supports over 700 races on the Flat and 80 National Hunt races. Racecourses have to be running at minimum values to receive EBF funding.

In addition to numerous novice and maiden races, the list includes a number of high-value fillies’ handicaps, the Carrie Red Fillies’ Nursery at Doncaster’s St Leger meeting being a notable example. It has also thrown its weight behind a programme of ‘Future Stayers’ novice and maiden races, which are open to the progeny of stallions and mares who won over 1m2f or more. As with the latest two-year-old series,

Goodwood assumes a key role as the host of several of these staying races and must take pride in a roll call of recent winners that include subsequent Breeders’ Cup Juvenile Turf winner Line Of Duty and Derby runner-up Khalifa Sat.

While the majority of EBF money goes towards the Flat, a share is also spent on jump racing, including on EBF Finals Day at Sandown in March.

“The race programme is something we’re looking at all the time, whether a certain race is working or if there are other areas we can look at supporting,” says Rachael Gowland. “As far as prize-money is concerned, we’re able to measure where the money goes. That’s vitally important – if a stallion owner wants to ask us about the allocation and where it is all going, we can account for it straightaway.”

The EBF has stood the test of time. Indeed, a number of today’s participants would be unable recall a time when its sponsorship wasn’t part of racing’s fabric. That is a testament to its success, it’s quiet yet firm presence within the sport. Yet it also allows for the threat of complacency. It is worth remembering how much poorer racing would be without it. 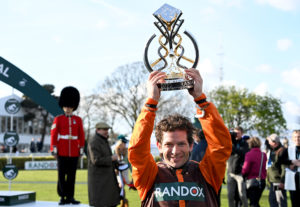