We now have a robust and informative database of facts, allowing us to make an assessment of the health of the industry, and determine the most urgent challenges facing it.

In addition to this, we are also able to confirm that the thoroughbred breeding industry contributes an estimated £281 million to the UK economy, and in particular the rural community, whilst identifying both current and potential future risks and opportunities.

Small breeders, those owning one or two mares, make up 2,500 of the 3,100 thoroughbred breeders in Britain

The report is a valuable route map for the TBA’s future direction and strategy, and on March 25 we shared the findings and results with our members, the industry and the media. It has confirmed much that the TBA already knew, but it has also identified some potentially critical areas of concern, the most pressing of which we have prioritised as crucially important areas of work.

One of the most important issues highlighted by the report is that 34% of the annual production of foals is in the hands of small breeders. Small breeders, those owning one or two mares, make up 2,500 of the 3,100 thoroughbred breeders in Great Britain. They are working to very tight margins and, in many cases, losing money on their breeding operation. There must be a significant risk that a number of these small breeders could decide to leave the industry.

Secondly, and just as importantly, the statistics show that National Hunt breeding in Britain can be described as ‘fragile’. The racing programme depends upon significant numbers of imports from Ireland and France to fulfil its daily delivery, which is an unhealthy and unsustainable strategy for any industry.

Since the results of the study have been presented to us, we have been working hard with other stakeholders in the industry to identify the best way to address these challenges. We have decided to concentrate on developing a number of practical and realistic initiatives, to be undertaken in addition to the TBA’s ongoing work in the areas of veterinary research and advice, education and training.

We will be commissioning an independent review into comparative tax regimes in Britain, France and Ireland, in order to achieve a level taxation playing field.

We will also be looking to form a Small Breeders’ Group to bring forward practical ideas to support members and breeders.
The TBA already has a number of advantageous incentive schemes for small breeders in place, but we shall be investigating further options, as well as direct financial support for National Hunt breeders. We shall also be vigorously lobbying the government to recognise what is at stake, and provide practical support for the breeding industry.

The TBA is committed to finding solutions to these concerns, not just for its members and the rural community – as important as those are – but for the 85,000 people who rely upon racing for their livelihoods.

The TBA will work with breeders, the wider racing industry and with the government in order to create a more favourable climate for the breeding industry in Britain. 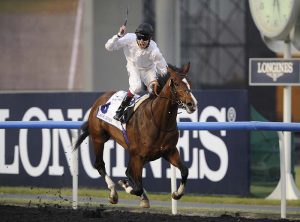 Up Next
Toast of Dubai