The 2014 Dubai World Cup meeting proved to be a truly international affair, with winners for Hong Kong, Japan, South Africa, Britain, Ireland, South Africa and the home nation, with Toast Of New York giving the training centre of Lambourn plenty to cheer about when trouncing his rivals in fine style in the UAE Derby.

A brace of Jamies – Osborne and Spencer – were responsible for the training and riding of the colt by Thewayyouare who races in the colours of Michael Buckley, for whom jump racing is his first love.

Buckley may well feel differently soon, however, as he has a genuine Classic contender on his hands with Toast Of New York, who had previously won back-to-back races at Wolverhampton but now looks likely to be supplemented for a tilt at the Derby on the first Saturday in June.

An emotional Osborne said after the biggest victory of his training career: “Seeing him win like that was pretty choking and I’m trying to fight back the tears. I’m pretty speechless, really. He does seem to be something special.”

The Joey Ramsden-trained Variety Club triumphed in the opening thoroughbred contest of the world’s richest race meeting, with Ireland also gaining a win via Michael Halford’s Certerach, who held off Cavalryman in the Dubai Gold Cup and gave Jamie Spencer the first of his two wins on the night.

A memorable evening was had by Hong Kong-based Brazilian jockey Joao Moreira, who saluted the judge in both sprint races, landing he Al Quoz Sprint aboard Amber Sky before following up with victory on Sterling City in the Dubai Golden Shaheen.

A double for Hong Kong runners was quickly emulated by Japan, with Just A Way posting easily the meeting’s most impressive performance when romping to success in the Dubai Duty Free. His victory was followed by yet another for Japan’s former Horse of the Year, Gentildonna, who overcame some trouble in running the take the Dubai Sheema Classic.

With the home stable of Godolphin winless throughout the evening, the best was saved until last for Sheikh Mohammed’s team, which took the Dubai World Cup for the seventh time with 12/1 shot African Story. The winner, trained by Saeed Bin Suroor, was chased home by Sheikh Hamdan’s Mukhadram and another Godolphin contender, Cat O’Mountain, to make the finale a truly Dubain affair. 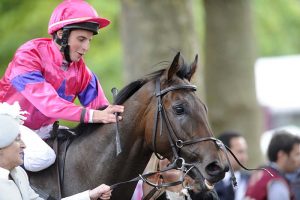 Up Next
Good Lord