Moore back for more as Legatissimo strikes
Stories

Last year the TBA published its Economic Impact Study into the breeding industry. Now we have led the way with another important document, the Study into British Stayers and Staying Races, which has even wider implications for the sport in Britain.

Britain’s programme for stayers – those horses racing at the Classic distance of a mile and a half and beyond – is the best in the world. No other country provides such a balanced series of races in this category and some, such as the US, appear to have given up the ghost altogether.

That said, though, there are signs that the British programme is in decline, and if that trend continues, there will be no going back. A significant element of the sport’s variety will be lost for good, with serious ramifications for all concerned, from owners and trainers to racecourses and fans. Nowhere would the consequences be felt more keenly than in the breeding industry, for as the ultimate providers of the racing product, breeders figure at the beginning and the end of the debate.

We will be producing, watching and betting on horses whose careers consist of a whole series of six- and seven-furlong handicaps

The Study into British Stayers and Staying Races, launched in mid-April, will appeal to anyone with an interest in maintaining the quality and variety of racing in Britain, and that extends to National Hunt racing, which depends on an appropriate supply of staying-bred mares and sires. Changing trends in breeding naturally takes time, but there are two main areas where the findings can be taken forward immediately. They both involve race programming, firstly for two- and then three-year-olds.

There has to be more incentive for would-be purchasers of foals and yearlings who are likely to be seriously raced in the second half of their two-year-old seasons, rather than the first. That means providing suitable races with conditions that specifically stipulate they are for the
produce of stallions who have won at a minimum of ten furlongs. It happens in a few cases at the moment, but they seem to be quirky exceptions that have been buried deep in the programme book and as such provide very little general encouragement either to breeders or buyers.

Yes, they would be restricted races in an age when we are trying to be as open as possible, but we have let things run their course and occasionally you have to step in and adjust the path down which we are travelling.

If setting race conditions that promote staying horses is going to benefit the breed, as well as racegoers, that’s what we should do. Otherwise we will be producing, watching and betting on horses whose careers consist of a whole series of six- and seven-furlong handicaps. I can’t think of anything worse.

As for the programme for decent staying three-year-olds, you suddenly come to the Queen’s Vase at Royal Ascot, with no build-up and no serious follow-up other than races that are regarded as trials for the St Leger and the autumn.

The Queen’s Vase should probably be rewritten and put on the British Champions Day card, instead of the all-aged Marathon, but that’s maybe too revolutionary an idea to find favour. Nevertheless, we want to see a properly defined programme for staying-type three-year-olds. Their peak is not the Derby but the St Leger, which has held up in recent years thanks in a large degree to support from Coolmore and Godolphin. But where are the other major races?

And what happens to the British-bred horses who might have run in them? They’ve either been exported, such as last year’s Queen’s Vase winner Hartnell, who took advantage of a lucrative opportunity by winning a Group 1 over a mile and a half in Sydney at the end of March, or sold, like Grand Marshal, who raced in England as Magog and followed suit in the two-mile Sydney Cup in early-April, or they are not being bred in the first place.

Although we will always remain a trading nation, a further worsening of either situation would be dangerous for British breeding. We must not allow the Australian experience, where speed dominates and their owners have to come to Europe to buy staying horses, to happen here. 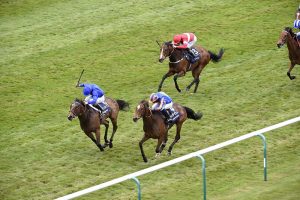 Up Next
Moore back for more as Legatissimo strikes