Moore off the mark in first Classic
Stories

Moore back for more as Legatissimo strikes

Twenty-four hours after Ryan Moore landed his debut success in the 2,000 Guineas on Gleneagles, he was back to secure his second victory in the first fillies’ Classic of the season when Legatissimo outpointed Lucida in the 1,000 Guineas.

Emulating the previous day, it was a Coolmore horse landing the spoils with a Godolphin challenger in second and runners for Richard Hannon and Mick Channon landing the monor placings. The winner and runner-up in the two Classics were each trained by different men, however, with Aidan O’Brien scoring with Gleneagles while John Magnier’s son-in-law David Wachman enjoyed success with Legatissimo. Godolphin relied on Andre Fabre and Jim Bolger to bring Territories and Lucida from France and Ireland.

Like Gleneagles, Legatissimo hails from a family which has already tasted Classic glory. A daughter of Danehill Dancer, she was bred by Newsells Park Stud from the Montjeu mare Yummy Mummy, a full-sister to Irish Derby winner Fame And Glory. Her slightly unconventional Guineas prep saw her win a Listed race at Gowran Park just a week before she claimed Classic honours.

“I started to get excited about her over the winter, we went to Leopardstown on very soft ground and she didn’t perform so we were scratching our heads a bit but she won well at Gowran, it was like a bit of work, and we decided to take our chance here even though it was only a week later.

Michael Tabor, who owns the filly with Derrick Smith and Sue Magnier, and in whose colours she runs, added: “It’s hard to believe, the first two Classics of the year, it’s what you dream about. Ryan said yesterday that he has never done the double and I joked that maybe this year it will happen, never really thinking it would.

“If David [Wachman] has got the right animal then he will produce it, it’s as simple as that. He produced her in brilliant shape despite her running a week ago and she has done everything we hoped she would.” 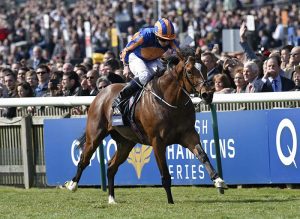 Up Next
Moore off the mark in first Classic