It was not the Tattersalls February Sale as we know it, with interest directed through the means of technology behind closed doors rather than within the atmospheric event of a live sale ring. But as we have seen throughout the past year, the bloodstock industry boasts a remarkable resilience and following a stuttering start, some of the better lots did indeed go on to spark a spirited virtual trade on Thursday that was enough even to push the median forward from its previous mark.

This isn’t a sale of heady levels, with few vendors unlikely to have come out on the right end of an average of 9,861gns, itself a 22% drop from the corresponding day last year. However, a clearance rate of 71% underlined the fact that a healthy proportion of those on offer were moved on while a median of 5,750gns actually represented an increase of 15% from 2020.

As is invariably the case at these mixed events, the sale kicked into life as attention turned to the Godolphin consignment.

The draft went on to turn over 390,000gns for 18 sold and included four of the top six lots, led by the session-topper Beautiful Illusion. The four-year-old wound up at the day’s sole six-figure transaction on a valuation of 120,000gns from Mark McStay of Avenue Bloodstock.

Beautiful Illusion boasts a commercial pedigree as a daughter of Shamardal, whose reputation as an elite broodmare sire continues to grow, and the Sweet Solera Stakes heroine Long Lashes. She was also a talented race filly for Charlie Appleby who made a good impression when winning her first two starts early last year.

“She is the daughter of a very good racemare, whom I remember from my time at Godolphin, and she is by a world-class sire in Shamardal,” said McStay, who was acting on behalf of an undisclosed client. “She had ability herself and achieved a good rating of 89.

“I saw her ten days ago at Moulton Paddocks, Godolphin kindly facilitated a visit. She is a good-walking filly, and she was a stand-out today on paper and physically.”

New top lot at the live virtual #TattsFebruary Sale as Beautiful Illusion, a winning daughter of Shamardal consigned by @godolphin, is bought by @AvenueBstock for 120,000gns. pic.twitter.com/9IiMGGIBsc

The Godolphin draft was also the source of the second most expensive lot of the day in Symbol Of Love. Yet another daughter of Shamardal, she is set for a visit to Kodiac after falling to Tony O’Callaghan of Tally-Ho Stud for 65,000gns. The cross is already responsible for top sprinter Hello Youmzain.

“She is for Kodiac – she is by Shamardal and they go well together,” said O’Callaghan. “She has a good page and she looks a nice filly.”

He added: “Bidding was easy online, but that was the only bid we had.”

The placed Symbol Of Love is a half-sister to Listed winner Firebird Song and boasts an interesting background that consists of inbreeding to Shamardal’s granddam Helen Street; the same pattern is seen in the backgrounds of Group 1 performers Victor Ludorum and Lucida.

Outside of the Godolphin draft, proceedings were led by the sale of Swiss Kiss to Canice Farrell of Knockatrina Stud, signing as Pegasus, for 48,000gns. Consigned by New England Stud on behalf of Lordship Stud, the winning Dansili mare is a daughter of Lordship’s famed producer Swiss Lake and therefore a half-sister to the accomplished speedsters Swiss Spirit, Swiss Diva and Swiss Dream. Both her first two foals are winners and she was sold carrying a fast covering to Acclamation, the sire of her second winning foal Continental.

“I’m chuffed!” said Farrell. “It is a good pedigree, she is a good walking mare, she has a commercial cover and the only negative is that she is a bit late [May 22]. I hope to send her to either Invincible Spirit or Kodiac.

“I was bidding by phone to Shirley [Anderson-Jolag] of Tattersalls and she told me to go one more to 48,000gns, so I have her to thank! I just have to get the mare home now – I have a bunch of trucks [Farrell also has an equine transport business] in the yard doing nothing!”

The smattering of foals on offer proved to be a fruitful hunting ground for owner Julie Wood. Bidding under her Woodstock banner, Wood came away with three youngsters worth 71,000gns, all from Hazelwood Bloodstock.

They included the day’s dearest foal, a first-crop son of Cracksman out of the South African Group 2 winner Tamanee for whom Wood paid 26,000gns. Wood also went to 25,000gns for a Golden Horn filly out of Listed scorer Lady Heidi.

“I have been thinking about this all week and it was strange this morning sitting at home getting nervous before bidding!” said Wood. “But you look into the screen and it feels just like you are in the ring. It is exciting now I have bought them, we can make plans!

“They have all been bought to race. They will go to Charlock Stud now and then into training with Richard Hannon.” 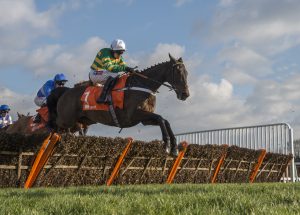 Up Next
Cleeve Hurdle and Cotswold Chase rescheduled for Saturday