Safeenah continues to be the gift that keeps giving for Con Marnane. The master trader paid just €7,500 for the Oasis Dream mare, a relation to Muhaarar, as an unraced two-year-old at the 2018 Tattersalls Ireland December Flat Sale, since when stock out of the mare have realised a total of 250,000gns.

Her first foal, a colt by Invincible Spirit, commanded 150,000gns from Shadwell as a foal last year and is set to be retained by the operation. Today, the mare was to the fore again, this time as the dam of a colt by Soldier’s Call who realised 100,000gns to Joe Foley.

Foley stands the sire at his Ballyhane Stud in County Carlow and must be pleased so far with the reaction to his first crop, which are so far averaging 20,769gns for 26 foals sold.

“She’s a queen of a mare,” said Marnane following the sale. “The first foal was very good and this was a belter of a colt. I told Joe Foley two minutes after he was born that he was special, and I’m pleased Joe thought he was special today too.

“The sire is just getting gorgeous stock. I’m very pleased for Joe. He’s got two stallions there that I had [as breezers] in Prince Of Lir and Sands Of Mali – he’s a gentleman to deal with.”

Soldier’s Call was a precocious two-year-old, showing a great constitution to sweep the Windsor Castle Stakes, Prix d’Arenberg and Flying Childers Stakes before running only a neck short of the older Mabs Cross in the Prix de l’Abbaye.

Nor was he just a two-year-old, as his performances at three included placings to Battaash in the Nunthorpe Stakes and King’s Stand Stakes. The son of Showcasing cover 164 mares in his first season. 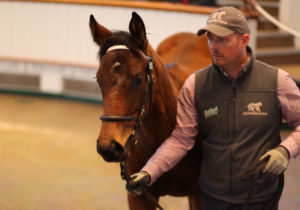 Up Next
Petches star at Tattersalls