Victory in the QIPCO 1,000 Guineas makes up for Toronado disappointment

Sky Lantern gave Richard Hughes a longed-for British Classic victory when landing the 200th running of the 1,000 Guineas at Newmarket.

Twenty-four hours after Richard Hannon’s stable had suffered the disappointment of the strongly-fancied Toronado finish a rapidly-weakening fourth to Dawn Approach in the 2,000 Guineas there were smiles back on the faces of brothers-in-law Richard Hannon Jr and Richard Hughes as the stable celebrated its fourth British Classic win.

Sky Lantern, a grey daughter of the late Red Clubs, had been beaten by the Sir Henry Cecil-trained Hot Snap in the Lanwades Stud Nell Gwyn Stakes, a victory which saw the Juddmonte homebred start favourite for the fillies’ Classic. She struggled to repeat that performance, however, leaving Sky Lantern to tussle with Qatar Bloodstock’s Just The Judge, who eventually finished half a length behind her in second, while Moth took third for Ballydoyle.

“I just went out there today feeling happy-go-lucky and it worked. It’s a super day,” said a visibly relieved Hughes, the reigning champion jockey.

“Things didn’t go right the last day I rode her – and I should have won on her in America [in the Breeders’ Cup Juvenile Fillies’ Turf]. But I always believed in this filly and she came good.

“She is a very good filly and loves that ground. She was tough there and stuck her head out on the line. They didn’t go over fast but it was about getting her plenty of cover. They just got away from us in The Dip but you have to come through horses on this filly.”

Richard Hannon Jr, assistant to his father who was overseeing the stable’s runners at Salisbury, added: “I am delighted for ‘Hughesie’ – he deserves it. It is great for him and we are just delighted that he is one of ours.”

Regarding Sky Lantern’s future, he said: “We will look at the Irish 1,000 Guineas for her and there is the Coronation too. She will go further but a mile and a quarter is probably as far as she wants to go.

“We were very low after yesterday. We think Toronado is a very, very good horse and hasn’t run his race for some reason, which hasn’t come to light yet. He travelled very well. Arguably he travelled with the revs pretty high through the race and after that he didn’t finish his race. Hughesie said after another 50 yards he would have been near-enough last. We have to find a reason why that is and I would say we are now looking at Royal Ascot.”

Amy Starkey, Regional Director (East) of Jockey Club Racecourses, was delighted with the improved crowd figures for the QIPCO Guineas meeting, which heralded the start of the QIPCO British Champions’ Series for 2013. For both days, attendances rose by 9% to 31,455.

Starkey said: “We are absolutely delighted with the attendances over both days. It has been a great team effort and the improvement on last year’s crowd figures is in no small part down to the hard work and determination of everybody associated with Newmarket Racecourses.” 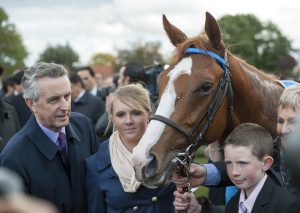 Up Next
Dawn Approach remains unbeaten