By The Owner Breeder staff 08 September 2016

Twelve months on from her St Leger victory – which was controversially taken away from her before being given back on appeal – Simple Verse was back competing over the same course and distance in a competitive renewal of the DFS Park Hill Stakes for fillies and mares.

In what was a thrilling conclusion to the one mile and six furlong contest, Ralph Beckett’s star filly wrestled the Group 2 prize giving her a belated first success of the season.

At an honest pace the 12-strong field were taken along by Mill Springs and Ballydoyle’s Pretty Perfect into a fierce headwind. The Sir Michael Stoute-trained favourite Abingdon and California were held up just off the leaders while Simple Verse was waited with in midfield under Oisin Murphy.

As the pack raced towards the three furlong pole, Pretty Perfect was taken to the front by Seamie Heffernan and kicked a good four lengths clear of the field entering the final two furlongs.

Simple Verse made steady headway on the far side and although running into trouble two furlongs, was extricated by Murphy and came with a strong challenge to collar the leader by a neck at the post.

For Murphy who has just turned 21 this success continues the Killarney-born rider’s rich vein of form in recent weeks. In just the last three weeks he has ridden no fewer than seven winners at Group 2 and Group 3 level.

“Sometimes when they race up the rail they just fall back into your lap and I had to be patient and bide my time and I had a very willing partner,” said Murphy. “Down at the start I knew they had her back she was different to all year.”

Lambourn-based Beckett struggled to get Simple Verse back on song in the lead up to the race after three disappointing runs over 1m 4f. En route to his best season on record, the handler enjoys his finest win of the calendar year.

Beckett said: “It didn’t look good at the half furlong pole but this is her optimum and possibly even two miles I’d be keen to go with next time.”

“She did a lovely piece of work on Sunday morning on the grass and showed all her old zip. I’m thrilled to have her back because the other two good fillies I’ve had, Talent and Look Here, never won at four.”

The duo notched a double on the card courtesy of two-year-old filly Rich Legacy who battled on willingly in the Group 2 May Hill Stakes over a mile.

The daughter of Holy Roman Emperor also sporting the silks of Qatar Racing tracked the Mark Johnston-trained Kilmah in the early stages.

She took the lead under Murphy two furlongs out and although headed by Godolphin’s Grecian Light inside the final furlong, she battled back to regain the lead in the closing stages to win by just under a length.

Pat Cosgrave was to punch the air in jubilation after he passed the line in front aboard Mubtasim in the Weatherbys Hamilton £300,000 2-Y-O Stakes.

The William Haggas-trained two-year-old colt was last seen finishing a disappointing eighth in the Group 2 Gimcrack Stakes on the Knavesmire. Held up towards the rear in the early stages, Cosgrave brought the son of Arcano with a withering run towards the stand side, securing a comfortable length and a quarter victory from runner-up Mazyoun. 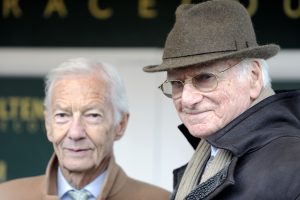 Up Next
Centre named after Sir Peter O'Sullevan