Sea Of Class dies after illness

The Tsui family are mourning the loss of their two-time Group 1 heroine Sea Of Class after the filly lost her battle with colic.

Sea Of Class’ career had been ended by the illness last month but on Monday, news came from her trainer William Haggas that the daughter of Sea The Stars had had to be put down because of her deteriorating condition.

Speaking to the Racing Post, Haggas said: “The reason for colic surgery on Sea Of Class in the first place was to remove an abdominal mass sitting between the spleen and liver which had intertwined with her gut. That gut was removed and some of the gut taken out.

“However, the mass turned out to be a malignant tumour known as aa lymphoma. Her surgeon Richard Payne and specialist Ceila Marr warned us that lymphoma’s can be aggressive and so it proved.

“Having made sure and steady progress under the excellent veterinary team at Rossdales, she took a turn for the worse at 4:30am this morning and a subsequent scan revealed another tumour the size of an orange. Despite regular scans during her convalescence, this was the first of an abnormality.

“She was quiet and uncomfortable today – and quite weak and the decision to put her to sleep was then taken unanimously by her team of experts, Maureen and I.

“Owner Mrs Tsui has been in full support of all decisions taken and she, her family and advisors are all devastated. For all of us here, we mourn the loss of the best filly we had anything to do with but will cherish the memories forever.”

Unraced as a two-year-old, Sea Of Class hit the racetrack as a three-year-old notching a quartet of victories between May and August which included successes in the Irish Oaks and the Yorkshire Oaks.

Her final start at three came in the Prix de l’Arc de Triomphe where she overcame a wide draw to go down by a short-neck to Khalid Abdullah’s outstanding mare Enable. Sea Of Class only ran once this year in the Group 1 Prince Of Wales’ Stakes won by Crystal Ocean.

Razza Del Velino bred Sea Of Class out of the Listed-winning Hernando mare Holy Moon, who has also produced the Italian Oaks scorers Charity Line, Cherry Collect and Final Score. It was at the Tattersalls December Yearling Sale in 2016 that Sea Of Class was knocked down to McKeever Bloodstock at 170,000gns. 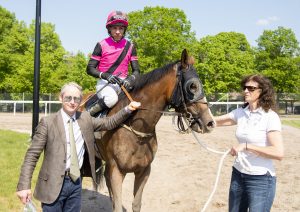 Up Next
Fresh start for ex-British-based duo