When the Elzaam gelding Ching Ching Lor crossed the line in front at Bro Park racecourse near Stockholm on May 22, it meant that two expatriate Brits were up and running as they begun to make a fresh start in foreign pastures.

This was a first winner for Paul Fitzsimons since he took over the Swedish training licence from former Oxfordshire handler Hans Adielsson during the winter, and just a fifth (from only 22 rides) for Dale Swift since he returned to the saddle in Scandinavia at the turn of the year, having been forced into early retirement by weight problems in 2015.

Between them, Fitzsimons and Swift rode almost 400 winners on these shores, though their careers only briefly overlapped. Seven years the senior of the pair and now aged 40, Fitzsimons was just giving up when Swift had his breakthrough season in 2010.

Indeed, although his accent suggests otherwise, Fitzsimons is Irish rather than British – he ventured over from the Emerald Isle at the age of 17 to become an apprentice with Reg Akehurst. He stayed until 2017, when he packed his bags to get married to his Swedish-born partner Helene, and move into their newly-acquired nine-acre property in Skurup, half an hour’s drive from Jagersro racecourse in Malmo.

After hanging up his riding boots, Fitzsimons had a five-year stint as a trainer based at Saxon Gate Stables in Lambourn and went through the trauma of standing helplessly by as his long-term girlfriend, Julia Tooth (daughter of successful owner Raymond Tooth), fought an ultimately losing battle against cancer.

Though he managed a perfectly respectable seven wins from 64 runners in 2014, his first incarnation as a trainer never really got off the ground and he called it quits a year later, unable to make ends meet.

He met Helene, who was riding out while qualifying to become a chiropractor, six months after Julia’s death and, in Fitzsimons’s own words, “she was a great friend and confidante, jollying me along” during his period of grief.

The couple have recently celebrated the birth of their first child Flora (who has touchingly been given the middle name Julia) and Fitzsimons envisages her growing up in Sweden.

“As much as I love the UK, I’m looking forward to re-inventing myself in a new country,” he says. “Sweden is a bit like the UK twenty years ago.

“I hadn’t necessarily planned to train again but I really enjoy it. Hans [Adielsson] approached me in a roundabout way, saying he was going to retire.

“His owners are great and I’ve inherited some nice horses, so it was more a matter of him offering me an open door and I simply had to walk through it.”

Fitzsimons continues: “The racing is a bit different and it’s taken me some time to get my head around it. We race largely on dirt, the pace is relentless, and your horses have to be really fit otherwise they’ll get found out, so I’ve had to adapt my style.

“Logistically it’s much easier than Britain, because you train and run at the racecourse, so you’re not sending two different horseboxes to opposite corners of the country on the same day. It’s competitive but the training fees are little more than half of what I used to charge in Lambourn and you can actually make money – if a horse is decent enough it can make back its price tag inside the first year.

“I did race-ride again for a few months last year but I don’t think that you can train and ride at the same time. I still ride most days and will sometimes partner a horse in its final piece of work, but I try to stay on the ground as much as possible and speak to my owners.

“I do miss the simplicity of riding. As a jockey you can just get off, explain your bit and walk away, whereas a trainer has to be thinking all the time, trying to get inside a horse’s head – it’s like a game of chess and there are so many parts to the jigsaw.”

“It’s much easier than Britain, because you train and run at the racecourse”

As for his link-up with Swift, Fitzsimons admits that they were only ever on nodding terms back in Britain, but when he heard from another expat jockey, Alan Wallace, that Swift was making a comeback in Scandinavia, he remembered what a strong jockey he had always been, an attribute that he feels is particularly important in dirt racing.

Swift agrees that dirt puts an onus on strength and fitness, for both horse and rider alike.

“They go so fast early on in dirt races out here, sometimes it’s not really race-riding, they just go flat out and the horse that stays the best wins,” says the Rochdale-born pilot.

“You need to try get a little bit extra out of them in the last 200 metres when they are really tired and there are restrictions on your use of the whip – you can only hit them three times in Sweden and not at all in Norway.

“On my first week back riding here, I tried to drop one out but I simply got myself completely out of the race – you need to be close to the pace.”

Best known in Britain for his association with the flashy chestnut Top Notch Tonto, on whom he won a Group 3 and finished second in the 2013 renewal of the Queen Elizabeth II Stakes, Swift’s riding career seemed to have come to a premature end when he developed mental health problems as a result of his long term battle with the scales.

He served one six-month BHA ban having tested positive for a prohibited substance in 2015 then announced his retirement when a second drug ban, for a metabolite of cocaine, was confirmed in April 2017.

“I’ve been living in Oslo since July last year and I’ve got the buzz for riding back now,” Swift revealed. “Things went wrong for me when I lost my claim and at one point my weight shot up to 9st 11lb, I was having to lose eight or nine pounds in a few hours, I was flipping [inducing himself to vomit] and it fried my head.

“I wasn’t dedicated enough back then, I didn’t train hard enough. Now I ride out at least six lots a day and can eat properly and ride at 9st. I will go for a jog in a sweat suit but it’s very rare that I go in the sauna.

“I’m riding as second jockey to [13-time Norwegian champion trainer] Wido Neuroth. The lifestyle’s a lot better out here, there’s a lot of nice people, there’s not so much travelling, and I’d like to stay.” 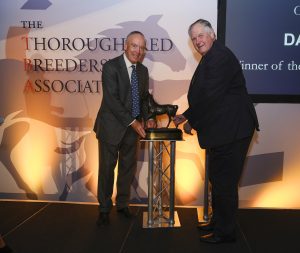 Up Next
British success celebrated at TBA Awards