Sam Thomas: moving to Wales has been the making of me

“This has been a life-saver,” says Sam Thomas, reflecting on the position he holds as trainer at Dai Walters’ yard, just off the M4 near Cardiff.

The former jump jockey does not mean the comment literally, but his second career now has structure and purpose and is on an upward trajectory. Next summer he marries Tori Cannon – the couple share a love of horses although she works in fashion – and some of the more turbulent times in his life are now little more than distant ripples.

Now he is responsible for a stable of classy young horses, with pedigrees to back up their promise, and is paid a salary by leading racehorse owner Walters to train for him and bring on young stock he has either bred or bought as yearlings. “One of my passions is working with young horses,” explains Thomas, who also trains for a few friends and former clients from the time he rented a yard in Lambourn.

While in Lambourn he trained 11 winners in three seasons until a phone call soon after the start of the 2018/19 season changed his direction. He says: “I was [in Lambourn] literally looking at the books, the horses we had in training, the training fees and so on, and thinking, ‘We’re not making much money’, when Mr Walters rang and offered me the job. It’s a salaried position, a bit like a sponsor, and it means I have one focus, which is to train winners.

“Part of the deal was that I was able to bring some horses for owners who have supported me from the beginning of my training career.” 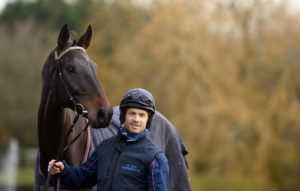 One such ‘outsider’ is Diamond Racing’s Iwilldoit, winner of the Welsh Grand National in handsome style at the end of December, and whose place in the yard links back to Thomas’s childhood in the Welsh village of Grosmont in Monmouthshire.

He continues: “Diamond Racing, which is run by Christian Morgan, lease Iwilldoit from Stan Brown, whose father Reg gave me my first winner. Stan and his wife Mary live only a mile from my parents and have been friends with them for a long time – Reg bred Iwilldoit and I won on the dam, so it’s proving to be an enduring story.”

Breakthrough season
It took a while for success to start rolling after Thomas moved to Walters’ Lisvane yard, with just ten winners in the first two seasons, albeit Covid pinched a couple of months of racing. However, last season’s statistics put his training skills in a different light, showing 26 winners at a strike-rate of 28 per cent, and his horses have continued to make a mark this season. He seems sure to overhaul last season’s personal best prize-money total before the New Year.

He says: “It takes a while to familiarise yourself with the facilities when you move yards. My first season here was a massive learning curve – we had to set up a routine that suited the horses. Since then, Mr Walters has invested heavily in the yard, putting in a wonderful new, well-ventilated barn and a round sand gallop, which is making a huge difference.

“We have a relatively short gallop and when we started we were going up there three times on work days, which may have been doing too much. As a jockey in a race knows, one sure way of getting a horse beaten is to go too fast and take them out of their comfort zone. Now the round sand gallop gets them warmed up without having to do too much and we go up the main gallop just twice.” 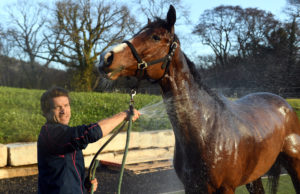 Promising five-year-old Shomen Uchi gets washed down by his trainer after exercise | Photo: Bill Selwyn

You might think that riding out and schooling for leading trainers would have been the perfect grounding for a training career, but Thomas says: “When I was a jockey I never imagined I would become a trainer, so when I rode out I didn’t focus on their side of the job. I was thinking about my rides that afternoon and the next day – now I would be straight into the feed room or talking to the head lad about supplements.

“One thing I did learn is not to complicate things. Don’t change the routine, just keep it simple, because that is how horses like it.

“Being in Lambourn can work against a young trainer because there are so many variations, so many gallops and so many other trainers to watch out for. Sometimes you just need your own plan and to stick to it. Coming here was the making of me.”

Thomas’s route into racing and the weighing room began at the stables of Abergavenny trainer David Evans, whose yard was near his home. He says: “I went to David’s when I was 16, and soon learned every motorway in Britain and how to tack horses up very quickly because there were a lot to get out. I have to thank David for a lot – riding all those young horses every day taught me plenty.

“I’d ridden in pony races and a few point-to-points, then David put me up in some amateur races even though I was clueless. I got a few bollockings but eventually things started to stick.”

He then moved to the adjacent county of Herefordshire and a position with Venetia Williams. “Everything else that came along was down to Venetia,” he continues. “She was instrumental in my success – she’s a fabulous trainer and a great woman.

“She taught me how to have horses in the right position in races, and a lot about sitting still on horses and allowing them to be as natural as possible when they are jumping.

“You see that in Charlie Deutsch. He is the epitome of a horseman and that’s partly down to Venetia. That’s how she likes her horses to be ridden, to see horses coming up out of a jockey’s hands and doing what the horse wants.”

Jockey pressures
Tom Queally’s association with Frankel might be the defining jockey/horse partnership of this century, but Thomas’s role in the story of a great steeplechaser will have left an indelible mark on many fans of jump racing.

It peaked in March 2008, when on an afternoon at Cheltenham the racing world was held in thrall as Thomas held the reins of Denman in his hand. Denman was a literal giant among steeplechasers and the gelding who denied Kauto Star the immortality that is bestowed upon triple Cheltenham Gold Cup winners. 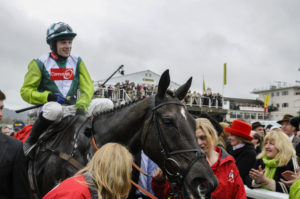 Sam Thomas and Denman are welcomed back after victory in the 2008 Cheltenham Gold Cup | Photo: George Selwyn

Yet 2008 contained both the zenith and nadir. Seven months after the Gold Cup win, Thomas suffered two high-profile reverses when, as number two jockey at Paul Nicholls’ yard, he deputised for the injured Ruby Walsh on Big Buck’s in the Hennessy Gold Cup and Kauto Star in the Betfair Chase, unseating from both.

He was then ‘jocked off’ another of the stable’s superstars, Master Minded, who was about to run in the Tingle Creek Chase. Owner Clive Smith attempted to ease the situation by speaking frankly to the press, but giving his reasons for booking AP McCoy, the multiple champion jockey, was one thing. Referring to an apparent lack of confidence on Thomas’s part? That was questionable. A broken arm can mend, but can confidence?

Thomas says: “When I lost the ride on Master Minded, I wasn’t reading anything [in the press], but I was very aware of the situation. Effectively I wasn’t second jockey any longer. It was difficult for Paul, and I recognised he had to keep owners happy. I don’t remember crying, but if I did, I had a fantastic family that helped get me through it all.

“I regret nothing, because I had some marvellous highs on some wonderful horses.”

Those 88 wins gained in Thomas’s Gold Cup-winning season became 78 the following year, and then steadily dwindled to nothing over the following six seasons. He knows more than most about climbing to the summit and then descending it under the spotlight that goes with top-level sport.

“There’s always pressure, but young jockeys have to enjoy the job because it’s the best thing they’ll ever do”

“I was probably a bit lost when I stopped,” he relates. “It took me a while to come to terms with what I was going to do. Even now, standing here, if you offered me a ride in a Grade 1, I would take it, because it’s something you never lose.

“There’s no replacement for the adrenalin rush. I was hoping to find the glory days again, but I lost confidence in a tough and brutal sport. If you’re not at the top of your game, people won’t use you.

“Confidence was a big part of my riding and I remember as a young jockey Venetia [Williams] calling me into the office and saying this is how I want you to ride, with confidence, because that’s why I employ you. She would keep morale up.

“When I took the job at Paul’s I had the same attitude, which was the reason I was picked for the position. I rode how I rode, and they wanted to use me. As time goes on, and you’re riding top horses who are favourites in top races for leading owners, the pressure starts to build. When a few things don’t go so well the momentum swings against you.

“I was lucky having Venetia to turn to and ride for, but I do really regret not being more loyal to her when she was being loyal to me. I was focusing on riding for Paul and I should have been thinking of riding for Venetia, but you don’t realise it at the time.”

He adds: “As the world evolves the goalposts change, and now everything is in the public eye. When I first started as a jockey you could go to the pub on a Sunday and have a few beers with your mates to unwind, but now if a jockey is photographed in a pub people form an opinion of them. Jockeys have to adapt, but if things don’t go well, it’s very unfair that people can be abusive on social media.

“There’s always pressure, but young jockeys have to enjoy the job because it’s the best thing they’ll ever do.” 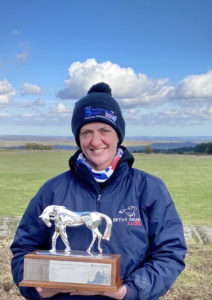 Up Next
Finalists revealed for 2022 Godolphin Stud & Stable Staff Awards