It is 22 years since Roger Charlton kicked off his training career with a Derby double; he’s dreaming of more success

The sheet-metal gate is symbolic of what lies beyond it. Cut into its frame is an opening large enough for people to enter, yet small enough to prevent loose horses from leaving the premises. The gate resembles a buttress against the world outside. To step through the opening is to step back in time to another era.

In gaps between the cobblestones at Beckhampton House stables lie fragments of horseshoes worn by equine legends. More than 30 Classic winners have passed through that gate since 1820, when Billy Treen, the coaching house publican concerned at the lack of passing horse trade, turned his hand to training. They include Quest For Fame, the last of ten Derby winners, trained in his first year at Beckhampton by Roger Charlton in 1990.

The roll-call also embraces Sun Chariot, the winner of three Classics for King George VI in 1942, and who so enchanted a 16-year-old Princess Elizabeth that she became a convert for life on her inaugural visit to a racing stable. It is therefore appropriate that in Diamond Jubilee year, the stable has its first Classic candidate for some time.

The hope is that the magic dust embedded in every brick at Beckhampton rubs off on Top Offer. It is a tall order, since the colt has much to prove. Although he did not race again after his striking debut victory at Newbury in August, there are grounds for optimism. Charlton plays down aspirations for the herd of two-year-old winners he saddled at premier tracks last autumn. Yet when it comes to Top Offer, this naturally guarded man is willing to entertain what may lie ahead. 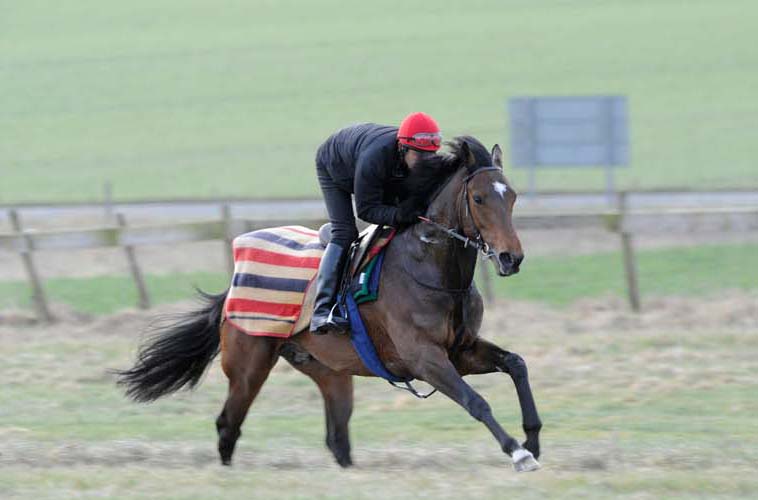 Top Offer is heading for the Greenham Stakes

The Greenham Stakes on April 21 is the clutch. There will be no 2,000 Guineas bid if the son of Dansili is not ready for the Greenham but, barring setbacks, that looks unlikely. The dark bay colt resembles a tower of strength as he ambles up the Polytrack gallop that runs through the picturesque Wiltshire downland between Swindon and Devizes.

“He is a fine, good-moving colt whose work was visually encouraging right from the start,” Charlton says of the 2,000 Guineas 8-1 chance. “The way he worked with older horses meant that we were expecting him to win when he went to Newbury. It would have been a big disappointment if he hadn’t.”

No sooner has Charlton spoken these words than he feels obliged to mitigate them. “He then hurt himself,” he says of Top Offer. “It was disappointing we were unable to run him again to find out more about him, so we find ourselves in a situation where we have a horse with a reputation.

“Still, the experts tell us that last year’s two-year-olds were not a vintage bunch. He has got a bit of catching up to do in terms of experience, but that’s not unusual these days. Natural ability counts for a lot.”

Further encouragement arrives when Charlton reflects on the groundwork he is putting into Top Offer. “Inchinor was never going to be a Group 1 horse so I got him very fit to win the Greenham (in 1993),” he reflects. “This is a different type of horse. He is big and strong, with lots of natural exuberance. And I’m mindful of the fact that a lot of good horses have been beaten in the Greenham.”

Top Offer is from the same Juddmonte source that gave Charlton a flying start to his career 22 years ago. Within three months of saddling his first runner he stood in the winner’s circle on Derby day with Quest For Fame. Four days later he annexed the Prix du Jockey-Club with Sanglamore. And Deploy would have completed a unique treble but for Salsabil’s supplemented presence in the Irish Derby.

Deploy’s defeat will have generated disappointment among headline writers in Fleet Street who were doubtless braced to declare: “Charlton scores hat-trick for England.” In reality, however, the man is about as far removed from football culture as it gets.

Rational and methodical, he is the presentable face of a sport that grates him in the extreme by its propensity to constantly undermine itself. He maintains he will never make money training from Beckhampton, which is owned in trust, but he cares less for that than his fostering of a community spirit within the dedicated staff of an estate of more than 700 acres.

“My father was a farmer and I once took him to see an accountant who explained to him how he could shelter his assets from the full tax burden,” Charlton says. “My father walked out halfway through and said to me afterwards, ‘Please don’t do that again.’ He took his obligation to society more seriously than most.”

In many ways Charlton makes an ideal tenant at the historic property. His moral compass reflects that of previous Beckhampton incumbents in Jeremy Tree, Sir Noel Murless, the aforementioned Darling and his father, Sam. Although there are woodchip and polytrack gallops, much of the training is still done on some of the finest grass gallops in the country. A summer not without its share of rain last year came as a blessing.

“The gallops were in marvellous condition,” Charlton reflects. “All-weather gallops are great up to a point, but you can work horses with confidence on grass. You can press a little harder, teach the horses a bit more, find out a bit more for yourself. I think it helped us to have a successful season last year.”

Although prize-money in excess of £1.4 million was banked in 2011, there is good reason to set the bar higher this year. Charlton’s two Pattern winners, Sea Of Heartbreak and Genki, remain in training – as do Cityscape and Definightly, who posted Group victories for the stable in 2010.

Top Offer is a different type of horse. He is big and strong, with lots of natural exuberance

Then there’s Bated Breath, who earned just shy of £250,000 at home and abroad after narrow failures in Group 1 races at Haydock and Woodbine, in Toronto. Among the older horses, other likely sources of bounty include Al Kazeem, Cry Fury, Primevere, Proponent, Thistle Bird and Zero Money.

These horses make a sound platform from which to launch a promising collection of three-year-olds. There are 16 individual two-year-old winners in their ranks. It is too early to assess their collective merit but they are an enticing proposition given that many come with attractive pedigrees redolent of his owner/breeder clientele.

There is also Camberley Two, who took his trainer on an eventful journey last season when the horse gained the first of six consecutive handicap victories off a mark of 53 at Brighton. Charlton never found it easier to place a horse in his life. “Every time I wanted to run him under a penalty there were lots of options because of his [low] rating,” he mused. “Conversely, if you win a 0-90 handicap you have to wait three weeks for the next one.”

Charlton is anxious to dispel the notion that he spent ages plotting Camberley Two through the handicap minefield. In a tone betraying mild embarrassment, he maintains that the horse just kept on improving. However, talk of low-grade racing sees him throw his hands up in frustration and no little anger at what he perceives is the sport’s soft underbelly. 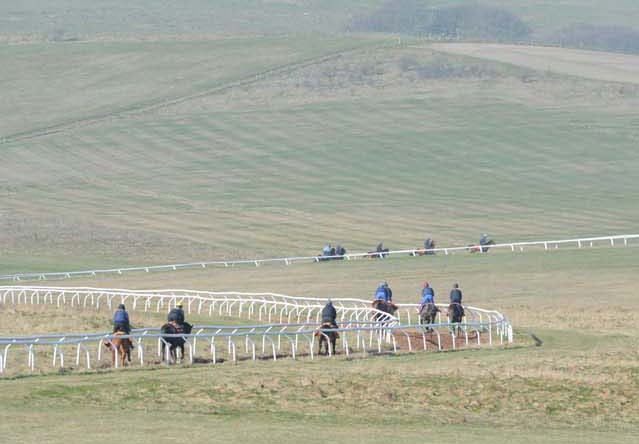 “We are extremely fortunate in Britain,” he says. “Racing in many other countries is rubbish when you compare it to the variety of our tracks, our facilities, our big races. But in other ways we are lucky to have the Queen patronising what can be, let’s face it, a pretty dodgy sport.

“We love to shoot ourselves in the foot. Although we still have the best horses running here, there has been wave after wave of jockey, trainers, all sorts of people caught up in corruption. The whole thing is appalling. You get to the stage where you wonder what is around the corner. You wonder what could possibly drag us down ever more, but then something does.

“Sometimes I am considering a jockey for a horse and I forget he’s been suspended or whatever. There has been so much of it that I can’t keep up. Okay, so we need the characters, a bit of spice, a bit of a plot somewhere. But it has gone over the top and I believe is damaging us. What must outsiders think?”

This is Charlton’s fatalist side, in this instance arising from indignation that little has changed in the perception of racing as a magnet for the unscrupulous. It was ever thus and will remain so long after Charlton is gone, yet he cannot help but ferment over the constant tarring of racing’s image.

It has worn him down, but not to the extent he can ignore it completely. It still plays on his conscience.

“It’s pretty pathetic of me, but when I first started I used to get very involved at the National Trainers’ Federation,” he says. “After a while I felt that all the effort and strain of it made no difference. It just makes you angry and aggressive, so I felt the best thing was to concentrate on training and surviving.”

Charlton may have found the ideal outlet for his frustrations in his website, a top-of-the-range affair with daily posts from him and regularly updated video footage. It has created strong demand among followers of a stable, which never runs horses for the beer. He has also embraced Twitter with a gusto surprising in one of his inherent shyness.

This new-wave onslaught illustrates Charlton’s conviction that nothing is worth doing unless it is done properly. “It seems to be popular,” he says, “but I don’t know whether it does me much good. There is quite a lot of interaction via emails – although largely, I suspect, from people who could afford to send me a horse only if they won the lottery.”

Nevertheless, Charlton wakes up each morning to the sound of echoing hooves that can only make it feel good to be alive and ensconced in such a fabled establishment. That alone is a blessing. He may not have instant access to the raft of wealthy patrons boasted by his predecessor, Jeremy Tree, but there is much to anticipate in 2012. It might just have the makings of a season to remember. 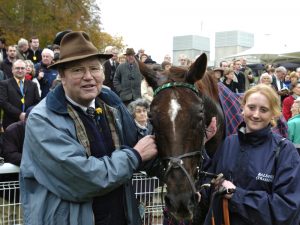 Up Next
National treasure