Rock rolls back the years

The dual Group 1 winner Society Rock added another prestigious sprint race to his tally with victory in the Group 2 Duke of York Stakes on his seasonal resumption, beating Lethal Force by a head with Prix de la Foret winner Gordon Lord Byron back in third.

Now six, the son of Rock Of Gibraltar is not without his quirks and was loaded last of the 17 runners by stalls expert Steve ‘Yarmy’ Dyble on the Knavesmire. Having jumped satisfactorily, he tracked over from his stand-side draw to stalk the leading pack down the centre of the course before switching back to the rail to launch his challenge under Kieren Fallon, who also was his partner for most recent previous success in last season’s Betfred Sprint Cup.

In 2011, Society Rock won the Golden Jubilee Stakes and this year’s race, now known as the Diamond Jubilee Stakes, will be his next target, according to James Fanshawe. The trainer also indicated that his other Royal Ascot-winning sprinter, Deacon Blues, who spent last season on the sidelines with a tendon injury, is back at his Pegasus Stables and in regular daily exercise but is yet to step up to fast work.

Society Rock, who has now earned in excess of £828,000 in prize-money, races for octogenarian Simon Gibson, who lives just outside Newmarket at Exning and has a race named in his honour at the Rowley Mile on Thursday. 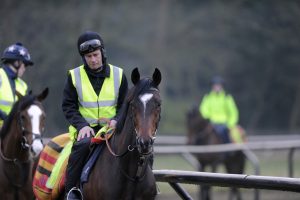 Up Next
Stoute’s resurgence continues