Ballymacoll Stud homebred romps to victory in the Musidora

After a relatively quiet couple of seasons, Sir Michael Stoute will be delighted with the current form of his string, which was underlined by Liber Nauticus, heroine of the Group 3 Tattersalls Musidora Stakes on the opening day of York’s Dante Meeting. The statuesque daughter of Azamour is now third-favourite for the Investec Oaks on May 31 behind 1,000 Guineas third Moth and Lingfield Oaks Trial winner Secret Gesture.

Despite having raced just once previously, Liber Nauticus, whose dam Serres is a three-parts-sister to St Leger and dual Breeders’ Cup Turf winner Conduit, was sent off 4/6 favourite for the Musidora and ground her way home down the straight, seeing off a momentary threat from the John Gosden-trained Woodland Aria. The challenger eventually finished third behind the staying-on Romantic Settings, who was a length and a half adrift of the winner.

Since the beginning of May, Stoute’s Freemason Lodge stable has sent out 11 winners, including Dank, who won the Group 3 Dahlia Stakes at Newmarket at the Guineas meeting for owner/breeder James Wigan. Another regally bred filly to have saluted in the last week is Cheveley Park Stud’s Enobled, the second foal of Lockinge Stakes winner Peeress, by Dansili.

One cloud on the horizon is the minor setback suffered by Derby fancy Telescope, who was set to make his seasonal debut in the Dante Stakes on Thursday but is on the easy list after sustaining grazes to his near-fore and near-hind legs while in a horsebox. The trainer hopes to be able to take him for a racecourse gallop prior to the engagement at Epsom. 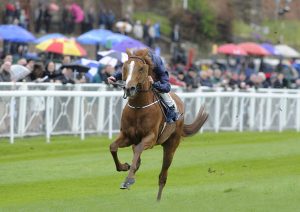 Up Next
Ballydoyle’s campaign of Battle