A surprising lacklustre first two days for the Willie Mullins’ stable was soon a distant memory after day three as the Closutton team took out four of the seven races including the showpiece, the Stayers’ Hurdle with Nichols Canyon.

Stepping up to three miles for the first time, Nichols Canyon was held up towards the rear by Ruby Walsh as 2015 winner Cole Harden set a more than honest pace.

With the 12 strong field coming down the hill for the last time, the Neil King-trained Lil Rockerfeller challenged the leader on the outside with warm favourite Unowhatimeanharry looking threatening between horses.

Lil Rockerfeller kicked on gaining a three length advantage coming to the last. All the while Walsh was weaving through the field on his mount and challenged after the last on the stand rail.

The Mullins charge got on top on the run to the line taking the crown by three quarters of a length.

“He’s a little warrior. He switched off, he jumped and we just crept away. Lil Rockerfeller was battling back at me but he kept going all the way to the line,” reflected Walsh.

“He just started to come back to himself the last 10 days, Katie [Walsh] rode him at the Curragh the other day and said he worked very well.”

For owners Andrea and Graham Wylie, this takes their tally in the race to four. Their previous three victories came with one of the very best staying hurdlers Inglis Drever.

Mullins said: “It was some performance. I didn’t particularly think the three miles would suit. He is tough, I just thought he would be too keen over that trip. With age, a lot of these horses learn to settle.

“His last bit of work I thought we would change his stable and work rider. Sometimes when horses are not doing anything you just change things for the sake of changing them.”

Earlier in the afternoon, Yorkhill’s jumping stood the test as he strode on to win the JLT Novices’ Chase by a length.

The son of Presenting was always travelling well in the hands of Walsh and was produced with a run on the inside over the last two.

Former Arkle hero Un De Sceaux made it another Cheltenham Festival win by ousting his rivals in the Ryanair Chase over two miles and five furlongs.

In his typically exuberant style, the nine-year-old took up the running after the fifth and galloped on strongly up the Cheltenham to score by a length and a half. 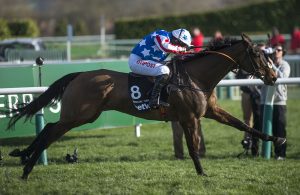 Up Next
Fourth time lucky for Tiara