Noel Fehily’s fairytale start to the Cheltenham Festival hit new heights as he partnered Special Tiara to glory in the feature on day two, the Betway Queen Mother Champion Chase.

Hot on the heels of a second Champion Hurdle victory yesterday, the 41-year-old sent his gelding straight to the front as expected setting honest fractions.

With Douvan going backwards after the third last, Special Tiara was still three lengths clear on the turn in for the second last.

Three lengths up after the last, the ten-year-old found enough to hold off a surging Fox Norton to win by a head.

He had finished third in the last two renewals of the Champion two mile contest, going down by only three lengths 12 months ago against the mighty Sprinter Sacre.

“Unbelievable. He’s such a great ride, he’s everything a two-mile chaser should be. He’s a very good horse,” reflected Fehily.

“He has one way of running and that’s flat to the mat and jump – I just let him get on with it.”

For his trainer Henry De Bromhead, this takes his tally in the race to two. His first came in 2011 with Sizing Europe for owners Ann and Alan Potts.

De Bromhead said: “He seemed in great form coming into it, but it was hard to believe (could win) with Douvan and everything else – Douvan had looked so good.

“For our lad, he just tries his heart out and no-one deserves it more.”

The son of Court Cave took up the running from flag fall and although strongly pressed by favourite Neon Wolf after the last managed to hold that rival at bay by a head.

He’s everything a two-mile chaser should be

This year’s renewal of the RSA Chase produced another thrilling finish and saw another horse make all in the shape of Might Bite.

Nicky Henderson’s charge led after the second and was almost 20 lengths clear coming to the second last.

Appearing to slow down dramatically after the last, stable mate Whisper came with a strong run to lead, but Nico de Boinville managed to get his mounting going again and took victory by the slightest of margins. 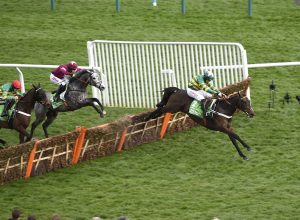