Champion jockey Silvestre de Sousa – who had a scare following an unseat after the opening race – captained the Rest of the World team to a closely fought victory in the 16th edition of the Dubai Duty Free Shergar Cup.

All four teams had a chance of lifting the prize going into the last leg, but a fourth placed finish by Keniche Ikezoe aboard Suqoor in the concluding Shergar Cup Sprint, was enough to see the Rest of the World over the line, securing a fifth Shergar Cup in the process.

Despite leading the field by 13 points after the fifth race, the Rest of the World ultimately held off the late thrust of Team Europe by just three points, after Thierry Jarnet led home a one-two for the boys in blue aboard the Dean Ivory-trained Kadrizzi in the last.

Although Brazilian-born de Sousa was to finish runner-up aboard Combative in the Shergar Cup Classic, he wasn’t to ride a winner on the six-race card. Instead the bulk of the points were claimed by teammates Gavin Lerena and Kenichi Ikezoe – both of whom were riding in Britain for the first time.

Lerena – a multiple champion jockey in South Africa – notched a fine big-price double, his first coming aboard the Amanda Perrett-trained Arch Villain in the Shergar Cup Stayers over 2m.

After controlling the pace from a wide draw, Lerena didn’t panic on the seven-year-old who lost the lead five furlongs out to Ikezoe – better known for his association with Arc runner-up Orfevre – who made an early dash for home aboard favourite, Sea Of Heaven. The 31-year-old’s patience reaped dividends as he came with a well-timed effort on the inside to get up by a neck on the post.

The South African’s second winner came in the feature contest the Shergar Cup Classic, in what turned out to be another one-two for the Rest of the World team. Lerena puts behind him a disappointing spell in Hong Kong and will be seeking a few rides next week as his holiday on these shores continues.

“Just to get on the horses back was amazing and with all the crowds and people,” reflected Lerena.

“To ride on this world renown course is truly amazing and to finish it off with a win is even better. It would be fantastic if we could get a ride at Newmarket or so next week, but it’s been a fantastic feeling and it’s great for South Africa.”

While the Girl’s team were unable to claim back-to-back victories, Turner’s dream of making a one-off winning return came true in the Dubai Duty Free Shergar Cup Mile. The 33-year-old who has faced speculation regarding a permanent return to the saddle, reminded Ascot’s racing fraternity of her prowess in the saddle by partnering the Harry Dunlop-trained Early Morning to a comfortable victory.

It was the easiest decision ever to come here, and it’s so nice and special to do it

Always to the fore on the grey son of New Approach, Turner sat motionless two furlongs out and when she pushed the button her mount took the lead with a furlong to go. Despite being hard pressed by Great Britain and Ireland captain Joe Fanning and Emell, the duo held on to claim the £22,000 first prize.

Turner said: “It was the easiest decision ever to come here, and it’s so nice and special to do it.

“I kept fit enough for vain reasons as much as anything else and it’s just such a pleasure.”

Surprisingly, the prestigious Alistair Haggis Silver Saddle didn’t go to Lerena but instead went the way of French veteran Jarnet, who in the process received an additional £3,000 bonus prize.

Best known for his recent exploits aboard dual-Arc winner Treve, the 49-year-old doubled up in both sprint races – the Shergar Cup Dash and the Shergar Cup Sprint – ending proceedings on 38 points, eight clear of nearest pursuer, Lerena. 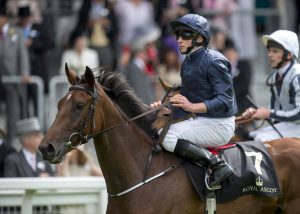 Up Next
Three-time champion not to rush return