Three-time champion not to rush return

On the back of yet another polished week in the saddle at Glorious Goodwood – picking up no fewer than eight winners including two Group 1s – Ryan Moore has decided to take a break from race riding following advice from a specialist.

The three-time champion jockey has reportedly been suffering from a hip problem over the past few weeks, and will take complete rest with no date yet confirmed for his return to the saddle.

The 32-year-old was last seen in action aboard the Aidan O’Brien-trained Alice Springs, who he eased inside the final furlong when finishing a disappointing eighth in the Group 1 Prix Rothschild at Deauville on Sunday. Since then he has been enjoying a holiday with his children and wife Michelle in Portugal.

“I have been a bit sore for the last couple of weeks and been advised by a specialist that complete rest is the best option,” said Moore in a statement to the Press Association.

Moore has had an exceptional season even by his standards, as his partnership with Aidan O’Brien and Coolmore has continued to flourish with almost relentless success at Group level. They have combined to collect nine Group 1s so far this season, the first and last of those being with super filly Minding, who made no mistake last weekend when seeing off her opposition in the Nassau Stakes.

In the immediate future, Moore will miss the ride aboard leading two-year-old Caravaggio, in the Group 1 Keeneland Phoenix Stakes this Sunday. The son of American sire Scat Daddy, proved himself a standout colt when scoring impressively in the Coventry Stakes at Royal Ascot, despite being disadvantaged by racing on the stands side in the early stages and drifting across the track.

Already favourite for next year’s 2,000 Guineas, he will no doubt be going off red-hot favourite to make it four-straight wins under deputising jockey Seamie Heffernan.

The Brighton-born maestro will have some tough decisions to make as York’s Ebor meeting looms just under two weeks away. The likes of the O’Brien-trained Idaho, placed in two Derby’s has been earmarked for the Great Voltigeur Stakes, while Epsom Derby runner-up US Army Ranger and Minding have still been left in the Group 1 Juddmonte International Stakes on August 17.

Up until now, Moore has been in contention for the jockeys’ championship but has been pushed out in the betting by the bookmakers following this recent turn of events.

On 57 winners, he is now three behind reigning champion jockey Silvestre de Sousa, who rode a winner at Sandown on Thursday evening for better known jumps trainer, Jeremy Scott. 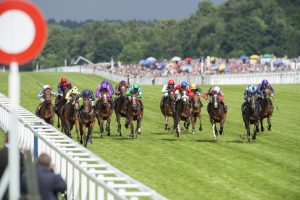 Up Next
Dettori to make his tenth Shergar Cup