The Gigginstown House Stud silks were once again in front where it mattered on the first day of the Irish Grand National meeting, as Road To Respect edged out a thrilling finish to the Grade 1 Ryanair Gold Cup.

All eyes were on JLT hero Yorkhill partnered by Ruby Walsh who was seeking his fourth win over fences.

Road To Respect took up the running from flag fall but after the fourth Walsh allowed a keen going Yorkhill to stride on.

The leader began to jump violently out to his left and despite forfeiting ground was still about level with Bryan Cooper and Road To Respect on the turn for home.

Graham and Andrea Wylie’s star regained the lead after the third last and established a three length lead between the second and last fences.

A very slow and awkward jump at the last left the door open for Noel Meade’s charge to renew his effort and he got up to win on the short run-in to score by a neck.

Cooper said: “We went a good gallop and Ruby was obviously jumping out to his left and to be fair my lad was going a little left as well. I was jumping and winging everywhere and I was keen not to let Ruby off too quick. My lad took me everywhere.

“My lad is tough and galloped all the way to the line.”

My lad took me everywhere

A son of Gamut, he now becomes a Grade 1 winner for the very first time at the age of six.

“We thought about running him in the [Irish] National. He worked on Wednesday and we just thought he might need another week,” reflected Meade.

“If he’d worked better we might have run him in the National, but it’s all worked out great.” 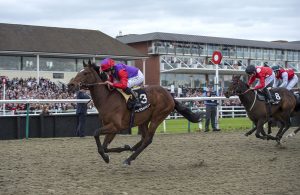 Up Next
Convey clears away in Easter Classic