Convey clears away in Easter Classic

A record-breaking turnout of 10,800 spectators witnessed the fourth ever All-Weather Finals Day at Lingfield Park, which was rounded off by the sublime victory of Convey in the Easter Classic.

Under three-time champion jockey Ryan Moore, the five-year-old was positioned just off the leaders in the early stages.

As the nine-strong field carted down to three pole, Convey was brought to the outer of the first two travelling strongly.

Into the straight, the favourite quickly picked them up and inside the final furlong came away to win by a comfortable length and three quarters from the Archie Watson-trained Absolute Blast.

A son of Dansili, Convey only swapped ownership to Roberts Ng for a price of £130,000 at beginning of the year having previously run for Juddmonte.

For Sir Michael Stoute he has now won four races one of which being the Group 3 Winter Derby back in February.

“He had very good form, he’s a Group horse and I think the surface suits him well,” reflected Moore.

“He’s always a horse that we’ve held in high regard and he’s grown up. It went too well I was a little bit close but he was always in control.

“People have been a little harsh on him his form was very solid over last year.”

Earlier in the afternoon, Kimberella came through with a well-timed run under Paul Hanagan to claim the All-Weather Sprint.

The former Dandy Nicholls in-mate got the better of Gracious John in the final strides scoring by half a length, following up his course and distance win last month.

Yorkshire trainer Ruth Carr enjoyed one of the finest days of her training career so far after taking the All-Weather Mile with Sovereign Debt.

In the hands of James Sullivan, the eight-year-old battled to the front in the closing stages repelling the late surge of Nimr by a neck. 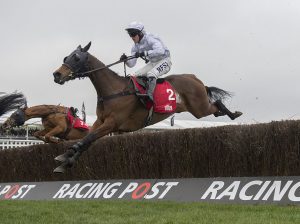 Up Next
Grand servant Holywell retired