A record edition of the Tattersalls December Foal Sale came to a close in Newmarket on Saturday night following four days of memorable trade.

Whitsbury Manor Stud, who sold the session-toppers on both Thursday and Friday, was leading vendor thanks to the sales of 19 foals for a total of 2,201,500gns.  Juddmonte Farms reigned as leading buyer with four bought – all fillies – for a total of 2,425,000gns.

“Strong yearling sales will always drive demand for foals and the extraordinary strength of the Tattersalls October Yearling Sales has been followed by a Tattersalls December Foal Sale which has achieved significant increases in average and median as well as a record turnover in excess of 35 million guineas,” said Tattersalls chairman Edmond Mahony. “The cream of the British and Irish foal crop has been assembled here at Park Paddocks and buyers at every level of the market and from throughout the world have all contributed to yet another record breaking sale in a year of extraordinary sales at Tattersalls.

“To see so many British and Irish breeders rewarded so handsomely this week reflects the quality of the stock which they have brought to the market and we should thank the consignors for their confidence in the Tattersalls December Foal Sale which consistently showcases the finest foals to be found in Europe. The buyers, whether looking to race or to pinhook, know that the Tattersalls December Foal Sale will satisfy every possible requirement and the competition for quality foals has been unrelenting.

“In addition to Whitsbury Manor Stud’s outstanding one million guineas sale topping Kingman filly, the sale has produced the four highest priced foals in Europe and a record-equalling 27 foals sold for 200,000 guineas or more, all of which has demonstrated the sustained appetite for the best European bloodstock which has been so evident at every Tattersalls sale in 2022.

“While the December Foal Sale is always dominated by the tireless and loyal British and Irish pinhookers, their European counterparts have also made their presence felt, as have a significant number of the world’s leading owners who recognise the December Foal Sale as a consistent source of Classic and Group 1 performers. It is no coincidence that the connections of the Group 1 winning two-year-olds Blackbeard and Chaldean, both bought at the 2020 December Foal Sale, have again targeted this sale and international buyers from America, China, France, Germany, Italy, Kazakhstan, Spain, Switzerland and from throughout the Gulf region have also made significant contributions, particularly at the top of the market.

“The international influence will without doubt be even stronger as we move on to the Tattersalls December Mares Sale which starts on Monday and features the inaugural Sceptre Sessions for elite fillies and broodmares. We have an exceptional catalogue which includes some of the best race fillies and mares to be offered at public auction for many a year and we look forward to ending the Tattersalls year on a high note.” 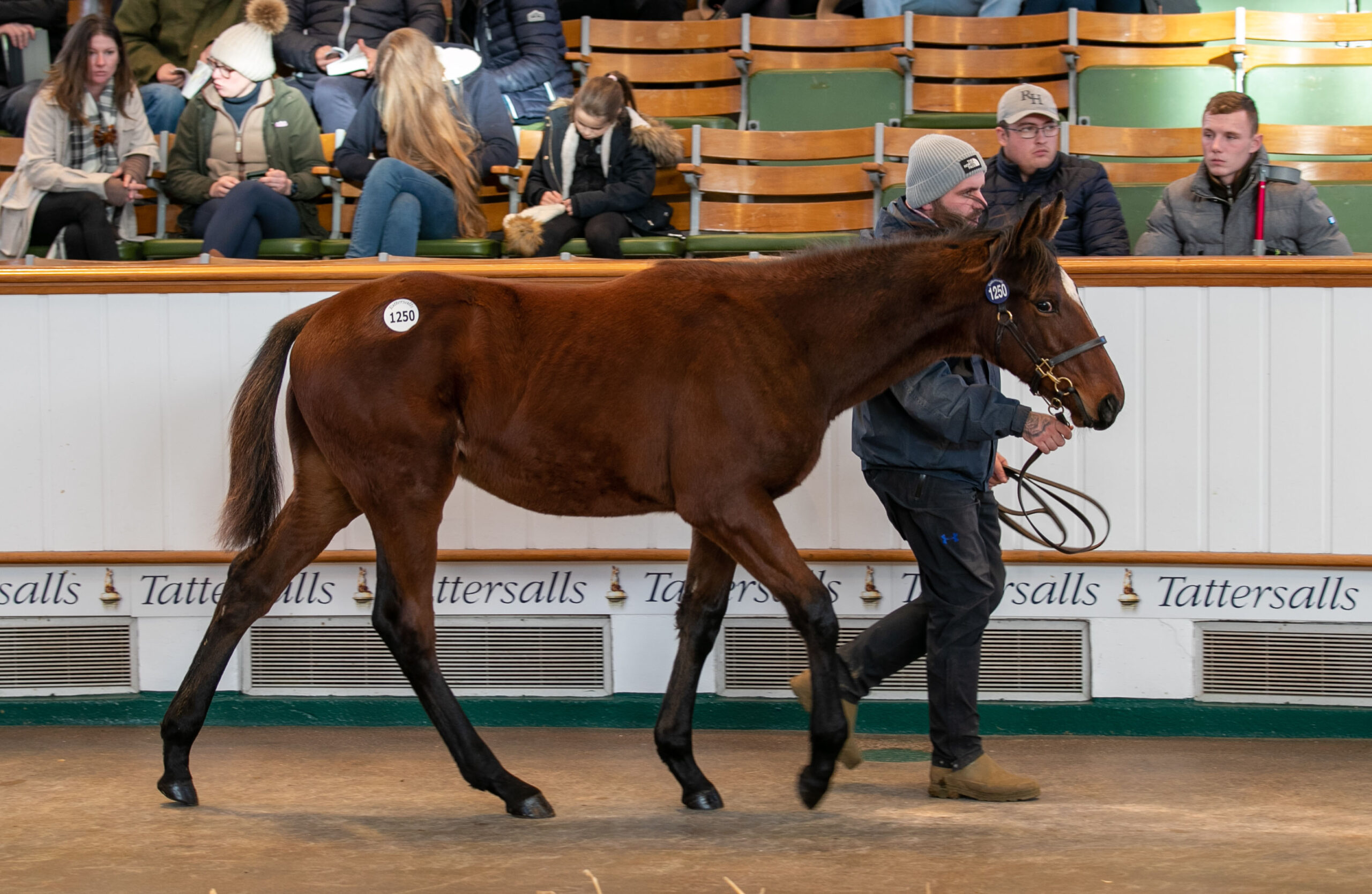 This Masar colt provided a handsome return for Overbury Stud when selling for 110,000gns. Photo – Tattersalls

Saturday’s session once again showcased the popularity of the first crop by Sussex Stakes winner Mohaather, who supplied two of the day’s top five lots.

They were led by a colt out of the young Exceed And Excel mare Time Of Change, a sister to the Gimcrack Stakes runner-up Taajub, who was sold to Shadwell for 110,000gns.

“I thought this was a really smart horse and a lot of people thought the same,” said Shadwell racing manager Angus Gold. “I heard he had ten vets on him so he was always going to cost a bit. He is out of a half-sister to a horse who ran second in the Gimcrack and was a handy horse, and this horse looks a sprinter. If he is any good he will be fast and hopefully will be one to get the stallion off to a good start.”

He added: “Obviously, we are a bit biased as Mohaather was a very special horse for us. We thought he was slightly underrated if anything because for me what he did at Goodwood that day in the Sussex Stakes was out of the ordinary – I have not seen a horse quicken like that since Kingman in the same race.

“So we are big fans and I have liked the stock I have seen. What I particularly liked is that, leading into this week, lots of people have told me that they have a really nice Mohaather foal, which is great to hear. We bought one two days ago [a colt from Byerley Stud for 90,000gns] and the vendor told me they had an even better one at home. There are some really good vibes about him.”

Overall, Shadwell came away with seven foals worth a total of 1,312,000gns. In addition to the Mohaather foals, their collection included a Ghaiyyath half-sister to the Silver Flash Stakes winner Tanaza who cost 375,000gns out of the Norelands Stud draft.

“I spoke with Sheikha Hissa and she was keen to get some foals to supplement the racing team, if we could buy at relatively sensible money,” said Gold. “Over the last two years it was about getting it all to a manageable size. The family has got a bit more structure to the whole organisation now and I think Sheikha Hissa is just trying to see what sot of size she would like it to be. We had about 75 to 80 horses in training this year and hope to have around 100 next season.”

His price was later matched by a second-crop son of Masar from Overbury Stud who sold to Yeomanstown Stud.

Remarkably, his dam, the Cumberland Lodge Stakes winner Hawaafez, was snapped up for just 14,000gns out of the Shadwell draft at this year’s Tattersalls February Sale. Since then, the page has improved appreciably, notably via the exploits of her three-year-old Rogue Millennium, winner of the Lingfield Oaks Trial for Tom Clover. Another daughter, Naomi Lapaglia, made a good impression when winning on debut at Kempton Park for Richard Spencer earlier this month.

“Richard Brown [of Blandford Bloodstock] bought the mare for me here in February,” recalled Simon Sweeting of Overbury Stud. “I was not around and he did it himself.

“It looked like a chancy buy to start with but the mare was an exceptional racehorse and Rogue Millennium then came along, and everything else has landed into place. The two-year-old is now one for one and her Kingman yearling has gone to George Boughey.

“It is definitely a progressive family but that sale did take me by surprise – a lovely surprise to have! He was a late foal [May 4] but he has been very straightforward and everything has worked out well.”

The Tattersalls December Mares Sale takes place from 9.30am on Monday. 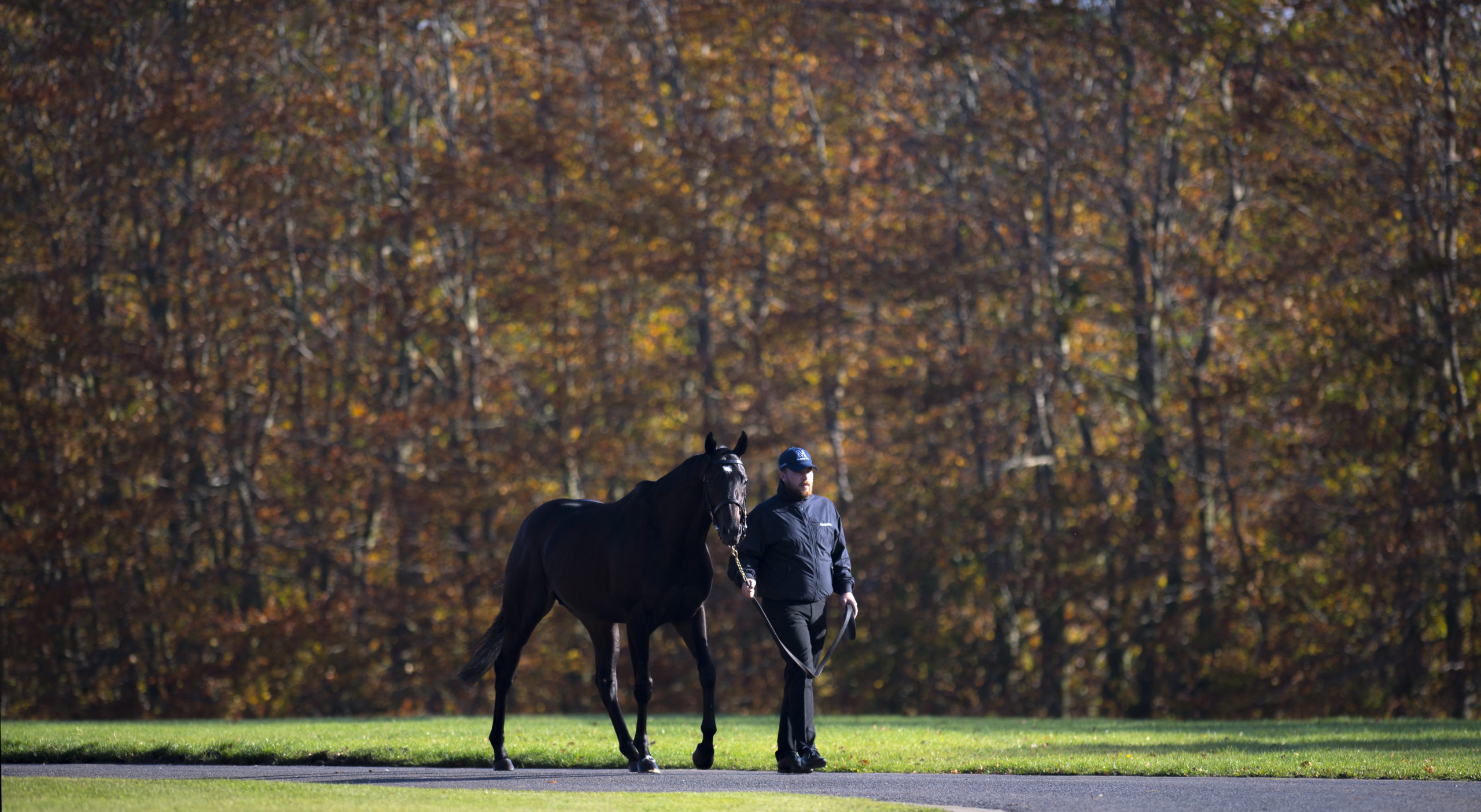 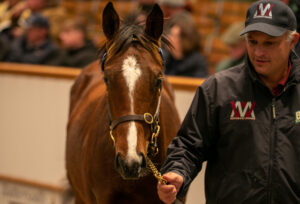 Up Next
Juddmonte interest fuels exceptional day at Tattersalls