‘The family want to reinvest in pedigrees, this is a very strong page and with Chaldean, who knows what could happen next year’

Juddmonte Farms’ desire to ‘reinvest in pedigrees’ was on show during an extremely strong third session of the Tattersalls December Foal Sale in Newmarket on Friday.

On a day when the average rose by 19 per cent to 110,495gns, Juddmonte came away with three of the top four lots led by a Kingman half-sister to their 2,000 Guineas hopeful Chaldean who was snapped up out of the Whitsbury Manor Stud draft for a million guineas. The sale made her the sixth most expensive foal ever sold at a Tattersalls December Foal Sale.

Remarkably, her dam Suelita was bought by Whitsbury Manor’s Chris Harper for just 21,500gns at the 2013 Tattersalls December Mares Sale. A four-time winner in Italy, the mare has gone on to be an outstanding producer for the stud with no fewer than five stakes horses to her credit led by the Dewhurst Stakes hero Chaldean, himself a 550,000gns purchase by Juddmonte out of this sale in 2020. Another colt out of the mare, Alkumait, won the Mill Reef Stakes for Marcus Tregoning and now stands at Castlefield Stud.

“It’s been almost two months since the Dewhurst and it feels like a very, very long time ago,” said Whitsbury Manor stud director Ed Harper. “Thank goodness we had her entered in the sale because I don’t think I could have hung on another year to have sold her.

“It’s lovely to get a big round figure like that, it’s fantastic, and we really appreciate Juddmonte’s support. They supported us by buying Chaldean and they’ve done it again, and hopefully this filly can repay them on the racetrack before perhaps going to Frankel in a couple of years time – hopefully she can win a few Group 1s before then!”

He added: “A big thanks to Juddmonte. I’m very happy, we have no regrets on selling her. It was great theatre and [auctioneer] Alastair Pim did a great job as well.

“There’s a lot of people involved in her getting here. And don’t forget Suelita was the last mare that Dad bought – not a bad way to finish off buying!”

Her sale capped a busy day for Juddmonte Farms that saw the operation pay a total of 2,425,000gns for four foals, all fillies.

“It was always going to be expensive money for a filly like that, especially when you have a new Group 1 winner on the page,” said Mockridge. “Chaldean is very exciting and we were delighted to buy him from Whitsbury – the Harpers do a great job and I’m very pleased for Ed Harper and his team.

“The family want to reinvest in pedigrees, this is a very strong page and with Chaldean, who knows what could happen next year. She’s a slightly bigger horse than him and she has a great backside on her. And Kingman has had such a good season. He’s had two Group 1 winners and 14 individual Group winners – he’s going from strength to strength.” 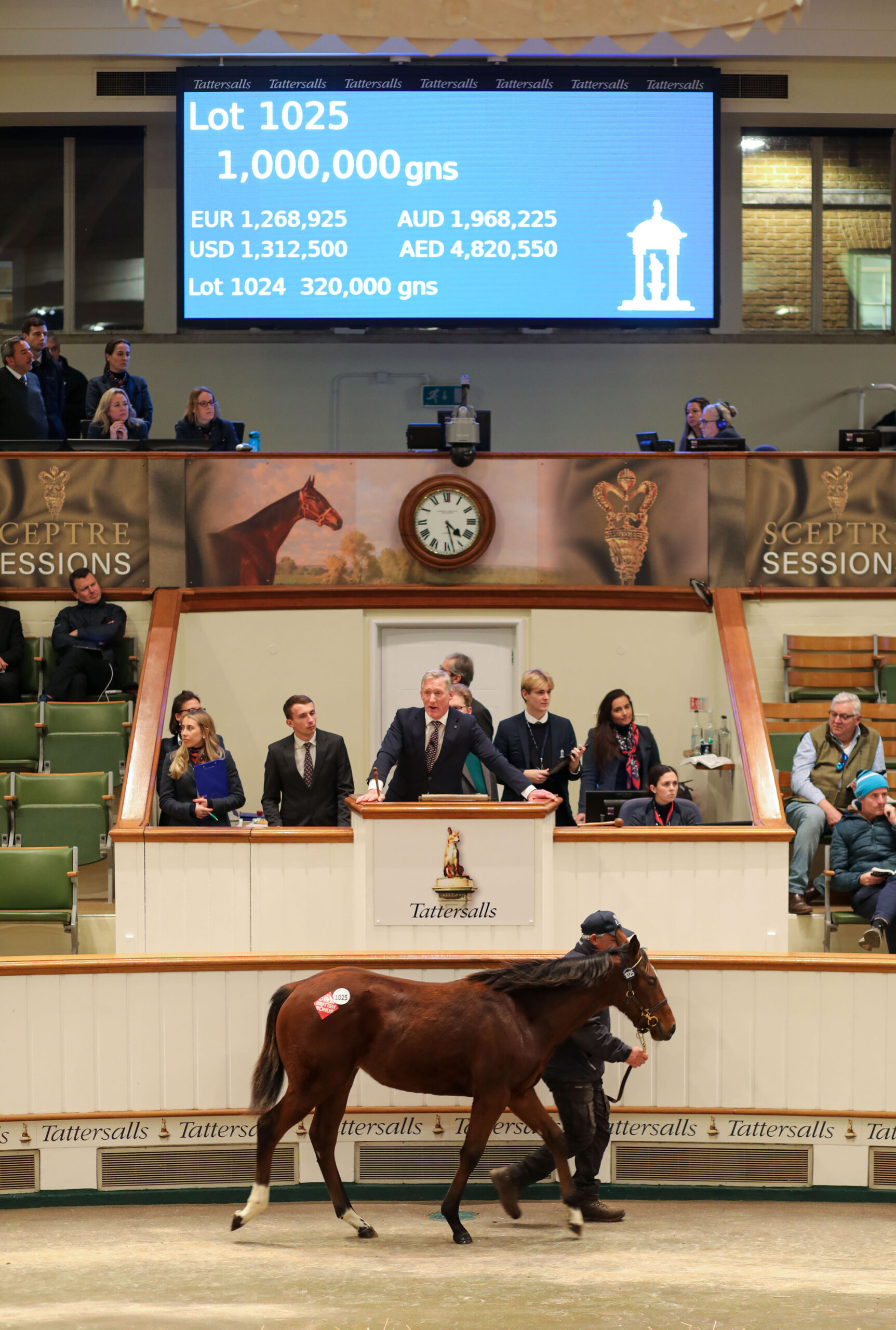 Juddmonte Farms went to 1,000,000gns for this Kingman half-sister to Chaldean. Photo – Tattersalls

A busy day for Juddmonte also saw them come away with a pair of 500,000gns fillies by Lope De Vega and Frankel.

The Dorset-based Langton Stud bred the Lope De Vega filly out of their 2016 Oh So Sharp Stakes heroine Poet’s Vanity. The filly follows two-year-old King’s Vanity as the second foal out of her dam, who is a half-sister to the Group 3 winner and stakes producer Lesson In Humility.

“It has been a few years getting here,” said the stud’s Giles Wates. “But we have got there now, we are on our way and the team have done a great job.

“We bought the mare with Richard Brown [for 150,000gns as a yearling] and she went on to be a very successful racehorse. Her first foal, by Kingman, has been retained and has gone to Andrew Balding. He and this filly are both similar in that they are athletic with big walks – nothing phases them.”

He added: “It is a real compliment that Juddmonte has bought her, and I hope now our farm is going the right way. We made a decision around ten years ago to sell the stock as foals and it has been a good move.”

As far as Juddmonte is concerned, the purchase of the Lope De Vega filly represents a long-term view, as Mockridge outlined.

“We thought we’d have to be strong on her but for us she is an outcross pedigree for the longer term,” he said. “She is a great athlete, a great walker, and has been well produced by Langton. She is a beautiful filly, hopefully she can be a race filly now and then come back home.”

Newbury-based Heatherwold Stud also enjoyed a terrific result courtesy of their sole foal on offer this week, a Frankel filly out of Awestometank. The second foal out of her Listed-winning dam, who also ran second in the Grade 1 Beverly D Stakes, she was also snapped up by Juddmonte for 500,000gns.

Another operation to enjoy a memorable result was the Dorset-based Selwood Bloodstock, whose draft was highlighted by a Kingman half-sister to the Group 2 winner Angel Vega sold for 425,000gns on behalf of Anita Wigan.

“It is the best price we have had for around ten years,” said Selwood’s James Read. “I am delighted, it is fantastic, but am really pleased for Anita Wigan, who bred her. She is a beautiful filly, and I am delighted to get Anita such a great price.” 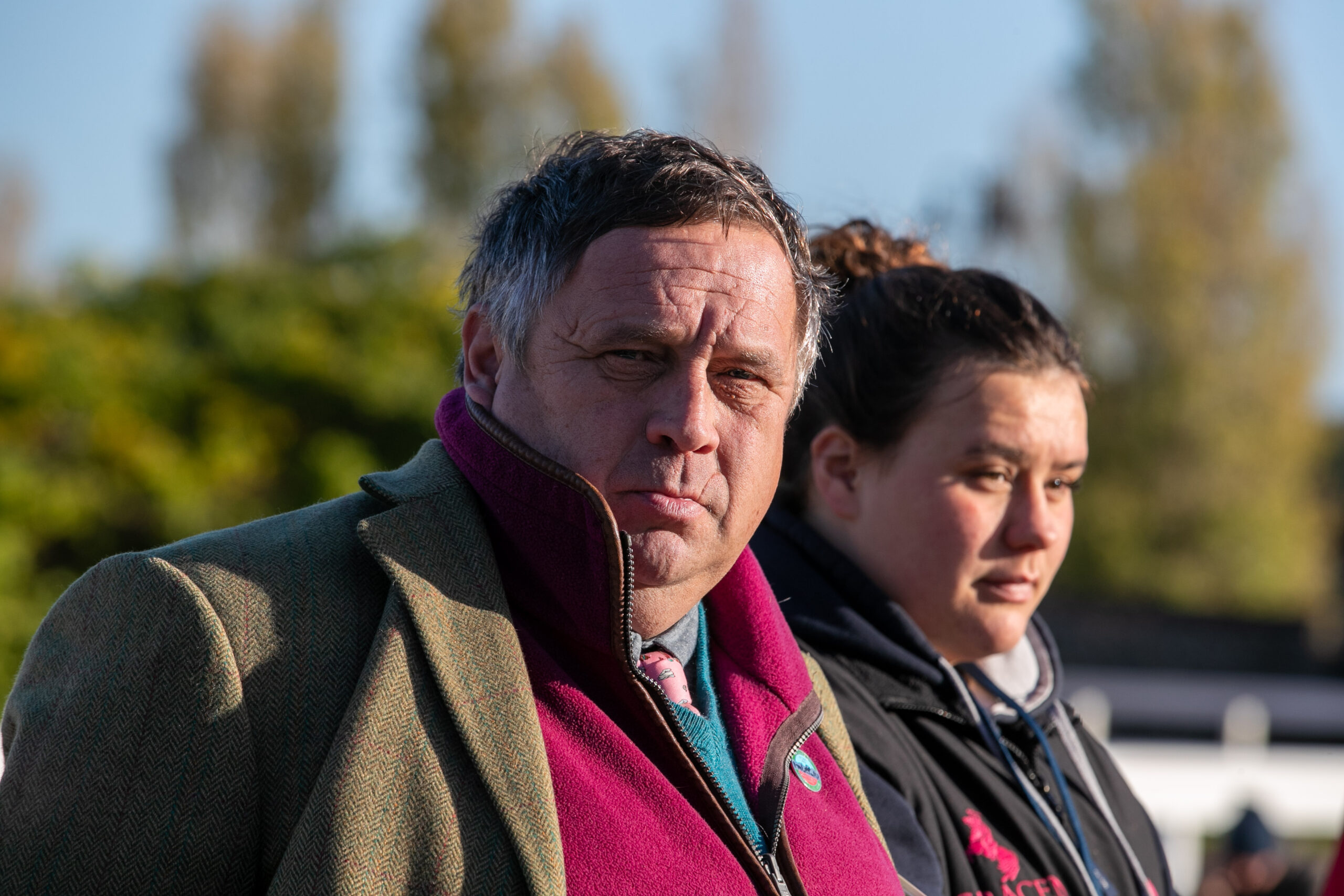 Giles Wates: his family’s Langton Stud had a day to remember. Photo – Tattersalls

Between them, Kingman and Frankel accounted for five of the day’s top six lots, with Frankel’s collection of high-profile sales led by a filly out of the multiple stakes producer Sunny Again for whom Moyglare Stud Farm paid 550,000gns.

“This filly is not a big, long-striding thing,” said Moyglare’s bloodstock advisor Fiona Craig. “But I know what Homeless Songs looks like, and I wasn’t trying to buy an Oaks winner, I was trying to buy something fast. We have plenty of slow things but speed it is so hard to find and she liked fast to me. The pedigree is great and Mount Coote is great – they’ve raised loads of good horses.”

The final day of the foal sale takes place tomorrow from 10am.

Up Next
Richard Brown named FBA agent of the year