Tattersalls staged the highest grossing European sale of all time when its three-day elite Book 1 of the October Yearling Sale saw 339 young thoroughbreds sell for a total of 70,343,000gns.

That tally included a world record yearling filly and new European record for a yearling when Lodge Park Stud’s full-sister to Oaks winner Was, from the immediate family of New Approach, was knocked down to Nicolas de Watrigant for 5 million gns. De Watrigant bought the daughter of Galileo for Sheikh Joaan Al Thani, who has also this season been buying yearlings through Peter and Ross Doyle Bloodstock. The Book 1 purchases were all made in the name of his Al Shaqab Racing operation.

The well-bred top lot beat a European record which had been set less than 24 hours earlier when Newsells Park Stud sold a Galileo colt, this one a brother to Oaks runner-up Secret Gesture, to Coolmore for 3.6 million gns. There was one other millionaire yearling in the sale – Corduff Stud’s brother to Arcano who sold to Shadwell for 1.1 million gns – while Dar Re Mi’s first foal, a colt by Oasis Dream, brought 850,000gns.

For a full report and analysis on the entire October Sale at Tattersalls, plus the Goffs Orby and Sportsman Sales, please see the November issue of Thoroughbred Owner & Breeder. 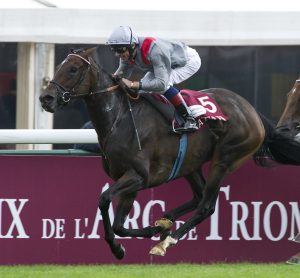 Up Next
Heads rule hearts at Longchamp