North Light to stand in Newmarket in 2014
Stories

The outstanding French filly Treve ran roughshod over one of the strongest fields ever assembled for the Qatar Prix de l’Arc de Triomphe to trounce Japanese superstar Orfevre by five lengths at Longchamp, with Prix du Jockey-Club winner Intello in third.

Trainer Criquette Head-Maarek last won the Arc in 1979 with Three Troikas, who was ridden by her brother Freddy, owned by her mother Ghislaine and bred by her father Alec. Thirty-four years later there was a similarly familial theme to events in Paris. Though Treve now races in the colours of Qatar’s Sheikh Joaan Al Thani, she is another Head family homebred and a descendant of Trillion, who was runner-up to Alleged in the Arc in 1978.

To gild the lily, Treve is a daughter of 2005 Derby winner Motivator, who has recently transferred from the Royal Studs to the family’s Haras du Quesnay in Normandy, which was also one home to the filly’s broodmare sire Anabaa. Another daughter of that late stalwart of the French stallion ranks also provided the Aga Khan’s last-gasp winner of the Group 1 Prix de l’Opera, Dalkala.

With the post-Arc celebrations still in full swing, Freddy Head made sure he wasn’t outdone by his sister by winning the Prix de la Foret with George Strawbridge’s outstanding mare Moonlight Cloud, who displayed a staggering burst of acceleration to mow down last year’s winner Gordon Lord Byron.

Now five, this could well be Moonlight Cloud’s final season in training but she owes her sporting owner/breeder nothing. This year alone she has recorded four consecutive Group wins, three of which have been at Group 1 level, to bring her tally of top-flight wins to six. She is also the horse who came closest to interrupting Black Caviar’s spotless career when finishing a head second to her in last season’s Diamond Jubilee Stakes at Royal Ascot.

As well as being trained by siblings, Treve and Moonlight Cloud also hail from the same family themselves, with Treve’s fifth dam Margarethen featuring as the fourth dam of Moonlight Cloud. Margarethen’s Derby-winning grandson Generous is another notable member of the clan. 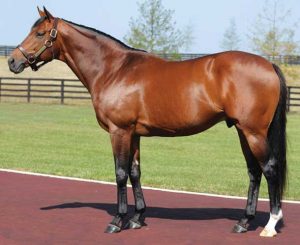 Up Next
North Light to stand in Newmarket in 2014