It has been revealed by a study published on Wednesday that racing has regained its place as the second-most attended sport in Britain.

Two Circles, the sports marketing firm that carried out the research, found out that 5.98 million people enjoyed a day at the races in 2016, the third highest figure in the last ten years.

Racing’s juggernauts – the Cheltenham Festival, the Epsom Derby Festival and Royal Ascot – all featured in the top ten most attended sporting events of 2016.

“It is very pleasing to see racing return to the second best attended sport in Britain against a backdrop of unfavourably wet weather during the first quarter and the competition of the Rio Olympic Games and Euro 2016,” said Stephen Atkin, Racecourse Association Chief Executive.

He added: “The five year growth trajectory highlights that a day out at the races continues to increase in popularity. As part of the Insight=Growth programme we have the broadest data warehouse of attendees in any sport. Through intelligent use of this data racecourses can now make targeted improvements to the raceday experience and grow attendances by attracting those who are aware of racing but have not previously considered attending.”

The survey also showed that record crowds over the Christmas period contributed greatly to the results. Over 200,000 people attended a raceday between December 26 and January 1.

In terms of atmosphere and customer satisfaction, racing outscored the average across sports by 0.4%.

Racing is one of the best value days out for families

Rod Street, Great British Racing Chief Executive, said: “The research reinforces the fact that racing a brilliant day out that caters and appeals to a wide range of people and is backed up by very encouraging 2016 attendance figures.

“We know from the work undertaken by Two Circles that in particular, racing has a higher percentage of female fans (39%) against the all sport average of 20% and this insight, together with the fact that racing is one of the best value days out for families, will inform our work in promoting racing to a very broad audience in 2017.” 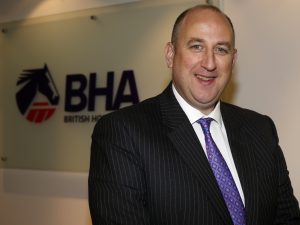 Up Next
Levy reform plans confirmed