The 42-year-old rode his first Royal Ascot winner aboard Ardad in the Windsor Castle Stakes last month for his boss John Gosden, a relationship 18 years in the making.

Winding the clock back two decades, a young Havlin made a promising start to his career riding 32 winners in 1996 while apprentice at Peter Chapple-Hyam’s in Manton. He lost his focus at a crucial stage, something which Gosden the successor of the Manton estate noticed very early on.

“The first time I met him, his BMW was lying on its side in a hedge,” reflected Gosden. “He’d climbed out of the passenger side and I remember telling him it was best to leave the car where it was at that time of the night. Like a lot of young people, he had his wild side. There’s nothing wrong with that.”

When Gosden announced he was moving to Newmarket in 2006, Havlin felt the ground shifting under his feet but after some soul-searching decided to up sticks and make the uncertain move to Flat racing’s headquarters.

Fast forward to the present, the Scotsman who has always partnered top-class horses at home is now riding a better calibre of horse on the racecourse. Last season was his best yet in the saddle with 73 winners from more than 500 rides, which included three Group 2’s.

He remains a team player at heart and while some have encouraged him to loosen his ties with Gosden in quest for greater recognition, this prospect has never appealed.

For Havlin, all that remains is to savour the twilight days of a career which is now bearing the fruits of hard labour down the years. 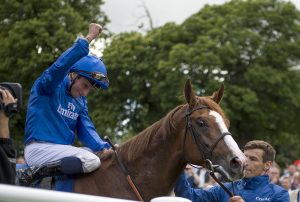