The Longines World’s Best Racehorse in 2016 was handed the one stall under Mike Smith with his arch rival California Chrome – who finished runner-up to him in the Breeders’ Cup Classic – drawn widest of all in stall 12.

From the outset, the son of Unbridled’s Song was ridden to take a handy position in third behind the leader Noble Bird.

Down the back stretch Arrogate and California Chrome were side by side, yet the race changed complexion as the field entered the far turn.

Smith made a move three wide on the favourite and took the lead three furlongs out.

With California Chrome losing ground and places, Arrogate went clear keeping on strongly to the line to win by nearly five lengths from runner-up Shaman Ghost.

From only seven lifetime starts, the Juddmonte-owned superstar now takes his career earnings to over £8.4 million, with £5.6 million coming from this race alone.

“If I could make the lead I was going to try to but if not I wanted to be able to save ground and get into a nice comfortable stride down the back,” reflected Smith.

“Halfway down the back straight I noticed California Chrome was not up next to me and I looked back and saw Victor kind of nudging so I knew he wasn’t firing today. Going into the far turn I was able to use that angle and tip out and once I got out I was loaded.”

In terms of targets this year, Baffert has stated that top priority is the defence of his Breeders’ Cup crown and the Pegasus again in 12 months time.

Baffert said: “I’m so relieved, down the back side he was trapped in there, (but) when he started making that move I knew right there, what a superior horse he is. I feel bad about California Chrome, he just didn’t bring his race today so that match-up never came about.

Once I got out I was loaded

The 2014 Kentucky Derby winner will now be retired to stud at Taylor Made Farms in Kentucky. 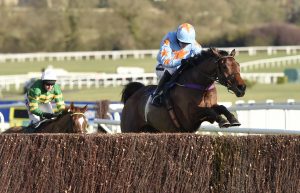