The deal, which also includes the stud’s bloodstock, was brokered by Windsor Clive International and announced on Monday.

Smith-Bernal is a leading figure in legal technology having revolutionised the operation of law courts, tribunals and arbitrations around the world through his company Opus 2 International a decade ago.

During that period, Smith-Bernal has become a racehorse owner and breeder in his own right and has been a client of Newsells Park Stud for the last six years.

Formed of 1,200 acres, the Royston nursery was originally acquired by the late Klaus J. Jacobs and has developed into a leading operation having bred the likes of Oaks heroine Legatissimo and been co-breeders of 2019’s Prix de l’Arc de Triomphe hero Waldgeist.

Smith-Bernal said: “Newsells Park Stud dates back almost a century and is part of the fabric of British and international horseracing.

“As an existing client, I have had the pleasure of witnessing at first hand the meticulous professionalism, attention to detail and service provided by Julian Dollar and his team, both in preparing horses for racing and yearlings for the sales ring.

“I consider it a huge honour and a privilege to have acquired Newsells Park and look forward to building on the legacy of Klaus J. Jacobs and the previous owners, to ensure that the stud remains at the pinnacle of breeding and racing.”

Nathalie Albin-Jacobs, Chair of Newsells Park Stud until the sale, added: “Newsells was a passion of my late father’s. He would have taken great pleasure and pride in the stud’s many successes and especially Waldgeist’s win in the Arc in 2019 which would have been the culmination of his ambitions as a breeder.

“The time has come now for my family to focus on our other businesses, and we know that with Graham, the stud will find a passionate and successful custodian and owner of Newsells Park for a new successful journey in both in maintaining and building further on its many achievements.”

Julian Dollar, General Manager of Newsells, said: “The team and I are very grateful for the vision and investment made by the Jacobs’ family to date, which has seen the stud grow to be one of Europe’s foremost commercial stud farms.

“We now really look forward to working for graham and making the most of this excellent opportunity to further develop Newsells Park Stud as a leader in its field worldwide.

“We will continue not only breeding, raising and selling exceptional racehorses, but also offering domestic and international clients professional boarding services, sales preparation and top-class stallions.” 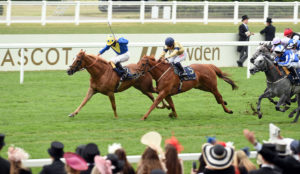 Up Next
Third time lucky for Dream Of Dreams