Twice the bridesmaid in the last two runnings of the Diamond Jubilee Stakes, the Sir Michael Stoute-trained Dream Of Dreams made it third time lucky when capturing Saturday’s feature race at Royal Ascot in gutsy fashion.

The seven-year-old, owned by Saeed Suhail, had to work hard for his victory though as Hollie Doyle and Glen Shiel looked to have stolen the contest from their grasp but under the drive of jockey Ryan Moore, Dream Of Dreams dug deep to win by a length.

Stoute, who is Royal Ascot’s most successful trainer, said: “I am delighted – the horse deserves it. The past two years, he has been beaten a head finishing fastest of all, so I am really thrilled for him.

“He has got more and more relaxed; he doesn’t go to post like a sprinter, does he? I thought he was going to pull up halfway down. He is more relaxed, and a little better. He’s fully developed and strong now. But it’s his mind – he’s really, really chilling.

“He loves a little cut in the ground, but I don’t think he’s run on ground quite as soft as this, so I was a little concerned. Ryan [Moore] had it all planned, and it all worked out, and told me what he was doing, so I said, kick on.

“Any winner here is a great thrill, particularly a Group 1. But additionally, this fellow has just been touched off twice, so I’m pleased for him – he deserves it.

“I thought I wasn’t going to have a Royal Ascot winner this year – this is the last runner we’ve got. It’s been tough – it’s always been tough, but it’s tougher.”

Moore added: “Sir Michael has been great to me throughout my whole career. He has got this horse, who is seven now, to perform here three times in a row and it’s great that he’s able to win today.

“Dream Of Dreams has been a great horse. He has got better every year. A stiff six [furlongs] with cut in the ground, it’s perfect for him.

Moore had struck earlier on Saturday on board the Aidan O’Brien-trained Point Lonsdale, who overcame signs of greenness in the Listed Chesham Stakes.

For a while in the home straight it looked like Reach For The Moon would strike for the Queen, who was in attendance at the Berkshire track for the first time this week, as Point Lonsdale struggled to get going.

But as they entered the final furlong it was Point Lonsdale who overturned the deficit, despite drifting to his left, to win by half a length from Reach For The Moon. There was a further three and a quarter lengths back to Great Max in third.

Trainer Aidan O’Brien said: “We are delighted with Point Lonsdale. He obviously had had only one run at The Curragh, and he’s still a bit of a baby. Ryan gave him a lovely ride.

“Rachel, who rides him every day, Seamus, who rides him in his work, Alex and John, everyone’s always been happy with this horse and thought a lot of him.

“It’s unusual for an Australia to be that forward, with a pedigree like his, which is a middle-distance pedigree. From day one, he always showed an awful lot of speed and was obviously out very early for an Australia. It all was very natural, the way he did everything. He’s a typical Australia in that he’s full of that Galileo [style] – his head goes down and he’s really genuine when you ask him, and he digs very deep.

“We were worried about the ground a little. Broome [his full-brother] bends his knee a little bit, but this horse doesn’t and is a low, slick mover. None of those horses in that race would have encountered ground like that before.

“We have the Tyros, Futurity, National, Dewhurst. All those races are open for him, and we’ll see what the lads want to do.

“You’d be hoping he’d be a Classic horse, and being able to do that, a Guineas, Derby-type horse. That’s what we’d be hoping for.”

Moore recorded his third winner of the day when partnering Stratum to success in the closing Queen Alexandra Stakes.

Wonderful Tonight showed why she is an exceptional filly with juice in the ground when she demolished her rivals to land the Group 2 Hardwicke Stakes.

Her performance was even more impressive as it was her first start of the season and when William Buick pushed the button to go just before the final two-furlong marker, Wonderful Tonight zoomed into the lead.

There was to be no catching the daughter of Le Havre as she won by one and a half lengths from Broome with the same distance back to Hukum in third. It was a result that provided her owner Chris Wright and trainer David Menuisier with their first Royal Ascot success.

Menuisier said: “Wonderful Tonight is an absolute champion. I couldn’t be bullish in the press before the race because she was always going to improve for the run.

“She was running against tough opposition with the benefit of at least one run, so you always have to be on the side of caution, but she is amazing. I didn’t know what to say in the last 50 yards, it gave me a great sense of pride.

“Wonderful Tonight showed a tremendous turn of foot which she perhaps never showed before. I am very proud of the team, proud of the filly and also proud it is the only day Her Majesty came to this week, so I’m pleased she got to see this filly live. 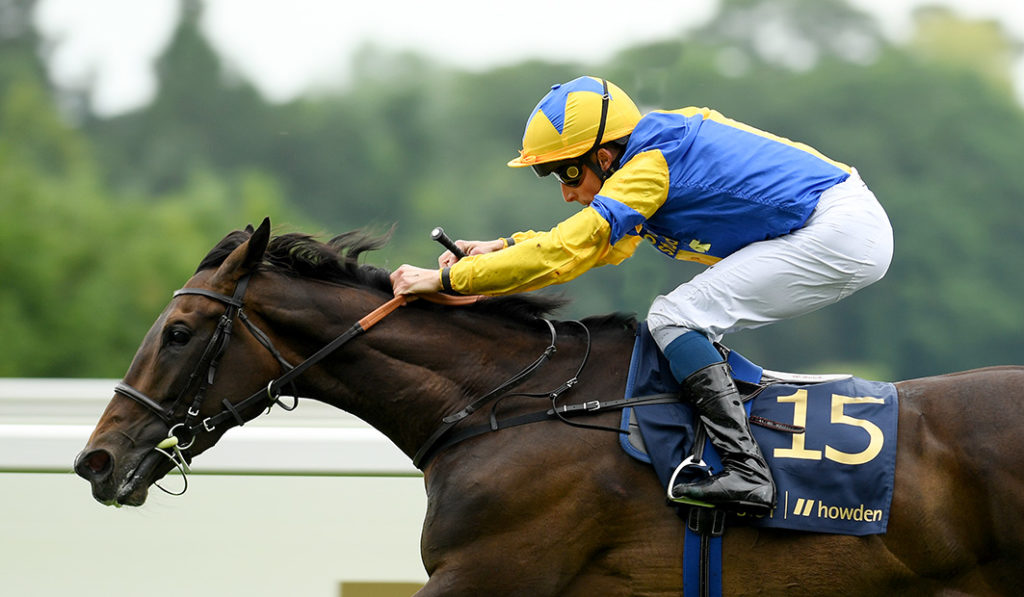 “The fact that she handles soft/heavy ground so well compensated for the lack of fitness today. Can I go as far to say she will show the same traits on good ground? I don’t know. Perhaps we will try in the Prix de l’Arc de Triomphe if the ground happened to be good. Would we try her on good ground before that? I don’t know. She loves Longchamp and Ascot so we will keep an eye on all the races she can run it at both venues.

“The King George was run on very soft ground last year. The Hardwicke was not the plan until last week and at the confirmation stage I saw that there was rain forecast and we decided to keep her in. Sometimes you need to be lucky as well!”

“I wasn’t expecting her to win, the trainer had managed my expectations and he had also managed the expectations of the entire punting public in the Racing Post by saying that she was at 80/85 per cent fit. Maybe she was, I don’t know, but didn’t she win so well! What a filly she is, that was unbelievable.

“It means everything, actually. There are winners and winners, but a Royal Ascot winner… I’ve won a lot of very good races, but to win at Royal Ascot is like I’ve died and gone to heaven.”

Rapid improver Creative Force continued his progression as he stretched his unbeaten run to four this season when an authoritative winner of the Jersey Stakes for trainer Charlie Appleby and jockey James Doyle.

Graduating to Group 3 company for the first time proved no problem for the gelding as he led home his stablemate Naval Crown by a length and a quarter. There was a further three-quarters of a length back to Vadream in third.

For Appleby it was a second winner of the week and he said: “Both horses turned up in great order and full credit to the team. I worked them together probably about ten days ago and said to Marie [Murphy] and Alex [Merriam], the assistants, ‘We don’t want to be doing that again’, as they are both very genuine horses and it was a stronger piece of work than I ideally wanted. But it just showed their wellness. 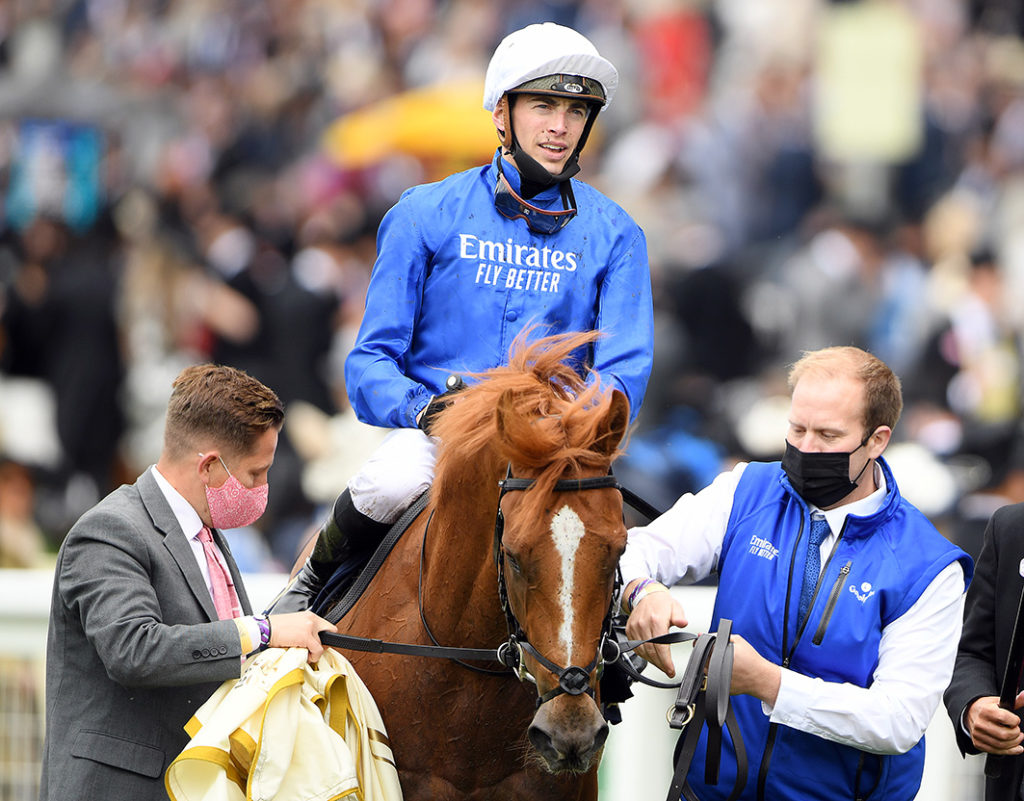 “From William’s point of view, he knew when he chose Naval Crown… he said to me ‘Charlie, it is such a hard choice – I’m going to do what I’m going to do and it could tee up quite nicely for Creative Force’. Full credit to everybody, full credit to the lads, they’ve given both of them a great ride, and it’s obviously nice to come here and have a one-two.

“We were hopeful on Creative Force’s pedigree and what he has shown us at home in his attitude – and the way he is finishing out in his gallops and his races – that stepping up to seven furlongs would be within his realm, and he’s gone and duly obliged today.

“James has given him a lovely ride. He knew he had to sit and be patient on him stepping up over this trip and on this ground, and as James said on his way in, he is a very brave horse. I’m delighted first and foremost for the team – it’s great to get a second winner on the board this week.”

Evans said: “It feels a lot different having a Royal Ascot winner – it’s a great feeling. I don’t know what to say really.

“I couldn’t really see the race. I was watching the big screen and couldn’t see a thing. I saw his white face early on and could see he was on the back of the bunch, but couldn’t see anything later on until about the last 100 yards.

“Rohaan is a serious horse – it would have been nice if he could have run yesterday in the Commonwealth Cup, but it’s lovely to win this race. I was always confident, but you never know what the field is going to do during the race.”

Kelly added: “I am overdue, and probably should have had one [a Royal Ascot winner] before now, but that’s history. It was a great performance from the horse, he’s an incredible horse. He goes on any ground but handles this particularly well.

“I am delighted for the horse’s new owner [Chris Kiely], and for David Evans. It’s a remarkable story and I had the easy part. The rest is history.

“That’s Rohaan’s style of running – when Ryan Moore won on him here, he did that; he’s just lazy early. I was worried a little early doors, just that he wasn’t taking any interest and I had to squeeze him a bit, then he came back on the bridle and obviously the further he went, the better he was.

“He just comes alive when you need him and slices through them; he just picks them up so easily. He gets through soft ground like it’s good ground, and it’s hard work – it’s tacky, gluey, but he slides through it like it’s good, fast ground.

“This has got to be right up there [with his best wins] – I know it’s only a handicap, but it is Royal Ascot. I’ve had a few near-misses, probably should have had a winner before now, but that’s history and it’s about today, and fair play to all connections.”

Murphy’s mount veered right markedly once taking the lead, but the jockey was able to react quickly to correct his mount and get him back on track to win by two and a quarter lengths from Visualisation. Irish Legend was a length behind in third. 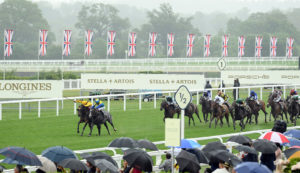 Up Next
Drama on Royal Ascot’s penultimate day